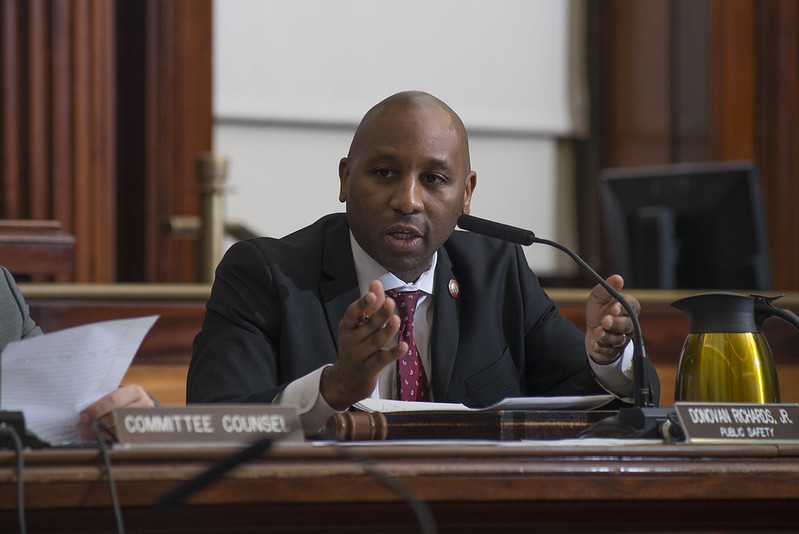 The lack of coronavirus testing sites in poor communities and particularly communities of color is costing black and brown New Yorkers their lives. There is no clearer example of institutional racism than the different infection and mortality rates during this crisis. It is a scar on our nation and our city. In areas of New York City that already experience the highest rates of asthma, diabetes, and other underlying conditions, this virus has already proven to be a death sentence.

Furthermore, it is people of color who are the essential workers keeping society going in this incredibly challenging time. But as the state and city grapple in the near future with restarting the economy, communities of color already starved for capital because of institutional insidiousness will rebound at a slower pace and face greater challenges.

Proactive measures such as identifying those who have the coronavirus but are asymptomatic and those who are free of the virus will prove critical in flattening the curve in the hardest hit areas of our city and giving us a fighting chance. Every country that has managed this crisis has done so with mass testing. This is step one in rebounding. We must contain the virus to stop the spread, and monitor the virus to turn the corner.

This is why leaders throughout our city are calling on the de Blasio administration to immediately ramp up testing, and it must be done in communities of color first given that so many of our neighbors are those who’ve been commuting to work while so many others stay home.

How is it that neighborhoods from Corona to Southeast Queens to the Rockaways have not one testing site?

We know who has found it is easy to get tested. The wealthy and well-connected, professional athletes, TV personalities, and many others, but sadly average Americans risk their health waiting in line for the limited testing available to less powerful New Yorkers.

We live in the epicenter and we are not testing. The outrage has no words. It is a scandal and it is costing us lives. Imagine if the epicenter were only in Manhattan? We would be testing door-to-door, with federal, state, and city focus unlike what we’ve seen.

And while I won’t pretend to be an expert who knows all the solutions for how to defeat COVID-19, I don’t have to be to look at the places that have successfully contained the virus and know what essential steps seem clear. New York should look to Taiwan and Germany, for example, and move quickly to emulate them.

Their successes have largely hinged on effective testing and tracking strategies. The more micro-data we have as a city, the better our chances of defeating COVID-19.

This is why universal testing for all must be taken more seriously by the de Blasio administration. So far the mayor has been reluctant to expand testing, because of a limited supply coupled with his belief that more testing will increase the spread of the virus in neighborhoods due to more symptomatic people traveling outside the home. The argument doesn’t hold up well when hospitals are being overwhelmed by people rightfully showing up at their doors begging to be tested. If you don’t believe me try visiting Elmhurst, Jamaica, or St. John’s Hospitals, among others.

The administration’s wishful thinking and calls for social distancing won’t stem the tide for black and brown communities, who often don’t have the luxury of isolating in a separate bedroom from other family members.

For those of us who grew up or are growing up now in a one-bedroom apartment with several family members in limited space, it isn’t hard to understand that everyone in many households have been compromised when an infected person is instructed to just go or stay home.

This especially endangers our vulnerable seniors, and this is why we must know who is infected but asymptomatic immediately. This can only be achieved through testing.

The bottom line is that without universal testing for all, this pandemic will be slow to recede tremendously in the most vulnerable corners of our city. And while I recognize that the federal government has been a complete failure, I want to see the city and the state do more. It’s good to hear the mayor and governor say widespread testing will be key to reopening schools and businesses, but we need more testing now in our communities of color.

The racial and ethnic data finally released by the de Blasio administration this week showed terrible if unsurprising disproportionate impact in communities of color, and the response from the mayor was welcome but late and short of what is needed. Black and brown communities need testing now.

In the face of the damning racial and ethnic data released by the city and state on Wednesday, the governor’s Thursday announcement that new testing sites in communities of color, including two in Queens, will open next week is welcome, though they will be by appointment only.

Resources such as access to food and rental assistance must also be concentrated in underserved communities. Anything less is not an option, if we want to successfully flatten the curve and save the lives of every New Yorker in our city.

Eventually, when the smoke clears and our city returns to any semblance of normalcy, there will be no shortage of public hearings and legislative packages passed at all levels of government. The government must be focused on demographic data and increase spending to improve the quality of life in low-income communities now and in the aftermath of this crisis.

Otherwise, the city will be incapable of ever stopping the spread of any virus that finds itself in the so-called progressive capital of the world. Because as the old saying goes, when America gets a cold, communities of color get pneumonia.