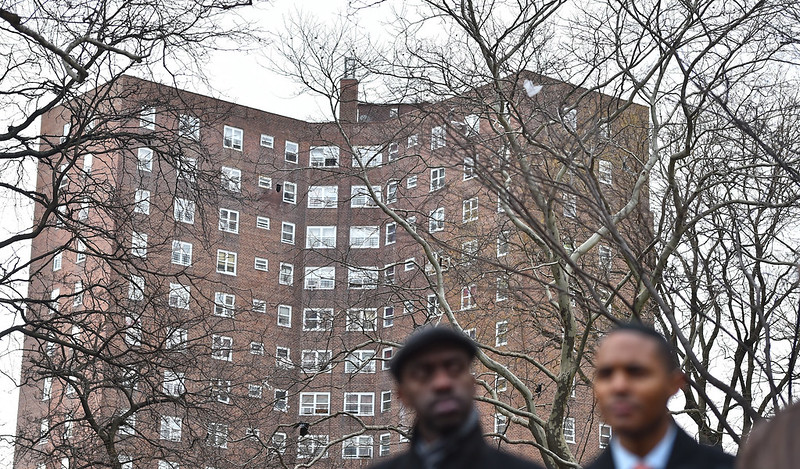 In late April, Mayor de Blasio announced a plan to deepen the city’s response to COVID-19 at NYCHA public housing. The plan includes distributing face coverings and gloves to all residents, enrolling all NYCHA senior buildings in the city’s food delivery program, and providing free tablets and internet service for 10,000 senior residents.

It’s long been clear that issues at NYCHA are pervasive, including disgraceful mismanagement of public money and the authority’s crippled system of communication with tenants, which is now more fully showing its limitations. Several weeks after de Blasio’s announcement, NYCHA residents throughout the city were still waiting for components of the plan aimed to support them in this new reality.

NYCHA resident leaders in the South Bronx, for example, have verified that since the hiring of outside contractors they have seen an overall increase in sterilization of their development, however touchpoints like elevators, mailboxes, and door-knobs are not sterilized on a regular basis.

NYCHA’s 2,200 buildings, like the public transit system, senior centers, and other often crowded areas, are potential virus hotspots. It is unacceptable that we do not have widespread testing at NYCHA developments -- an intentional effort by the city is past due.

COVID-19 has hit poor communities, black and brown folks, the hardest across our city. In a post-shutdown city, NYCHA residents must have comprehensive protections against both the virus and the ever-present epidemic of decades-long disregard and disinvestment. NYCHA residents must be afforded ample opportunity for testing and isolation when needed.

According to the Centers for Disease Control, some of the risk factors associated with COVID-19 are age (65 years or older) and conditions including chronic lung disease or moderate to severe asthma. NYCHA tenants regularly report asthma issues and cockroaches, which are an allergen source and an asthma trigger. NYCHA, which has not released a strategy for tracking COVID-19 infection rates, has left residents, building staff, and advocates to highlight the extent of the crisis.

The Housing Authority has bragged about posting updates to their website and social media accounts; sending out emails and alerts through its MyNYCHAapp; posting multilingual fliers in common areas; and scheduling robocalls and in-person outreach. In mid-March, NYCHA said it would start disinfecting its senior buildings five times a week, and all other buildings three times a week. NYCHA residents in East New York, Brownsville, and the South Bronx tell us they haven’t seen this happening with the care (and in some cases the frequency) the Authority has promised.

NYCHA has hired outside contractors to disinfect high-touch areas like elevators, but is still relying on its on-site caretakers to clean the rest of its buildings. The people responsible for keeping housing complexes clean, have themselves been sidelined by unsafe working conditions.

When it comes to the plan released by Mayor de Blasio, which promised PPE to all residents, among other precautions and protections, there has been a disjointed narrative and implementation, necessitating that NYCHA Tenant Association leaders across the city step up when the city has fallen short -- from handing out PPE to meals, NYCHA residents have exemplified a collective will.

NYCHA tenants in the South Bronx, East New York, Brownsville, and all across our entire city deserve housing that is safe, healthy, and secure. As the current lockdown ends, we will need to ensure that our NYCHA communities have all the resources that they need. A comprehensive post-shutdown NYCHA plan must include:

Our vulnerabilities have been further exposed by COVID-19. We need to move away from a reactive society to a proactive society. Our leaders must have the political courage to plan for a future where the government both anticipates better and responds more aggressively and efficiently to emergencies, ensuring that our most vulnerable communities are not disproportionately impacted.