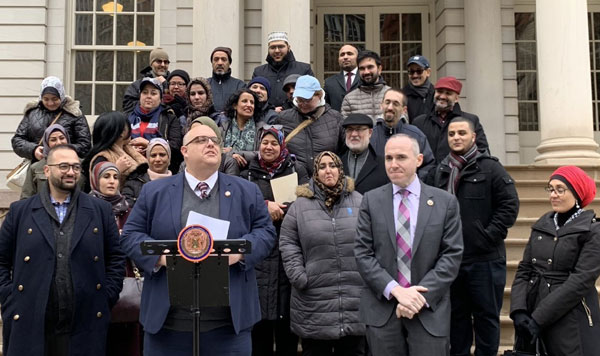 Council Member Justin Brannan, the author, with constituents and allies

As the City Council Member representing the 43rd District in Brooklyn, I represent the largest Arab community in the City of New York. This community has weaved itself into the complex fabric of my district, especially in Bay Ridge, where our avenues are lined with Arab-owned businesses, and several non-profit organizations that have been serving Arab-Americans and Arab immigrants for decades. I am proud to serve this community, and proud that its members are a part of what makes our district so unique.

Which is why every time Election Day rolls around, when I start to get calls from constituents complaining that there is once again no Arabic translation available at poll sites, I am totally distressed. Despite major efforts by groups attempting to turn out the Arab vote in recent years, voters continue to show up at the polls hoping for assistance, only to be turned away. Not only are translators not provided, but if campaigns or other organizations try to bring in their own to assist a voter, they are summarily denied access to the polls. It is clear the Arab community wants to vote and wants to participate, but its members are not given the assistance they need to fully do so.

The problem: in order to ensure ongoing translation services in a particular language, a community has to reach a threshold percentage of residents who speak that language, and the state Board of Elections will then consider adding that language to the ballot. Unfortunately for my district, this data comes from the Census, which presents a unique challenge for the Arab community, because “Arab” is not an option on the Census – Arabs are told to check “white.” This has led, as I have written in the past, to countless issues of under-representation and underfunding for our neighborhood – it simply looks like a large community of color does not live here when, empirically, anyone who spends more than five minutes in my district knows that is not the case. And the fact that this year’s Census looks like it will lead to a drastic undercount does not bode any better for the next decade.

In absence of state-level action on this issue, I introduced legislation in 2018 in the hopes that the City would provide the funding and staffing for supplementary translation services at the polls – as they do with several other languages that haven’t met the state thresholds, like Russian, Polish, and Yiddish. While City Hall has shown little interest in making this happen, the new city Civic Engagement Commission has finally made some progress -- it will pilot a new program this election cycle, which will provide Arabic translation separate from the Board of Elections at four poll sites, including the last two days of early voting (October 31 and November 1).

This is great news for our district, but it is not a permanent solution. We need reliable, regular language translation for Arabic speakers at our poll sites.

Translation at the polls is not a luxury or a privilege. Every citizen has a right to vote, and it is a right that new Americans deeply treasure. New Americans go through months of study, English classes, paperwork and appointments, and expensive filing fees to be able to become citizens – so when the time comes to vote, can you blame them that they want to participate and do it correctly? Specifically, so many of my constituents come from countries whose implementation of democracy is unreliable at best. They want to vote the way they wish, they want to vote correctly, and they want their vote to be valid and secure.

I often hear criticism that we shouldn’t need translation at the polls, because anyone who is a citizen passed an English test, and at this I cannot help but laugh. Ballots in recent years have been multiple pages long, they’ve included information on city- and state-wide referendums that are described in multiple paragraphs in barely readable fonts, they’ve included ballots that instruct you to choose multiple judges, or multiple presidential delegates – three candidates in one column, one in another. It is enough to confuse many native English speakers and lead to many invalidated ballots! Yet, all of these are choices that any citizen who pays taxes and participates in this community deserves to weigh in on, and they should not be prevented from doing so because of their level of English reading comprehension.

When we do not assure a community that voting will be easy, safe, secure, and valid, a community will not show up in its full capacity. And that’s the case with ALL communities. When voters hear about long lines at poll sites, invalidated ballots, broken machines – they don’t show up. Language access is no different. By refusing to have Arabic translation at the polls, we are telling the Arab community – a community that has fought so hard for representation – that its votes do not matter. We simply cannot do that in our modern democracy. Not for any community, but certainly not for one with so much on the line.

The Arab community has a lot at stake in this election. Its members’ home countries are in the midst of political upheavals, viruses, economic upswings and downturns. In the U.S., federally, they face the prospect of restrictions to immigration reform, travel bans, and a rise in Islamophobia. And locally, these are families who want to have a say in who represents them in elected office, their schools, their public transportation systems, their housing. It is unjust that the Arab community is so often the subject of headlines, but its members are being denied an opportunity to control their futures.

While I’m glad that Arabic translation will be provided at a few poll sites this year thanks to the efforts of the Civic Engagement Commission, it is crucial that we get this pilot right, and that we come up with a permanent solution for all poll sites. It is the right thing to do at any time, but particularly when so much is at stake.

***
Justin Brannan is a member of the City Council representing parts of Brooklyn. On Twitter @JustinBrannan.