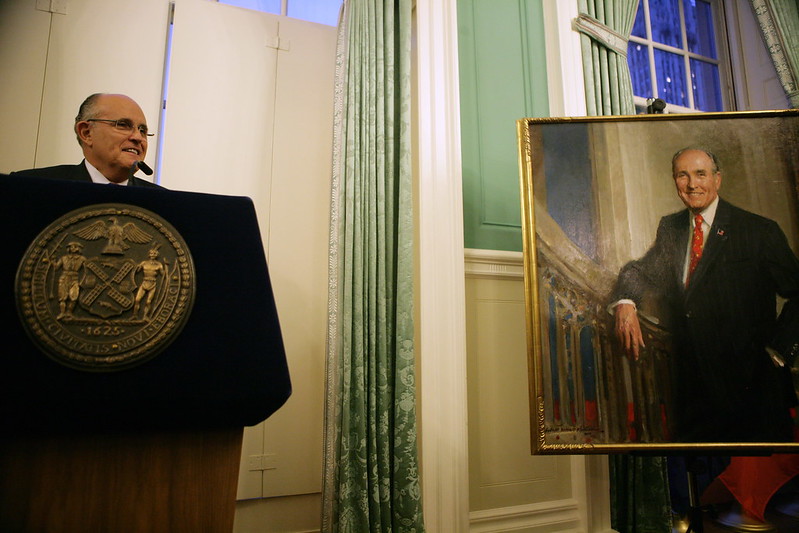 As Rudy Giuliani melts down – at times literally – in his desperate crusade to steal the election for his soundly defeated First Client, there has been much speculation about how “America’s Mayor” could have deteriorated into this spectacle.

Whatever may be going on with Rudy Giuliani personally, let’s be clear: while, for one brief moment in his career he served as a cheerleader for a devastated city and a shocked nation, the rest of Rudy Giuliani’s mayoralty was driven by a hostility to free expression, police brutality and violence, and an authoritarian disregard for democracy.

Let’s start with the First Amendment. The New York Civil Liberties Union was involved in 34 First Amendment lawsuits against the Giuliani administration – and prevailed in 26 of them. Those cases successfully challenged the firing of Police Officer Yvette Walton in retaliation for testifying before the City Council about racial profiling; the attempt to censor the Sensations exhibit at the Brooklyn Museum; the ban on press conferences and demonstrations by Giuliani critics on the steps of City Hall; the ban on condom distribution as part of AIDS education in City Parks; police harassment of homeless people sleeping on the steps of the Fifth Avenue Presbyterian Church; and singling out political demonstrators charged with minor offenses so that they could not get appearance tickets to return to court and often had to stay in jail overnight.

In the seven-and-a-half years before 9/11, let there be no mistake: racial bias, fear-mongering, and police brutality were the hallmarks of Giuliani’s mayoralty.

As mayor, Giuliani oversaw a policing regime repeatedly engaged in persecution and brutal assaults and killings of Black and Hispanic New Yorkers, using unlawful stop-and-frisk policies to jail Black and Hispanic New Yorkers in service of his ‘broken windows’ policing. Every time the NYPD killed a Black man, Rudy Giuliani was right there not only defending the police, but attacking the victim.

I will never forget his tirade against Patrick Dorismond, a 26-year-old Black security guard and father of two, after undercover police officers killed Dorismond after initiating a scuffle while on the job in Manhattan. Giuliani attacked Dorismond’s character and publicly revealed his legally-sealed juvenile record. It was Giuliani‘s notorious street crimes unit that killed Amadou Diallo in the lobby of his apartment building.

And in his second of three runs for mayor, his virulent support for the police union in its opposition to an independent Civilian Complaint Review Board (CCRB) that would hold officers accountable for abuse, culminated in a speech at the union’s off-duty rally steps from City Hall that ended in what can only be described as an rampage by our “men – yes men—in blue” so egregious that it pushed the City Council to establish the city’s independent CCRB.

Perhaps one of Giuliani’s most telling pre-Trumpian moments was his campaign to put cops in charge of discipline in New York City public schools. While violence in schools was actually declining in 1998, Giuliani withheld crime data from the Board of Education and convinced its members to replace the Board school safety unit with the NYPD’s school safety division. This eventually mushroomed into its own police force of over 5,000 officers who arrested and beat kids up for offenses like being in the school hallway without a pass or refusing to close a book in class.

Giuliani brought broken windows policing from the streets of Black and Hispanic communities into the public schools attended by Black and Hispanic children, launching the policies and practices that came to be known as the school-to-prison pipeline.

As the remnants of the World Trade Center smoldered, Giuliani, who was ineligible to run for another term, had been basking in the glow of public appreciation for his leadership. In that moment, in a troubling precursor to Trump’s threats to remain in office, he reportedly proposed that New York postpone the 2001 mayoral election and leave him in office, rather than allow New Yorkers to vote in the scheduled election and transition to a new mayor. Despite the fear and uncertainty that followed the horrific 9/11 attacks, New Yorkers weren’t fooled.

To be fair, there were two areas where Giuliani, as mayor, brought New York closer to our democratic values: immigrant rights and access to abortion care. But the defender of Trump’s Muslim ban and other xenophobic and discriminatory policies seems now to limit his love for the American melting pot to only those who look like him. And while he once supported abortion rights that too seems to have dissolved as he sinks deeper into the right-wing fever swamp.

We are not witnessing the deterioration of “America’s Mayor.” Today’s Giuliani is simply an extension of the authoritarian leader that New Yorkers have known all along.

***
Donna Lieberman is the Executive Director of the New York Civil Liberties, the state affiliate of the ACLU. On Twitter @JustAskDonna of @NYCLU.