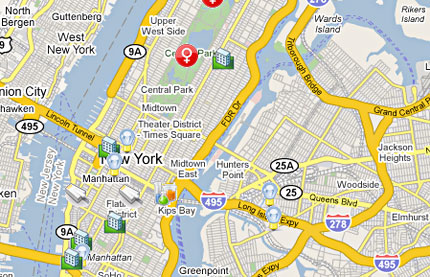 To view our community incubator Google map, click here To add to the map, go here

When Michael Bloomberg was fired from Salomon Brothers in 1981, he used the opportunity to create his own business and become one of the richest people in America. Now, with an estimated 65,000 Wall Street employees facing the ax, he is encouraging them to follow in his footsteps.

"Time and time again, history has shown that our city rewards those who have the courage to pursue their dreams and launch new ideas," the mayor said when he announced his plan to revive the financial industry last week.

The plan would provide retraining for those who lost Wall Street jobs, offer seed funds for start-up companies, and attempt to woo banks and financial firms from other countries. To help new businesses thrive and grow, the city would create incubators, spaces where entrepreneurs could find affordable office space and have access to basic services and administrative support. Also announced was a network of available space for incubator clients called the Coalition of Space Providers.

For years, advocates in New York have been seeking official recognition of the contributions they think incubators can make to economic growth. And the city already is home to many incubators of different types and sizes. So how effective are they, and what is the best way to harness their potential?

(Go here for a map of all the city's incubators. Do you know of any incubators in New York City that should be on our map but aren't? Go here to add them.)

Incubators generally offer management guidance, technical assistance and consulting to small companies. Often they provide cheap or free space, but "virtual" incubators that provide services remotely -- and do not offer space -- also are common. Once viable, businesses will usually "graduate," moving out into the world.

The business incubator concept is credited to Joseph Mancuso. In the mid-1950s, he was in charge of filling a large complex in Batavia, a small upstate city, but had trouble finding a tenant. So he divided it into small parcels for different businesses that shared office costs. He also provided business advice and helped raise money for them.

One of his original tenants was a chicken company. "In a joking way, because of all the chickens, we started calling it 'the incubator,'" the National Business Incubation Association quoted Mancuso as saying.

Chicken jokes aside, the idea offers special appeal now when so many large, established companies are failing.

"We need to help little saplings grow where the oaks have fallen," said John Tepper-Marlin, a former chief economist for the city comptroller who once used an incubator to launch a company.

"Business incubation is only one aspect of a well rounded economic development policy and not necessarily even the most important one, but it is a strategic one," said David Hochman of the Business Incubator Association of New York State.

The city's and state's environmental sustainability goals have also spurred the push for incubators and led to the creation of the City University's new Sustainable Business and Technology Incubator. "The challenge is now to implement the visions, the policies and the plans into American society," said Tria Case, who is leading the incubator team.

This isn't the first time the Bloomberg administration has looked to incubators to generate new jobs. In 2007, the city offered low cost land, subsidies for infrastructure construction and tax abatements to the developer of the East River Science Park so it could keep its rent low for biotech start ups.

Some have criticized the mayor's current approach to helping the Wall Street set as one that unfairly benefits those who may already have the funds to start their own businesses and who helped create the current financial mess.

"What about the countless small businessmen and women ... who were running second- and third-generation shops," an incredulous Jeremiah Moss asked on his blog. "They weren't paying down million-dollar mortgages on luxury condos, ordering bottle service, and running up tabs at Bergdorf's -- they were supporting their families and paying the rent."

The Industry City Art Project, for example, is an art incubator in an industrial complex that seeks to shield artists from commercial pressures. "We want to offer artists low-cost space so that financial pressures don't influence their production, which is particularly important for artists whose work may not be commercially viable," said Lise Soskolne, who works for Industry City's landlord in Sunset Park. The landlord funds the project.

One of the oldest incubators in the city assists only non-profit businesses. The Incubator/Partner Project Program at the Fund for the City of New York -- entirely funded with private money -- currently houses 25 small non-profits. Program enrollees receive financial, technical, managerial and legal assistance. Some never leave the program and instead become partners with the fund. "We choose projects based on our belief that they will create value for the city," said Jill Schumacher, the program coordinator.

The Food Bank, a non-profit that got its start at the fund, now distributes 200,000 meals a day to hungry New Yorkers. "The Fund for the City of New York was pivotal in helping to raise money, find space, develop a network for food distribution and assume back office operations," Lucy Cabrera, the Food Bank's president, said in a statement.

Many incubators aim to jump start businesses with social aims.

New York Women Social Entrepreneurs' incubator program pushes to get female social entrepreneurs up and running. Founded in January, it will provide a support team of apprentices and mentors to six women with businesses that have a mission to address a social need in the community. One of its partners is Baruch College's Zicklin Business School.

Green Spaces offers help for green businesses in its Downtown Brooklyn incubator. The project offers affordable office space and services, access to interns, and provides networking opportunities and workshops for small start up companies with staffs of one to five people. Existing small companies that would like to become environmentally friendly also can receive benefits and assistance. Green Spaces, which gets some funding from its building's owner, has only been open for about eight months but already houses 15 businesses.

There is no hard data on the impact of incubators in New York City, but David Lewis, an assistant professor at the University of Albany, has studied the economic impact of incubators and found positive results. His research shows that nationally, 84 percent of "graduates" stay local once they outgrow an incubator's services. He points to another report from 1998 that studied six technology incubators in New Jersey and found each job created cost only $3,000.

The Virtual Incubation Program at the Industrial + Technology Assistance Corp. generated at least $34.3 million in economic impact within the five boroughs between 2002 and 2008, according to its spokesperson.

And a recent federal report also found incubators to be especially effective. "Investments in business incubators generate significantly greater impacts in the communities in which they are made than do other project types," the Economic Development Administration concluded.

Although they praise the positive impacts of incubators, advocates stress that they are only as successful as their management. To get the most bang for its buck, Lewis says business incubators should conduct feasibility studies before starting their programs, establish client entry and exit criteria, collect outcome data and provide networking opportunities between client firms.

Large incubators are best able to offer synergy among their clients, Tepper-Marlin, the former comptroller economist, noted. He also emphasized the importance of being located near universities. "You need the three-way mix of government support, deep knowledge and entrepreneurial skills," he said.

Government support for incubators should be "offered competitively, with incentives for best practices and accountability," said Hochman of the state incubator association. It should also be programmatic, covering all aspects of an incubator's programming, he adds. As a model, Hochman points to the New York State Energy Research and Development Authority's early stage renewable and clean energy technology program, which offers grants to incubators supporting clean energy companies.