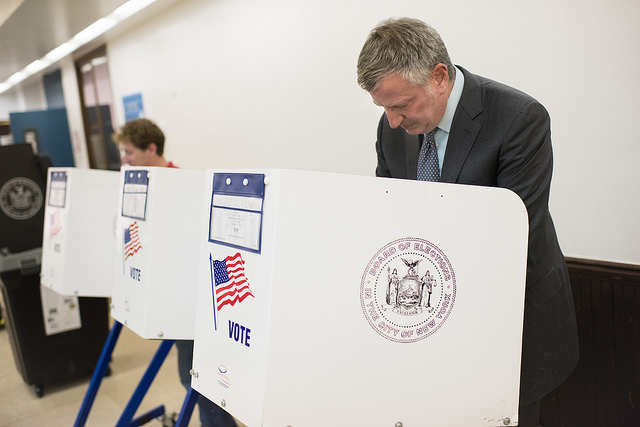 The 2017 New York City elections are for the three citywide posts of Mayor, Public Advocate and Comptroller; the five Borough President positions; all 51 City Council seats; the Brooklyn and Manhattan District Attorney posts; and other down ballot offices like some civil court judges and some district leader positions.

The party primaries were September 12. The general election is November 7.

At Gotham Gazette, we are providing a vast amount of information about the elections, and we've also teamed up with WNYC radio and City Limits to provide even more, including reporting on contentious races, a weekly podcast, and a comprehensive, interactive voters guide [the 2017 primary election voters guide was here].

We have a list of candidates running in races for the citywide and borough president positions, the two DA races, and all the City Council races. We also briefly discussed each of 20 Races to Watch here, mostly focused on the competitive Democratic primaries. As we move forward in the general election, we will continue to keep tabs on competitive and interesting races.

Below, you'll find all of the 2017 election coverage from Gotham Gazette, along with key additions from coverage by City Limits and WNYC radio, including some crossoever and collaboration among the three outlets, and also videos of debates for Manhattan City Council districts and the Democratic mayoral primary aired by Manhattan Neighborhood Network. [Start here: Voters Guide for the 2017 New York City General Election]

Many Election Poll Workers are Placed by Party Machines, Some May Influence Votes

Mapping the Mayoral: Where De Blasio and Malliotakis Each Did Well

As New York Votes, a Push to Allow 17-Year-Olds the Ballot Next

Max & Murphy Podcast: 10 Things to Think About on Election Day

Following Up with Comptroller Stringer on Several Debate Moments

Yes or No? Three Questions on the Back of Your November Ballot

Who will be at the second mayoral debate?

5 Things to Watch at The First General Election Mayoral Debate

You Can Help Boost Voter Turnout on Election Day, But You Have to Register Soon

23 Things Bo Dietl Promises To Do As Mayor

10 Races & More to Watch in the General Election

A Smattering of Independent Expenditures in City Election Cycle

The Mayoral Money Race as the General Election Heats Up

'Tears of Joy,' Hope for a District in Alicka Samuel's Win

On the Lower East Side, Carlina Rivera Dominates Primary Day

In Surprise to Some, Diana Ayala Appears On Verge of Victory

Max & Murphy Podcast: What Happened on Primary Day & What It Means

25 Things Nicole Malliotakis Promises To Do As Mayor

Can Anyone Defeat Eric Gonzalez for Brooklyn DA?

Candidate Endorsements in the 2017 City Elections

Malliotakis Bets on Fundraising Blitz To Be Competitive with De Blasio

Inside the Numbers: Mayoral Campaign Spending

Five Democrats Will Be On The Mayoral Ballot, But Only Two Will Debate

On the Lower East Side, Council Contenders Seek to Upend Favorite for Open Seat (Council District 2)

There Will Be Three Big Questions on Your Ballot in November

Democratic Challengers Fire Away at De Blasio. Is Anybody Listening?

With Subways in Crisis, It’s Showtime for Mayoral Candidates

Massey Makes A Campaign Stop on the Upper East Side

Candidates for Brooklyn District Attorney Seek to Set Themselves Apart

The Issues Likely to Dominate The 2017 Mayoral Race

Candidates Want Your Vote. They Need Your Signature First

The May Money Race in 'Open' City Council Seats

GOP Mayoral Primary Appears To Be Massey Versus Malliotakis

The May Mayoral Money Race

Malliotakis Falsely Claims '100% of the Vote' in Last Election