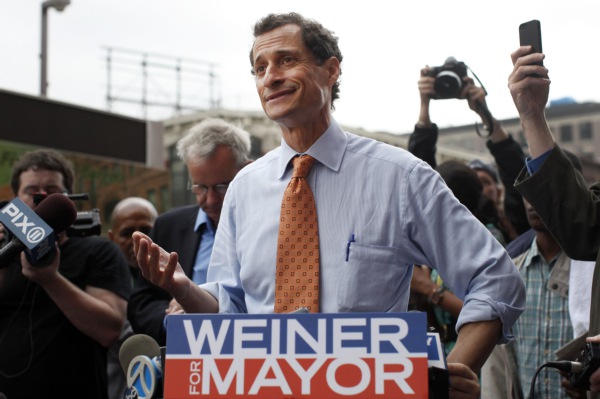 NEW YORK — Anthony Weiner may consider himself the underdog in this year's mayoral race. But his strong poll numbers from the outset of his late entry belie that idea.

Despite the sexting scandal that led him to resign from Congress two years ago, Weiner remains a credible Democratic mayoral candidate. The self-styled policy wonk has said his focus on ideas for making life better for the middle class will take him all the way to Gracie Mansion.

Those ideas were largely outlined in a policy briefing, called “Keys to the City,” which he released even before entering the mayoral race. While the booklet draws from a handful of concepts he floated the last time he considered a run for City Hall back in 2005, there are a number of new ones (e.g., Kindles for every New York City school child). In our recent exclusive interview with the candidate, Weiner elaborated on his policy ideas and answered questions about public safety, the city budget and more.

GOTHAM GAZETTE: The first chapter in your "Keys to the City" is on education. After three terms of a mayor who did a lot to boost the Department of Education by bridging it with the private sector, is that relationship something you'd keep?

ANTHONY WEINER: Well, there have been a lot of instances where the mayor's business background has been an obstacle to him understanding some of the elements of government and education. There have been clearly some example where his relationship with other rich people and the corporate world has been a great benefit to New York City, and one of them is the way he's been able to persuade some of these business and individuals to get involved.

I hope to continue that kind of thing. I need to bring resources — whether they be from Washington, Albany or from individuals who just care about the future of New York City.

Now you can quibble or disagree about where he chose to focus, but I don't think that should diminish the appreciation New Yorkers should have — that he's devoted a lot of energy to trying to get private sector investment in New York City on a lot of levels.

GG: One of the things that your policy book makes a point of is your strong advocacy of school choice and changing how the city might work with teachers going forward — one of the points in the book is reformulating how we do teacher contracts. With the next mayor likely to be the one to deal with contract negotiations, how do you think those ideas will play?

AW: I'm not going to litigate some of the terms you've used. You know, a strong advocate for school choice — that means I'm a strong advocate of charters. That's not really the case. I'm kind of agnostic. I want to figure out whatever works. But I don't think I'm someone who goes out an campaigns on the idea of charters. I'm just not ideologically opposed to them.

And in terms of the ideas that I've talked about — returning a sense of discipline to the classrooms, and trying to give teachers more mobility and trying to give me as the the mayor, hopefully, more flexibility on where I send teachers. I think these are things that most teachers want. I think most teachers by and large want to have raises, they want to have health care that's affordable. They also want to be rewarded for the work that they do.

So I don't think I'm going to have any more difficulty than any other executive has in negotiating contracts with their workers … I'd like to be able to afford to give raises, but I can't do it unless I fix health care. That's not a confrontational concept; those are the facts, and I think most union members and the leadership understand the facts.

GG: One of Mayor Bloomberg's legacies will be reconstruction post-Superstorm Sandy and the resiliency plan, and he's been a strong defender of the city's right to redevelop on its waterfronts.

AW: Retreat really isn't an option. Our waterfront is not only valuable real estate, but it's people's home. Simply saying that we're going to have wholesale rezoning that is going to limit development in places we already have — that doesn't mean we've made smart decisions up to now — but I think the mayor has set us on a good path to at least give this a good deal of thought.

There are things that I think we need to perhaps do differently. In fairness, it's not going to be him doing it. It's going to be the next two or three mayors probably. But he's absolutely right to call attention to the idea that we can't keep doing things the way we did them in the 1930s and 1940s.

GG: You've recently suggested that the state of ethics in Albany makes the case for New York to take back some its control of a realm of issues. But the city's been dealing with its own share corruption investigations. Do you think the city's Department of Investigation has enough teeth to handle the spate of scandals?

AW: Let me just make one thing clear: my declaration of independence from Albany didn't have a lot to do with scandal. It was more about the dysfunctional nature of the government there and the relatively good functioning government that we have here.

All that being said, I think the Department of Investigations — I think the tools are available to a mayor to weed out corruption in his administration. We've had a lot of conversation about challenges facing the police department: the criminal justice coordinator, the CCRB, the Corporation Counsel. There's all kinds of legal remedies if you're serious about weeding out corruption.

I think when you have a city bureaucracy as large as the one we have, you have to assume there will be some bad apples in the bunch, and the real challenge for any mayor is how swiftly those things are dealt with. I hope to run an administration where we never have any investigations by DOI, but I'm going to put someone there who's independent, who's given a broad and clear mandate to weed out trouble wherever they find it. And I'm going to back them up on it. It's not going to be a second-tier appointment for me.

GG: Pending any litigation or an actual mayoral veto, the NYPD inspector general bill leaves it up to the mayor to appoint the IG.

AW: Well, I don't support the legislation, but I believe in following the law. And if this is created by the Legislature, I will fill it. But I also don't believe it will be necessary in my administration.

GG: Would that be one of the second-tier appointments?

AW: There aren't going to be second-tier … I guess you caught me in a rhetorical trap that I have implied that there are. No, it would not be. I'm going to have good people working for the people of the city of New York. But I will make it clear that the policies that the inspector general is intended to address, I will change without the help of any inspector general.

GG: Another issue that you bring up in the policy book is the city budget, namely making it more transparent and open to taxpayers. Some groups ask if the city's Office of Management and Budget has operated in a somewhat unaccountable way.

AW: You know, the Independent Budget Office was created because of this sense that we needed some structural alternative to OMB. Let's face it: in our charter, the single greatest power the mayor may have above all else is his ability to estimate revenues. So when you have that much power in an agency, you need to balance it with some level of transparency or at least some fulcrum on the other side.

Now, we haven't had a strong fulcrum on the other side because the Council has largely gone along with the mayor. I hope that my OMB is on the level, and that the data that they use is transparent. I hope that we have a conversation that's more honest around things like revenue from fines and levies, whether or not it's leading to summons activities just to meet the OMBs targets.

GG: What's your take on member items: keep them, reform them, do away with them?

AW: Again, there's a real transparency problem above all else. I think that member items should be administered as a process through the executive branch, because it's pretty clear the legislative branch is using them for political purposes and not necessarily the best interest of the citizens. Some of them are going towards worthy organizations, some not.

You have some vetting process of the organization as a stage one of the process. Second, something like what was done in Congress where every request that comes to a member of Congress to the speaker has to be public in some way before the budget is done. And, finally, Council members should not be allowed to fundraise from those organization once that conflict has been established. Money should not be able to come back from the people who are involved in the organizations because they got taxpayer dollars.

GG: Housing in New York City has long been one of the markers of inequality in the city. As someone who's trying to help "build the middle class," how do you make an agency like NYCHA more accountable to taxpayers and tenants?

AW: The fact that you have this trifurcated structure of federal, state and city funding coming to NYCHA, you have no true accountably, and you have very few incentives on improving what goes on in public housing.

We have to at some point have a conversation ... with the state and the feds to say that if we're able to make this more efficient, it got to benefit the residents of the project. I was the chairman of the Subcommittee on Safety in Public Housing in the late 90s, and one of the reasons I took that assignment was because no one was fighting for NYCHA residents. There wasn't much accountability. That has to obviously change. But was also have to do other things.

We have to realize that one of the reasons that we've had so much strain on public housing is that we haven't done what we needed to give people ladders of opportunity to leave public housing and to move into other programs like the Nehemiah or Mitchell-Lama program for the 21st century.

GG: So how do you balance the need for help from the other level of government with taking sovereignty on New York City issues?

AW: Well, look: what I have found — Medicaid is a good example — if you say to your partner in government, in this case the federal government, "we want to innovate, we want to come up with a plan that saves people people and gets better healthcare," by and large Washington says, "okay, we'll give you that waiver and let's see how it works."

I think the general footing is usually with governments, whether it be the state or federal government, people want the best outcomes. And it starts with having innovative ideas on how you improve outcomes. That's the first step in persuading our colleagues on other levels of government to let us take more control.