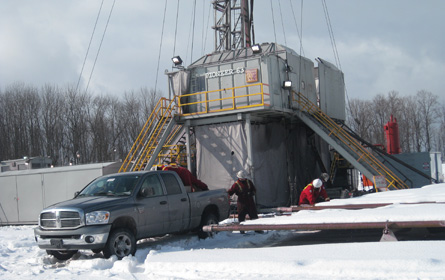 Photo by William Sweet
While New York has been considering wehteh to allow gas drilling, many sites have been developed in adjoining states, such as this one near Dimock, Penn.

(For an opposing viewpoint, see The Cuomo Administration Must Slow Down by Eric Goldstein of the Natural Resources Defense Council.)

The possible expansion of natural gas development in New York's Southern Tier has polarized New Yorkers like few issues have in recent years. On Jan. 1, Gov. Andrew Cuomo and his administration inherited the matter. Whatever they decided, they would have to deal with the issue directly, calmly and with political courage. After all, drilling opponents had already spent been two years cultivating opposition against hydraulic fracture stimulation technology.

Shortly after taking office, Cuomo appointed long-time Open Space Institute head Joe Martens as commissioner of the Department of Environmental Conservation -- a decision immediately hailed by environmental groups as a key to their defeat of expanded natural gas exploration in New York.

Oil and gas developers also wondered what the Martens appointment would mean to the industry, which employs about 4,500 people across the state. The industry watched as business and opportunity fled New York to work in the same Marcellus Shale gas field beneath Pennsylvania, West Virginia and Ohio.

Martens was previously an open critic of natural gas extraction using hydraulic fracturing. But he also has a great deal of energy policy experience and understands the relationship between energy, the environment and the economy. In fact, in his announcement of the appointment, the governor said, "Joe knows how to strike the critical balance between defending our natural resources from pollution and destruction while at the same time fostering a climate of economic renewal and growth."

It seems the commissioner is doing just that. Fast-forward nine months from his appointment and we have seen the birth of a new draft of drilling permit rules â€“ known as the Supplemental Generic Environmental Impact Statement, or SGEIS. The administration has allowed Department of Environmental Conservation experts, including geologists and engineers, to modify the statement, resulting in the most stringent set of rules in the nation, and perhaps the world. Whether they are too stringent, and therefore restrictive of business development, remains to be determined. Industry is still evaluating the 1,500-page document. The public comment period ends Dec. 12.

In total it has been three years since a previous administration enacted a de facto moratorium on natural gas extraction using horizontal drilling and hydraulic fracturing. My own employer, Norse Energy Corp., has dealt with the consequences of this delay. Four years ago Norse decided to focus our exploration efforts on shale drilling in New York and hired an expert staff of surveyors, geologists, engineers, geophysicists, technicians, accountants, land agents and even hydrologists (to assure protection of water resources) to work in western and central New York. We even had plans to double our staffing and employ more than 100 people directly with hundreds more indirect jobs. Now instead of additions we have been forced to subtract -- reducing our workforce by more than half since the beginning of the year -- because expected opportunities went unrealized.

Protesters have focused on hydraulic fracturing. The term fracking has become a rally point as if it were a new, unknown technology. In fact, hydraulic fracturing has been in commercial use for about 60 years, and it has been used to free oil and natural gas resources more than one million times in 32 states nationwide, and here in New York, too. Ironically, water well drillers often hydraulically fracture their wells to improve production.

Natural gas is part of the historical fabric of New York. In 1821, the nation's first gas well was "dug" in Fredonia, in western New York near the banks of Lake Erie. Natural gas became a commercially viable energy source shortly thereafter. Since then, 75,000 oil and gas wells have been drilled in New York.

Today, there are more than 14,000 wells that are still active and operating safely. The vast majority of these wells have been hydraulically fractured. You can drive across the Southern Tier and see the wellheads on farms, schoolyards, college campuses and church grounds. While a reclaimed Marcellus Shale well requires a larger footprint, it will not be an eyesore, especially when you consider what it will produce: jobs, tax revenue, royalty payments, energy independence and an economic boost that the Southern Tier has never seen before.

Natural gas also will be part of the nation’s energy future. A recent Massachusetts Institute of Technology study highlighted the significant role natural gas will have on the future of transportation, energy production and greenhouse gas reduction. The point here is that natural gas has been, and will remain, a positive component in our efforts to improve air quality and environmental quality in New York.

The governor and commissioner have vowed to let science rule the discussion, and so far they have done that. They both have cautioned that energy development must be deemed safe before it is allowed to expand in New York, but that the state also has energy and economic needs. New York is at a critical point as it pursues the safe development of natural gas deep underground -- ever mindful of protecting our precious natural resources closer to the surface.

The governor's administration has said balance is key. Our industry agrees.

S. Dennis Holbrook is executive vice president of Norse Energy in Buffalo and a director of the Independent Oil and Gas Association of New York.