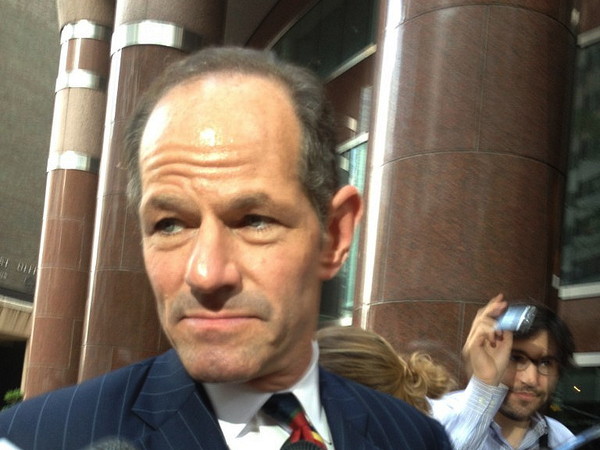 ALBANY, N.Y. — Eliot Spitzer says Wall Street doesn’t want him to be the city’s next comptroller because the Wall Street bankers and corporate titans are trembling in fear of what he might do.

Anthony Weiner says “powerful voices” don’t want him to be mayor. “But this isn’t about what they want,” he said in one of his TV ads. “They’ve gotten their way far too long.”

There may be some grain of truth to these statements, but it also begs credulity that two candidates who have huge name recognition brought about by career-derailing scandals of their own making would cast themselves as victims of unseen forces bent on breaking them before they can even get into office.

But they are not alone in asserting that shadowy groups across the city are trying to safeguard the status quo from potentially “radical” candidates — lest the system be shaken to its very core.

Mayoral candidate John Liu has called a federal investigation into his campaign fundraising a “witch hunt” and alluded to being singled out for scrutiny. And conservative mayoral candidate Erick Salgado has decried what he claims is racism by pollsters and others seeking to keep the only Latino candidate in the Democratic primary from giving voice to his community. Sal Albanese has cast himself as a political “outsider.”

How to explain this seeming paranoia as more than desperate strategy from embattled campaigns?

Doug Muzzio, professor of public affairs at Baruch College, doesn’t buy any of it. "Mysterious forces, mainly psychological urges and the rest strategic human agency,” is how Muzzio describes the challenges these candidates face.

“It is the underdog message,” says Christian Greer assistant professor of political science at Fordham University. “But the genesis is all different for each candidate.”

Greer says she refuses to put the Spitzer, Liu and Weiner in the same category because they all have committed different political sins. Spitzer broke the public’s trust five years ago, Weiner broke his wife’s trust and the public’s, while she says Liu has been accused of not being able to manage his campaign contributions.

Regardless, she says that the men’s claims that they are facing down larger opposition.

Greer says that Liu’s financial ideas are so left-leaning that he can “clearly say the establishment is against him. He can say they don’t understand his policies.” As for Weiner, Greer says, “The media loved him but now they are against him.”

And, as for Spitzer, Greer says, “he has angered all sorts of people who don't want to see him elected.”

When it comes to candidates like Sal Albanese and Salgado who claim the establishment and media are against them, Greer says they are basically right. “The media ignores you when voters ignore you,” she says. “If you are polling at two percent, there is no reason for the press to give you attention. But if you surge like De Blasio, suddenly they care.”

In some cases the enemy is given a name: Wall Street, 'the establishment' or 'powers that be.' And a good portion of the time the candidates blame the media for falling under the spell of these overwhelming and seductive forces.

Weiner has announced that he could care less that the New York Post and The Daily News says about him. “For too long they have been running this town. They are the people who brought you a third term,” Weiner said at a mayoral forum (the campaign shared the video on his website).

Of all these supposed victims of the powerful, Spitzer probably has the best case.

The former governor, whose hard-charging political career was stunted by a prostitution scandal, truly did anger many on Wall Street who swore revenge against him for what they saw as overzealous prosecution.

Langone, who asserts that that he knew of Spitzer's obsession with prostitutes because of a chance encounter in a post office, told New York Magazine in 2005: “One way or another, Spitzer is going to pay for what he’s done to me and the havoc he’s caused in the New York business climate.”

The Democratic establishment in New York — especially Gov. Andrew Cuomo — knows that it is in their best interest to see Spitzer fail. Spitzer's election will be easy fodder for New York Republicans who want to label Democrats as the party of the corrupt and the sex scandal sideshow. Spitzer’s election could hurt Democrats nationally and impact Cuomo’s ambitions to be president. It would be harder for Cuomo to run as the man who reformed the culture of corruption and scandal in New York if Spitzer wins.

Cuomo made an enemy of Spitzer during Spitzer's time as governor when Cuomo issued a damning report about Spitzer's involvement in Troopergate. It is likely that team Cuomo wants the former governor as far away from political office as possible.

“If Spitzer does get elected he will always be Gov. Spitzer,” Greer says. “It will also be a distraction for the Democratic Party.”

And then there are Spitzer's more colorful opponents: Republican operative Roger Stone who is known for the tattoo of President Richard Nixon he sports on his back, his wardrobe and his swinger lifestyle and “Manhattan Madam” Kristin Davis who claims she provided Spitzer with prostitutes. Both of them have gleefully returned to flinging vitriol at Spitzer since he announced his run.

Spitzer started the race polling in the double digits over his relatively unknown challenger Manhattan Borough President Scott Stringer but a recent Quinnipiac Poll found the race in a dead heat. "The entire political and media world has jumped on Manhattan Borough President Scott Stringer's bandwagon,” said Maurice Carroll of Quinnipiac, “helping him poll-vault from 19 points down to dead even in just two weeks."

Weiner's return to the public spotlight after his resignation from Congress for his sexting scandal was facilitated by a rather glowing profile in The New York Times Magazine called "Anthony Weiner and Huma Abedin's Post-Scandal Playbook." A number of insiders saw the article as a favor from The Times to Weiner as he planned his surprise bid for mayor.

During a chat with Buzzfeed this month, Weiner told the interviewer that the Times "doesn't want me to win.”

Weiner later took an adversarial tone with Buzzfeed when he became unhappy with their line of questioning and suggested they just play videos of cats. Jonathan Van Meter, the man who wrote the Times piece on Weiner admitted that he had just "assumed" Weiner had stopped sexting and didn't ask him about it--not exactly the behavior of a journalist bent on bringing a politician down.

But Weiner does face legitimate opposition from the Democratic Party. Just as in Spitzer's case Democrats are concerned that a Weiner win, no matter how unlikely that is now, will further sully Democrats as the party of corruption and sex scandals. Mayoral candidates have begrudgingly accepted the idea that Weiner is in the race until the end because of his and his wife's political situation but they hope he remains trailing in the polls with a reduced amount of media attention.

Liu has long faced allegations that his fundraising operation took advantage of bundlers who masked donations. Two of Liu's aides were found guilty of breaking campaign finance laws in May. Earlier this month the Campaign Finance Board announced that Liu would not qualify for $3.5 million in matching funds because of allegations of irregularities in his fundraising operation. Liu held a press conference and lashed out at the "forces" that have aligned against him.

“Let’s put it this way,” Mr. Liu told supporters earlier this month. “There’s no question that there are some pretty powerful forces in this city who do not want to see me mayor.”

Liu's supporters have openly claimed that Mayor Michael Bloomberg and Council Speaker Christine Quinn are opposing him because of his far-left stances on some issues but earlier this year Liu's supporters were focused on blaming the federal government for unfairly investigating his campaign because of his ethnicity and his political beliefs.

"For some reason, and I have no idea what the reason is, they’ve been after me,” Liu said in a May interview with NY1. “An FBI undercover operation into a campaign? Does every campaign get that kind of thing to make sure everything’s kosher?”

So how likely is it that the underdog, everyone-is-against-me strategy will work? “The most recent person to use it is Sarah Palin,” said Greer. “Voters actually want to see you have a strategy. They want to move forward at some point and if the politician can’t, they will.”