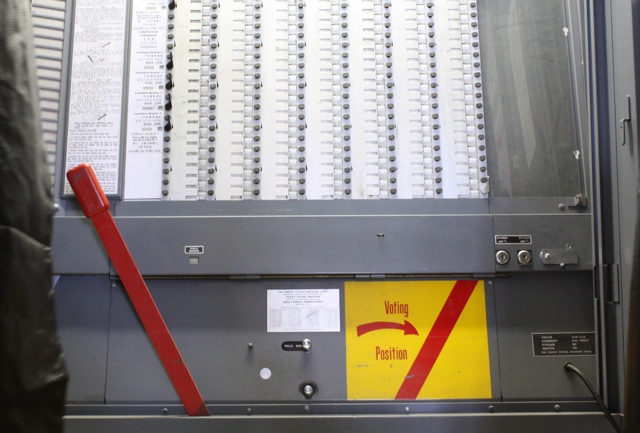 The shock and awe of the 2013 New York City primary election is coming to an end. Say goodbye to surprise scandal-scarred candidates, celebrity endorsements, embarassing gaffes, deranged press people and more candidates than you can count airing pick-me commercials on your favorite television shows — this is the end, for the moment.

But, first, a trip back in time courtesy of the city's Board of Elections — a trip back to a time when voting meant pulling a big lever. The city has packed away its multi-million dollar ballot optical scanning machines and replaced them with some 5,000 or so antiquated lever voting machines that had been in storage in Brooklyn. Elections official say the newer, electronic ones cannot be recalibrated in time for a possible run-off election.

So what do you need to know what it comes time to get into the booth? For one, there are no sample ballots this year because of the use of lever machines. You will have to be ready to analyze your ballot, make sure you click one candidate in each category and — only when you are sure you have voted properly in each race you wish to vote in — pull the lever. Here are the official instructions from the BOE:

1. Pull the RED VOTING HANDLE from the LEFT to the RIGHT. Do not move it again until after you have completed your selections.
2. Make your selections by flipping the lever so that you can see the ⌧ next to the candidate’s name.
3. Once you have made all your choices, cast your vote by pulling the RED HANDLE from RIGHT to LEFT.

But it might not be that easy. Good government groups worry that the old machines acquired in the 1960s could break down. According to The New York Public Interest Research Group, 40 percent of poll workers haven't been trained in how to use them.

Think that this is a particulary akward situation for the greatest city in the world to be in before it elects its first new mayor in 12 years? Well, so do most people. As a result, the state Legislature passed legislation this spring to allow the city to return to lever machines for the primary and runoff elections. Gov. Andrew Cuomo signed the bill and here we are.

Get some good practice in at the polls tomorrow as the the lever machines will be back again for the Oct. 1 runoff, if there is one. The Board will daringly return to the electronic ballot scanners used in previous elections for the Nov. 5 general election.

If you experience any problems or irregularities in the voting booth or at your polling site (broken machines, missing registration records, etc.), the New York Public Interest Research Group and Common Cause will be running a nonpartisan voter helpline on Election Day. You can reach them at 212-822-0282.