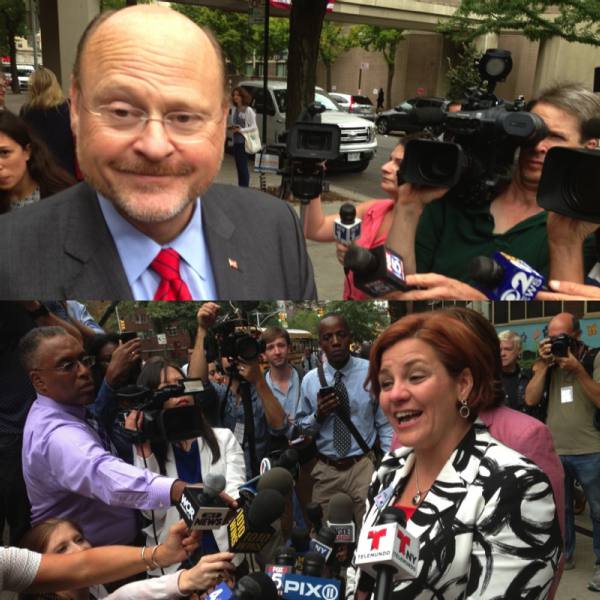 NEW YORK — One loud crank of a handle. Multiple flips of little levers. And then another loud crank.

These were among the defining sounds of primary day on Tuesday as voters across the five boroughs cast their ballots on old lever voting machines for an election that will signal a shift in power at City Hall.

The machines proved to be the dramatic device in the day’s narrative, creating conflict as they broke down or led to delays at the polls. Candidates themselves also noted the decidedly retro experience.

Around 7:15 a.m., Democratic mayoral candidate and presumed frontrunner Bill de Blasio emerged from a voting booth in the Park Slope, Brooklyn, the neighborhood where he lives, scrunching up his tall frame to get out and pulling aside the curtains.

“My technique is still good,” he said, moments later amidst a crush of reporters and joined by his wife Chirlane McCray.

A few hours later, Council Speaker Christine Quinn walked out of a Chelsea school with wife Kim Catullo. After showing up five times on the ballot for City Council, Quinn said she was excited about seeing her name in the mayoral category.

And it was all punctuated by the return of the city’s old lever machines.

“Brings back memories — that clunk noise, you know what I mean?” Quinn said as she walked out. “Makes you feel a sense of completion.”

But at least one candidate was cheated that experience. Former Metropolitan Transportation Authority chief Joe Lhota had to vote by paper ballot at the Brooklyn Heights synagogue that served as his polling site.

“The machines weren’t working,” Lhota said, joined by his wife and daughter at his poll site. “I’m glad I voted. I just want to make sure we all get our votes counted.”

The lever machines have been a large sticking point this year. Making their grand re-entrance after the city Board of Elections announced it wouldn’t be able to use the recently adopted optical scanning system.

In July, Albany passed a law allowing New York to pull the lever machines out of storage. Done as a means to quash fears that it wouldn’t have primary results in enough time to prepare for an expected runoff, the plan was met with criticism from good government groups that pushed for the city to adopt the same electronic counting system it couldn’t use.

Less than an hour into the primary, complaints began to flood into the 311 and Board of Elections Twitter account about the old lever voting machines. And by about noon, the New York Public Interest Research Group and Common Cause NY reported that it had received 76 election-related complaints by noon, half of which reported broken machines.

Of them, 18 complaints were in Brooklyn, 10 in Manhattan, seven in Queens, three in the Bronx and one in Staten Island. Those voters who couldn’t use the machines were given the same option Lhota was given: vote by emergency paper ballot.

“We have a few little hiccups and speed bumps as you can expect,” said BOE Executive Director Michael Ryan earlier this morning. “We have over 1,300 poll sites and 5,132 machines that had to be delivered. But who’s counting?”

Ryan reminded reporters that the machines would only be used in the primary and expected runoff for mayor and public advocate. Come November’s general election, voters will once again use the optical scanning system.

“We’ve used the lever machines for many years in the city of New York,” Ryan added. “It’s like visiting an old friend.”

And yet some observers were less than thrilled about reconnecting with the past from the start.

“It was a case of ‘I told you so,’” wrote Gene Russianoff of NYPIRG in a statement today. “Many had warned against using the breakdown-prone 50-plus-year-old lever voting machines – even temporarily.”

Besides the added wrinkle of the lever machines, community groups from around the city are just as troubled with some of the more persistent issues at voting locations. Glenn Magpantay of the Asian American Legal Defense and Education Fund, said that P.S. 131 in Jamaica, Queens was outfitted with two machines, both of which were broken.

He said poll workers told AALDEF that 300 people couldn’t vote from about 6:15 a.m. until 1:34 p.m., when a technician finally arrived to fix the machines.

“We're getting a number of complaints about broken voting machines,” he said.

But there were other problems, Magpantay said.

In election districts with large Bengali- and Hindi-speaking populations, he said AALDEF monitors had come across no Bengali language ballots, in spite of a federal mandate that the BOE have them available. Magpantay also said that at one location, there were no interpreters on site.

The Board of Elections could not immediately confirm the issues in Queens, but spokeswoman Valerie Vasquez said that they were deploying extra emergency ballots to any location that requested them.

Unlike affidavit or absentee ballots, emergency ballot are counted the night of the election. It’s unclear if and how the demand for extra emergency ballots will affect accurate reporting of tonight's preliminary results.

Concerns about language access were also raised in Washington Heights, a heavily Spanish-speaking neighborhood. State Sen. Adriano Espaillat’s office complained that the polling site at the Highbridge Recreation Center had no Spanish-speaking BOE employees, a charge that Espaillat brought up last summer when he ran for Congress.

Similar complaints of a lack of language access came in from nearby P.S. 28, where a site with as many a 12 election districts only had two Spanish-speaking workers on hand. Meanwhile, a third site at Isabella Geriatric Center reportedly had enough translators for voters in need.

“New Yorkers are about to elect their first new mayor in over a decade, and the Latino community deserves the chance to make its voice heard,” Espaillat wrote in a statement. “But poll site changes and the insufficient number of Spanish-speaking BoE workers in Upper Manhattan is making it more difficult for our constituents to cast their vote.”

Espaillat vowed to do what he could to help the BoE address his constituents’ needs before the expected evening rush.

New York primary voters have until 9 p.m. to cast their ballots.