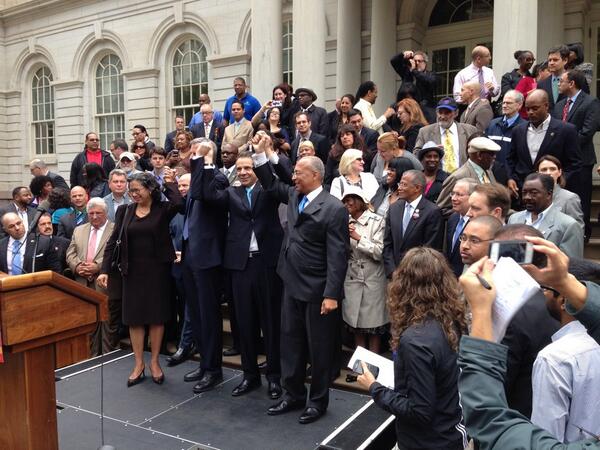 "Does Cuomo make a call to Thompson and suggest he backs off to protect de Blasio?" asked Doug Muzzio, Baruch professor of political science, on Wednesday morning as Bill de Blasio celebrated his first-place finish in the Democratic mayoral primary while Bill Thompson's campaign struggled to deal with the fact that he couldn't be sure whether de Blasio had netted the 40 percent of the vote he needed to avoid a runoff.

Today we might have an answer of sorts to Muzzio's question. Although we don't know the dealings behind it--Thompson, de Blasio and Cuomo all gathered at the steps of city hall today. Thompson conceded, de Blasio thanked him, introduced Cuomo and Cuomo endorsed de Blasio. "Bill is going to lead this city in the great, progressive Democratic traditions," Cuomo said of his long-time friend. Cuomo told reporters Thompson's decision to concede the race was his own.

It seemed otherworldy for one reason--Cuomo has avoided the mayoral race all year. Cuomo was loathe to discuss Anthony Weiner, Eliot Spitzer's bid for comptroller or to get involved in the policy sparring that took place.

It wasn't until Mayor Michael Bloomberg was quoted in New York Magazine calling de Basio's campaign racist that Cuomo actually uttered a mayoral candidate's name in regard to the race. "The comments that were reported clearly are out of line and have no place in our political discourse," Cuomo said earlier this month. "There's plenty of substantive issues to be discussing without raising unnecessary and inflammatory topics." Cuomo went on to praise de Blasio's family. "They are a beautiful family individually, each of the members of the family are truly special people, and I think he should be very proud of his family," said Cuomo.

So what does Thompson's concession and Cuomo's endorsement mean for de Blasio? It will save him weeks of mudslinging with Thompson, a united Democratic Party and the ability to focus on fundraising and stumping against Lhota. Cuomo's endorsement could actually be the more important of the two things when it comes time for the general election. Cuomo has touted conservative fiscal values while pushing liberal social issues and he polls very well with city residents.

Having Cuomo's seal of approval will likely help de Blasio reposition himself as a moderate going into his contest with Joe Lhota who is already painting de Blasio as extremely left leaning and someone who will undermine the city's gains under Bloomberg. "I hear an awful lot coming from the other side about the ‘tale of two cities’ and how they want to tear down the progress that's happened over the last twenty years,” Lhota said during his primary-night speech. “This ‘tale’ is nothing more than class warfare. An attempt to divide the city.”