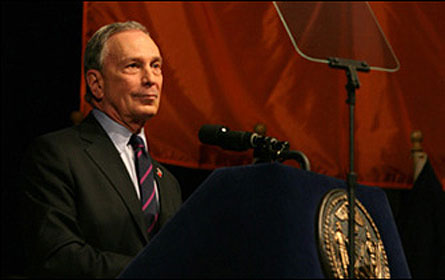 Photo provided by the Office of the Mayor

In yesterday’s State of the City speech, the Mayor rehashed a decade of education reform in the city’s schools and outlined the tough tactics he has planned to tackle failing schools and the teacher's unions, too.

In his eleventh and penultimate State of the City address, Mayor Michael Bloomberg proposed a new merit-pay system, more small and charter schools, and huge faculty replacements in failing schools. The mayor proposed giving teachers ranked “highly effective” for two consecutive years a $20,000 raise per year and helping top-tier recent grads teaching in city schools pay off up to $25,000 of their loans. "Their excellence deserves to be rewarded and compensated," he said.

These pay hikes and loan help would likely come at high price to teachers and their unions: an implementation of teacher evaluation and ranking, which essentially ties teacher’s jobs to the test scores of their students. Teachers advocates and education experts say these tests are faulty meters of a teacher’s ability and unions have long fought to keep evaluations from determining jobs.

The push for teacher evaluations and small schools are straight out the Gates Foundation’s education reform playbook, which has had enormous influence in New York schools.

United Federation of Teachers President Michael Mulgrew said that the Mayor was “lost in his own fantasy world of education, the one where reality doesn’t apply,” and challenged the mayor’s ability implement these initiatives without the approval of UFT.

Bloomberg pushed for teacher evaluations by principals, which is how tenure is currently decided. He blamed the teacher's union for losing city schools state funding, too, as they pushed through provisions to protect teachers from evaluations in certain low-performing schools. These protective efforts, he said, would also risk the state’s 700 million in federal grants as part of the Race to the Top program, he said.

In order to receive that funding, the state had to mandate teacher evaluations by law, but the unions in ten New York state districts, including New York City's, still haven't agreed to the deal.

The â€Turnaround’ and Union Fight

In his sharpest attack on the union, the Mayor said that he can and will bypass the unions implementing evaluations in certain low-performing schools and replacing up to 50 percent of the faculty. This 'turnaround' program would allow school-based committees to evaluate teachers on merit, he said, and it is already approved by Federal and State law and is consistent with current union contracts. “We’re not going to wait around while ineffective teachers remain in those schools,” he said.

But in a statement, Mulgrew disagreed: “As far as the 'turnaround' model goes, the Mayor knows perfectly well that under state law these kinds of initiatives have to be negotiated with the union.”

Public Advocate Bill de Blasio criticized the mayor for his “divisive” strategies and push against the unions. “A war on teachers will not help educate our kids,” he said in a statement.

“If the last nine years have shown us anything, it's that Mayor Bloomberg can't improve City schools by himself. The Lone Ranger approach to education has held us back,” he said. “Mayor Bloomberg also needs input from parents, teachers and principals, advocates and business leaders. This speech did nothing to forge those partnerships.”

The mayor also has plans to phase out 25 large schools and open up 100 new schools — including 50 new charter schools — in the city.

25 more large schools are being phased out and replaced with smaller schools in the same spaces. 100 new schools are in the works for the next two years — including 50 new charter schools.

Minimum, But Not "Living" Wage

The Mayor threw his support behind State Assembly Speaker Sheldon Silver's work to raise the minimum wage. Silver hasn’t introduced the legislation, but is expected to call for a minimum wage of at least $8.25. “Setting the minimum wage is also a balancing act — setting it high enough so people can get by on it without having a negative economic impact," Bloomberg said. "Right now, I believe we are slightly out of balance. The genius of the free market is not always perfect."

This effort was praised by most, though critics complained that that mayor still hasn’t budged on the controversial Living Wage bill which would raise the minimum wage on city-funded projects to $10 with benefits of $11.50 an hour. Bloomberg is expected to veto the bill if it passes City Council.

In addition to a passel of efforts and new schools aimed at helping New York students get to and through college, the city will also begin pushing for the New York State DREAM Act, which allows students brought to the country illegally as children to apply for state grants and scholarships to attend university.

The mayor also talked about new efforts to create jobs, create housing, and encourage entrepreneurship and the arts. Read the Mayor’s prepared remarks below. And for a good laugh, check out the video that preceded the speech with a hilarious cameo of former mayor Ed Koch welcoming cars onto the Ed Koch Queensboro Bridge.