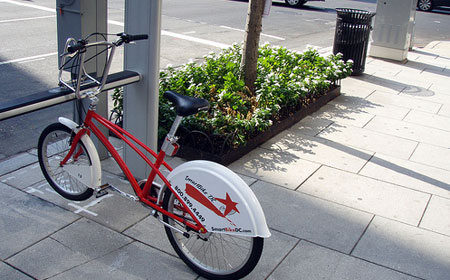 Tens of thousand of bikes could be headed to city streets, making New York City New Amsterdam all over again. That’s the message some advocates see in "Bike-Share: Opportunities in New York City," a study released yesterday by the Department of City Planning.

The report, a 142-page tome designed “to consider bike-share program models and assess their potential for New York City” reads like a step-by-step guide to implementing a bike-share program that would function as a legitimate part of the public transportation network. The report’s authors examine existing bicycle conditions in the city, estimate the number of New Yorkers who might use a bike-share system, discuss various funding models and strategies for execution, offer cost and revenue estimates, and compare and contrast all of this data with information collected by other cities that have launched bike-share programs.

It’s an impressively comprehensive report that suggests the Department of City Planning and the Bloomberg administration are seriously considering bike-share. So, how would it work? What would it look like? And can bikes really become a part of New York City’s public transit network?

Large, modern bike-share networks, like those that operate in Paris and Barcelona, consist of automated, self-service kiosks where users can pick up and return bicycles. In the most successful systems, the kiosks are distributed at a density of approximately 28 per square mile in and around city centers, often stationed near transit hubs, busy commercial areas and popular destinations.

Using a credit card or through a pre-established account, users can unlock a bike from the kiosk, ride it for however long they wish and then return it to another kiosk, at which point they will be charged for the amount of time they have had the bike. Most systems have an upfront fee (a little more than $1 for a day, less than $100 for a year) and are free for the first 30 minutes to encourage short, transit-replacing trips. After that, the bike-share programs charge around $1.50 for the first additional half-hour and a bit more (between $2 and $5) for subsequent hours. A staff of mechanics keeps the bikes and kiosks clean and in working order.

Most cities contract out their programs to street furniture companies, who run newsstands public toilets and the like. They recoup their expenses through a combination of user fess and advertising. In some cities, like Montreal, which will open its program this spring, user fees, sponsorship and government support fund bike-share programs. Because of existing street-furniture contracts and regulatory hurdles, if New York City were to implement a bike-share network, the report suggests it should start as a city-built program in areas where density and demand are highest (Manhattan south of 60th Street) and then expand to other areas (first Manhattan south of 81st Street and parts of downtown Brooklyn, then northern Manhattan, western Queens, The Bronx and central Brooklyn) using a franchise model.

Would People Really Use It?

Of course, not all New Yorkers fancy themselves cyclists and not everyone can bike, but most cities that have installed large-scale, modern bike-share programs have seen a huge surge in the number of people willing to ride, in part because bike-share negates a few of the main concerns of would-be cyclists.

The cost of becoming a bike-share member is negligible compared to the upfront expense of purchasing a bicycle. There are no maintenance expenses, no storage concerns, and the fear of theft, which according to a 1999 Department of City Planning study is the number one obstacle to would-be cyclists, is all but neutralized.

According to the report, “despite seasonal temperature changes, bike-share programs seem to be used throughout the year” and “are used by a wide variety of people of all ages. Commuters, recreational-errand riders and tourists are the three main groups. Most reports [from other cities] emphasize that most bike-share users are not competitive or recreational cyclists.”

The Nitty-Gritty for New York City

With this in mind, the study suggests that New York start a bike-share program with anywhere from 6,500 to 10,000 bicycles stationed throughout the central business district and parts of downtown Brooklyn. A rollout of that size calls for between $26 million and $40 million in capital costs. Membership and use fees would cover the $15 million to $22 million in estimated annual operating costs.

From there, ensuing phases, paid for through franchise contracts, would expand the program to between 49,000 and 60,000 bicycles, covering significant parts of four boroughs and serving two thirds of the city’s population, about 5.2 million people. Cost estimates for a program of this size, the largest in the world, are roughly $200 million in capital and $100 million in annual operating expenses, offset entirely through ad revenues and membership and use fees.

Although these costs estimates are nothing to sneeze at, they are, considering the numbers being bandied about in the MTA bailout debate, a drop in the bucket. With a mere $26 million to $40 million in initial capitol investment, the city could establish a self-sufficient bike-share system able to service tens of thousands of people each day.

That said, comparing a bike-share system to a regional transit authority is like comparing a creek to an ocean: Sure they’re both filled with water, but after that the analogy falls apart. A bike-share system, even one the size of what the Department of City Planning has suggested, is not a comprehensive public transportation system. It is, however, a very sensible part of a much larger network.

Bike-share is cost-efficient, self-sustaining, environmentally sound, healthy and has proved itself successful in cities all over the world. London -- the city most often seen as similar to, and in competition with, New York -- will launch a 6,000-bicycle program in 2010.

Although when dollars are tight and times are tough, many critics see little sense in spending money on something as out-of-the-box as bike-share, there is a strong argument that difficult moments require creative steps. Perhaps this logic, and the City Planning Department’s thorough report, will help push New York City toward bike-share.