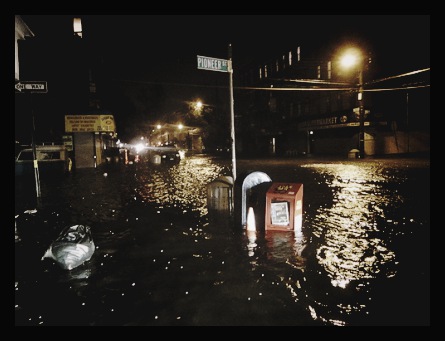 NEW YORK — On May 29,  city officials and business leaders, including a representative of Fairway Market, kicked off National Hurricane Preparedness Week in Red Hook, Brooklyn, a neighborhood that had been inundated by storm surge flooding during Hurricane Irene the previous year. The goal was to “encourage city residents to take steps to prepare for the upcoming hurricane season.”

New Yorkers were urged to determine whether they lived in an evacuation zone; make preparations in case they had to evacuate; and sign-up with the city for emergency updates via email, text or phone.

“It is important to remember even one storm can make a difference,” said Joseph R. Bruno, the commissioner of the city’s Office of Emergency Management.

Two weeks after Sandy struck, thousands of the neighborhood’s residents remained without heat and power, including at the largest public housing complex in Brooklyn. Meanwhile, many local businesses have been unable to reopen, and are suffering from cash flow problems. Even Fairway, the large market that many consider the anchor of the business community, will not re-open for several weeks after the store was flooded and much of its products had to be destroyed.

The trauma suffered by the community — particularly those in public housing — raises public policy questions about how the city should approach planning for storm-related surges. The long-term future of coastal communities will be tied to how the city reviews its approach in the wake of Sandy.

Councilwoman Sara Gonzalez, who represents the neighborhood, said in an interview last week that the impact of Sandy on the community was “horrific.”

“Could we have been better prepared? Maybe,” she said, adding that preparedness would need to be evaluated. “For future generations, we will have to have a plan that will definitely protect these areas.”

Nevertheless, she was optimistic about the future of the community. “We are going to recover,” she said, but acknowledged that it was “going to take a long time.”

The neighborhood of Red Hook, on a peninsula in southwest Brooklyn, is in what is known as Zone A — a low-lying coastal area with the highest risk of flooding during a hurricane-strength storm. The neighborhood, a mix of working waterfront, industrial sites, public housing and new developments, including IKEA, cannot be directly accessed by subway.

For instance, a 2009 assessment conducted by the city predicted “worst-case scenario” storm surges for 15 locations using a computer model called SLOSH (Sea, Lake, and Overland Surges from Hurricanes). The city’s projection that a Category 1 storm-related surge striking Red Hook could be as high as five feet proved to be accurate.

The assessment notes that “close to two million people in 743,000 households live within a SLOSH zone and as much as 38 percent of the city’s land may experience inundation by storm surge in a coastal storm.” City policy dictates that all residents living in Zone A areas â€“those closest to the coastline- should evacuate during a category 1 hurricane.

But beyond evacuation, were New York City’s coastal communities adequately prepared for Sandy? And if these areas will be subject to a growing likelihood of catastrophic storm surges, where does responsibility lie for protecting residents and businesses who may be in harm’s way? The city’s planning gap may be most evident in what befell tens of thousands of public housing residents in developments like Red Hook Houses.

Craig Hammerman, district manager for Community Board 6, which includes Red Hook, said that “clearly the [New York City] Housing Authority was completely unprepared — there is no communication.” Hammerman said it was his understanding that “there were no back-up generators” at Red Hook Houses. “The existing electrical and mechanical systems are below ground, he said. “Until the ground dries out, unless the equipment has been dried and tested, Con-Ed can't re-energize them,” he said.

NYCHA confirmed Friday that 3,600 Red Hook Houses residents remained without power, and over 4,000 residents have no heat and hot water. The agency did not respond to questions regarding its preparations for storm surges or climate change.

NYCHA Chairman John Rhea said in a November 8 interview with NY1 that the agency took “tremendous precautions and steps to prepare.” But, he added, “The storm turned out to be much more severe than anyone anticipated.”

Rhea said that with the assistance of the Army Corps of Engineers, FEMA, Con Ed and private contractors, temporary boilers and generators were being made available. He said that the location of a number of NYCHA developments in coastal areas is a longer-term challenge.

Power outages have affected other sections of Red Hook. Hammerman said that an example of a lesson that has been learned is that the neighborhood’s street lights  —which are critical to public safety — should be on a different electric feed than that of houses and businesses. He said the Department of Transportation and Consolidated Edison would have to coordinate on that.

Hammerman acknowledged the complexity of planning for the myriad of impacts of a storm surge on one community. “You can sort of break it down agency by agency,” he said. “Overall coordinating? That would have to be handled by the administration directly.” But he said if they don’t learn from the impact of Sandy quickly, “We don’t want to be back in the same situation.”

The mayor’s office didn’t respond to a series of questions about preparations for the storm or how the city was responding to the effects of climate change in low-lying neighborhoods like Red Hook.

But William Solecki, director of the CUNY Institute for Sustainable Cities and co-chair of the city’s advisory Panel on Climate Change, said that emergency planning steps taken by the city during the storm — such as closing the subways well in advance of Sandy’s landfall — “saved lives.” He called the evacuation planning “very aggressive.”

But he acknowledged that there was an “interesting tension” in New York City because of how its coastline has been developed. Solecki said that in states like Florida, where “coastal communities have much more of an experience with these sorts of threats, the burden (of storm preparedness and recovery) falls on private property owners and insurance companies.”

“The city is eking its way out — it will take a while before there can be a full assessment and evaluation,” he said. Nevertheless, he said the storm marks a moment when public policy will need to evolve. “The environmental baseline of the world in which we live is changing,” he said.

The overall coordinating agency for the city’s response to climate change is the Mayor’s Office of Long-Term Planning and Sustainability. Two semi-autonomous advisory bodies are working with the administration to plan for future impact: the Climate Change Task Force, created in 2008, comprised of representatives from government agencies and the private sector; and the Climate Change Panel on which Solecki sits, made up of experts from academic institutions and the legal, engineering and insurance industries.

The advisory groups were charged with producing a plan to adapt and secure roads, bridges and tunnels; the mass transit network; water and sewer systems; electric, gas, and steam production and distribution systems; telecommunication networks; and other critical infrastructure from the effects of climate change.

In a news release announcing the creation of the panel and task force, Mayor Bloomberg noted: “We have to adapt to the environmental changes that are already beginning to take place. For example, we can raise critical infrastructure, like back-up generators, to higher ground in areas prone to flooding.”

Red Hook provides a real world window into the vulnerability of coastal residents, and the urgency of planning for future storms. Residents and workers described five feet of water — above ground level — that poured into the neighborhood. The water, said New York Water Taxi employee and neighborhood resident James Caldwell “went to the Brooklyn Battery Tunnel intakes and all the way to the Gowanus.”

Local residents and volunteers from across the city have stepped in to clean up the debris and care for the neighborhood’s most vulnerable, while the struggle to restore power continues.

Business owners along the Red Hook waterfront are trying to re-open, though many still lacked power last week and others lost machinery and inventory to the flooding. The halt in business has already led to cash flow problems. Jackie Summers, owner of Jack from Brooklyn, a local distillery that was flooded by Sandy, said “no one has flood insurance,” a point echoed by several small business owners.

A number of businesses on the waterfront said they had been referred to the federal Small Business Administration to apply for low-interest loans after they initially went to FEMA for assistance.

But Emrys Berkower, co-owner of Token, which designs and manufacturers high-end furniture, said he “can’t foresee borrowing too much more money.”

“We’re not able to complete orders,” he said. “Everything was destroyed, [including] tools â€¦ It’s like starting over from scratch.”

Almost as soon as the flood waters receded, volunteer work crews organized by the Red Hook Initiative, which describes itself as a “local youth empowerment non-profit,” moved in to assist local businesses with clean-up.

“They did a great job — without them, we’d be swimming in mud,” said David Banner, owner of Constructive Display, which designs and builds displays for events.

Bolstered by an influx of Occupy Sandy members, the Red Hook Initiative has also taken on the job of providing food, blankets and medical care to residents of the Red Hook Houses who do not have power or heat. According to Red Hook Initiative spokeswoman Jade Elias, approximately 180 elderly and homebound residents have been a focus of relief efforts. The Initiative also serves daily hot lunches and dinners for two to three-hundred residents at Calvary Baptist Church.

“People are just frustrated,” she said. “(There is) a real feeling of desperation that is underlying everything we do.” Temperatures dipped below freezing on Wednesday night. One Red Hook Houses resident said that neighbors had begun to use their stoves for heat.

Volunteers from two Red Cross trucks on Columbia Street said that together they provided almost 500 meals in a span of two hours to Red Hook Houses residents on Wednesday.

Verna Williams, one of the 3,200 residents of Red Hook Houses West, said her half of the complex has been without power, heat and hot water since the night of October 29th. Williams said she had been told by workers from Consolidated Edison that flooding in the complex’s basements had compromised the electrical system.

NYCHA employees at the Red Hook Houses management office would not comment. The agency said on Friday that 87 percent of NYCHA residents across the city who lost power have it back.

In spite of the great difficulties, Williams said, “Red Hook has come together.”

But the historic neighborhood’s future remains in question if the probability of devastating storm surges increases. Sherman Ewing, whose house withstood 10 feet of water in the basement and lost power for almost two weeks, pointed out that, “there is no winning â€“ no beating an ocean coming up your street.”

For Summers, there is only one way to look at what happened in Red Hook. “This is what climate change looks like,” he said.