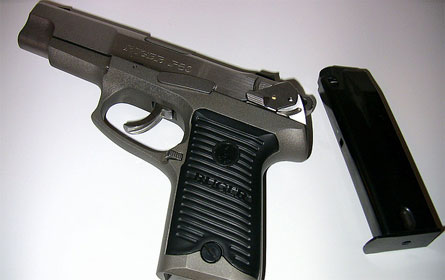 In 2002, the Bureau of Alcohol, Tobacco, Firearms and Explosives released a list of the 10 guns most commonly recovered from crime scenes across the country. At the top of the list: the Smith & Wesson .38-caliber revolver and the Ruger .9mm semiautomatic pistol.

Almost ten years later, NYPD Officer Peter Figoski was shot and killed while responding to an early morning Brooklyn home invasion. When Figoski's fellow officers arrived on the scene, they found two guns: a Smith and Wesson .38 and a Ruger 9mm.

The December shooting, the first in which an NYPD officer was killed in the line of duty in more than four years, once again puts the spotlight on two types of handguns that appear to not only be commonly accessible despite strict gun laws, but also the weapons of choice for many of the city's bad guys.

In a statement to the press shortly after the shooting, Mayor Bloomberg praised Officer Figoski and the entire NYPD for their efforts in helping to drastically reduce crime throughout the city in recent years. He also chided federal officials for failing to crackdown on the illegal gun trade.

"[A]s we look at what’s gotten better in New York City over the decades, there’s one thing unfortunately that hasn’t changed â€“ hasn’t changed at all in Washington â€“ our nation’s threat from the weapons that end up as illegal guns on the streets of our communities," the Mayor said.

Lamont Pride, a 27-year-old already wanted in connection with a shooting in North Carolina, fatally shot Officer Figoski with the Ruger .9mm as Pride attempted to flee a basement apartment in Brooklyn's Cypress Hills neighborhood. He stashed the gun under a car as he tried outrun Figoski's partner, Glenn Estrada. The .38, allegedly belonging to co-conspirator Kevin Santos, was later found in a microwave inside the apartment.

The Figoski murder isn't the first high profile shooting involving gunmen with these types of firearms. In 1993, Colin Ferguson opened fire with a Ruger 9mm on a crowded LIRR train, killing six passengers and wounding another 19. More recently, a gunman shot two men with a Ruger .9mm, killing one, while aboard a Q111 bus in Queens. A Smith and Wesson .38, meanwhile, was Bernhard Goetz's weapon of choice when the electronics technician turned vigilante infamously pumped rounds into four young men aboard a subway car in 1984.

Nor are these the only guns being used in shootings throughout the city. Yet, while much of the focus of the NYPD's gun buyback program (the department has recovered more than 7,000 guns since 2008, but declined to give a breakdown of the kinds of guns turned in) has been on exotic and high-powered firearms - a June event netted a Tec-9 loaded with hollow point bullets; previous buybacks have yielded AK-47 assault rifles and Uzi submachine guns - the weapons arguably doing the most damage on the street are smaller handguns like the .38 and 9mm.

In 2010, more than 75 percent of the 8,853 firearms traced after use in an NYC crime were either pistols or revolvers. Recent law enforcement statistics don't break down gun use, tracing and recovery by make and model. Four of the top five guns on the 2002 ATF list, however, were small handguns.

Many of the guns most commonly used in street crimes are what Eugene O'Donnell, a professor of law and police studies at John Jay College who previously served as both an NYPD officer and criminal prosecutor, and other cops call "Saturday night specials": small, cheap handguns that are generally easy for buyers to get their hands on. "Less sophisticated, cheap guns that are easy to use have been the coin of the realm," O'Donnell says.

But not too cheap, according to Charles Key, a gun expert who spent nearly 26 years with the Baltimore Police Department. "There is a myth about Saturday night specials. The old Saturday night special was some sort of cheap knock off, made of less than sturdy steel that you could buy on the street corner from some rat faced guy selling $2 pistols," says Key, who served as an expert witness in the civil case filed against New York City by the family of Amadou Diallo, the 23-year-old Guinean immigrant who was shot and killed by four NYPD officers in The Bronx in 1999.

"In actual point of fact, criminals don't want cheap knock offs." According to Key, there is no inherent quality - price or ease of use, for example - in Smith & Wesson and Ruger firearms that would make them more attractive to criminals than other handguns. "It really depends on the model," he says. "The easiest gun to use on the market is a double-action, semiautomatic pistol, which simply means that when you pull the trigger, the weapon fires."

The Ruger P95 model used in the Figoski shooting is a 27 oz. double action auto loading pistol - when fired, it automatically reloads and recocks itself, so that a user can fire again by simply pulling the trigger - designed to shoot .9mm caliber bullets. Ruger discontinued the P95 in 2005. The gun retails for roughly $400. Smith & Wesson currently offers more than 60 models of its .38-caliber revolvers, ranging in price from about $450 to more than $1,000. The company's Model 10 has been called " the most popular centerfire revolver of the 20th Century." Both companies declined to speak with the Gazette for this story.

These and other smaller handguns are not only attractive to criminals, but also law-abiding citizens who keep guns for self-defense. Smith & Wesson touts its Bodyguard line of firearms, which includes .38 revolver and .380 semi-automatic pistol, as accurate and easy to use as well as "lightweight, compact and concealable for personal protection."

While Key says that widespread criminal use of Smith & Wesson and Ruger handguns is likely an anomaly - there are plenty of less expensive, lightweight and relatively accurate guns on the market - their prevalence may be a simple matter of supply. Smith & Wesson made more than half of the .38s produced in the country last year, while Ruger produced the second most .9mm firearms.

In his tenure as Mayor, Bloomberg has repeatedly called for beefed up federal gun restrictions as well as further tightening of what are already some of the country's toughest gun control laws here in the city.

"It's virtually impossible to get a permit for a handgun in New York City" says criminal defense attorney Don Murray, who represents clients in criminal gun possession cases.

In addition to prohibiting persons who've been convicted of a felony from obtaining a gun license, city law also allows NYPD to deny an application by a person it deems to be lacking "good moral character" or where other "good cause" exists. Private individuals who successfully navigate the licensing process are most like to get a premises license, allowing the licensee to possess a handgun only at a specific residence or place of business.

Given the tough licensing rules, It's safe to say that the overwhelming majority of guns on the street are illegal; that is, the people carrying them don't have a license. Possession of a firearm without a license is a felony, punishable by anywhere from one to 15 years in prison.

"It's very, very strict in New York," Murray says. "Mayor Bloomberg has put a lot of pressure on the DA offices to come down hard on gun possession."

The illegal weapons floating around the city are often purchased in southern states like Georgia, North Carolina and Virginia along the so-called "Iron Pipeline." The Ruger .9mm used to shoot Officer Figoski was purchased at a Colonial Heights, Va. sporting goods store, by a man who claims that he lost the gun when he was evicted from his home in 2009, but never reported it lost or stolen.

Virginia is the largest out of state source of guns traced in New York crimes, according to a 2009 ATF report. For one Virginia police officer who has investigated illegal gun sales, it's the Old Dominion's gun expos - large gun shows at which private individuals who are not considered dealers can sell guns without conducting a background check and recording basic buyer information - that attract gun hungry criminals.

"We have some of the biggest gun expos in the country where buyers either don't have to fill out paperwork or get someone else to buy a gun and fill out the paperwork for them," the officer, who spoke on the condition of anonymity, says. "The expos are notorious. You'll see a lot of backdoor dealing there."

Guns are also making their way into the city via the internet. Just days after the Figoski shooting, Mayor Bloomberg announced the results of an NYPD investigation finding that 62 percent of online gun sellers contacted through websites like Craigslist and ArmsList agreed to sell guns to buyers who admitted they couldn't pass a background check, a felony offense.

For many firearm enthusiasts, the city's strict gun laws are not only ineffective, their also misguided. According to Charles Key, guns don't kill people. Criminals do. " You very seldom find police officers killed by priests, pastors or accountants," Key says. " It's folly to keep pointing fingers at a gun. You can ban one gun and criminals will find another one."

Indeed, while the city continues to enjoy nearly historic lows in violent crime, including homicides, its strict gun permitting process is nothing new. Bernie Goetz's application for a handgun license was reportedly denied back in the 80s, when the Big Apple was awash in crime. New York is certainly safer than it was in those days, but Officer Figoski's death is a reminder of the danger that criminals with illegal guns pose to both citizens and those who protect them.