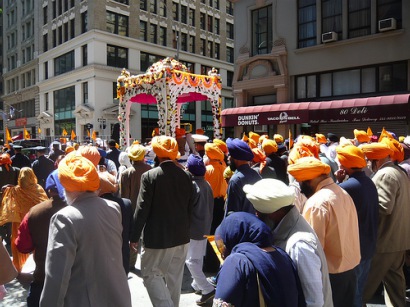 BELLEROSE, QUEENS — Navraj Deep has wanted to become a police officer since he was 10 years old, but as a member of the Sikh religion, he knows that he would have to give up his right to wear a turban if he wants to join the New York Police Department.

It is a compromise he is unwilling to make. “I really look forward to serving my community and being one of New York’s finest,” said the now-13-year-old teenager, on a recent Sunday at his temple, the Sant Sagar Gurdwara in Bellerose, Queens. “But this country is supposed to be free, and if it’s not free, then what are we here for?”

For years, Sikh community advocates have been trying to get the NYPD to reform its dress code to allow officers to wear turbans and full beards, which they say would give an equal opportunity for more Sikhs to become members of the city’s police force. And now they have found a potent ally in their cause — city Comptroller John C. Liu, who is expected to run for mayor and has been shoring up his visibility in the Asian American community.

“We get discriminated against by the way we look but people would get to know Sikhs in the NYPD,” said Gurdev Singh Kang, the president of the Sikh Cultural Society in Richmond Hill, Queens. Kang commented that the few Sikhs in the police force of such a diverse city are not recognized because they are clean-shaven. “Until they wear their turban and beard then they will know we are Sikhs.”

The NYPD has defended their policy, saying they do allow certain Sikh articles of faith in their dress code.

“The NYPD makes reasonable accommodations for religious beliefs, and already allows Sikh members of the service to wear turbans that fit under department headgear,” NYPD spokesman Paul Browne told The New York Post in an article published in August.

Browne also told the tabloid that officers are allowed to wear beards at a certain length, but added that in the case of an emergency officers may need to wear gas masks but “beards of a certain length will break the seal” allowing contaminated air to enter.

There are approximately 19 Sikhs in the city’s police department, according to Mayor Michael Bloomberg. 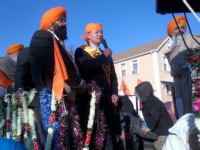 In October, Liu visited the Sant Sagar Gurdwara to gather support for his online petition (which currently has 277 online signatures) requesting that Mayor Michael M. Bloomberg include more Sikhs in the city police department by changing the policy to allow officers to wear full beards and turbans.

As Liu and members of his office entered the temple in orange Sikh bandannas, Babaji, the spiritual leader, welcomed his arrival and Liu began his speech with the Sikh greeting “Wahe-Guru!” — referencing the supreme teacher in Sikhism.

Liu said to the gathering of over one hundred Sikh devotees that he had “spoken to many young people who would love to serve the city and would love to be officers of the NYPD.” He pointed out that under the current policy Sikhs must choose between their faith and a job. He added, “That should not be a choice they have to make.”

Liu, who also visited the Baba Makhan Gurdwara in Richmond Hill in November, said the Sikh community deserves “a real change” to the city’s police dress code. He cited recent policy changes in the Washington Metropolitan Police Department and the Metropolitan Transit Authority that give employees the option of wearing turbans and growing beards.

Though the comptroller’s primary role is to review government contracts, Liu has sought to bridge the diverse New York Asian communities, which could play a role in any possible bid to be the city’s next mayor.

“Since the Asian American community in New York City is divided into nationality groups which are not necessarily natural allies, it makes sense for John Liu to reach out to the Indian American community by pursuing this anti-discrimination initiative for Sikhs in the Police Department in order to gain the support of the larger Indian-American community,” said Flora Davidson, a professor of urban studies and political science at Barnard College.

Harpreet Singh Toor, a leader of the Sikh Cultural Society, said the comptroller was taking a positive role for the Sikh community. “We are grateful, at least, someone is doing it,” he said about Liu. Toor mentioned that with Liu’s support, now Sikhs have a platform for an initiative the community has had on their agenda for years.

At the gurdwara, Liu explained that there are many issues that the Asian-American community faces, especially as immigrants who come to this country in search of a better life.

Amardeep Singh, the program director and attorney at the Sikh Coalition, said the group has been pushing police dress code reform for Sikhs for a decade now, starting with a lawsuit filed in 2003 for an NYPD traffic enforcement agent, Jasjit Singh Jaggi, who was told to remove his turban by the police department.

Jaggi said he resigned from the NYPD in 2002 after being pressured by his supervisor to remove his turban or risk losing his job. Jaggi later filed a complaint with the city’s Human Rights Commission and, two years later upon settling his lawsuit, was reinstated as a traffic enforcement agent with the right to wear his turban and beard. The case was the first in the country where a law enforcement agency was ordered to allow a Sikh employee to wear his turban and beard on the job.

However, only NYPD traffic enforcement agents are allowed to wear turbans and beards. The same religious accommodation has not applied to all Sikhs working as police officers.

Singh noted that since then pressure has been mounting on the NYPD to expand the policy for all Sikhs in the police department. He described the recent win of a $184,000 lawsuit in May on behalf of eight MTA current and former employees who were, according to the U.S. Department of Justice, “denied religious accommodations” under the MTA’s requirement after September 11th for employees wearing turbans to have an MTA logo or be transferred to non-public positions.

But Singh said that, in a meeting in December of last year, the NYPD’s commissioner of equal employment “affirmed that they won’t allow full Sikh turbans â€¦ Only as long as it fits under a NYPD police hat.”The head covering currently permitted for Sikh police officers is called a patka, an article of faith most often worn by Sikh children who are growing their hair to fit in a turban.

“If we can’t get the NYPD to change, we will identify those who wear turbans and keep filing lawsuits,” he said.

Singh explained that the coalition is looking for a Sikh applicant who would like to join the police department but is unwilling to give up the right to wear a turban. Singh said he expects the department to make a decision when the department is exposed in a lawsuit after being forced to reject a turban-wearing applicant.

Though two of the applicants have not passed the coalition’s internal review process, Singh said he is hopeful they will find a Sikh applicant within the coming year. “The NYPD won’t move on an issue until there is a body to push the initiative,” he said.

Democratic Assemblyman David Weprin, whose district has been redrawn to include Richmond Hill — which holds the largest Sikh population in the city — said some of the police department’s claims regarding beards were just not true. “There is no reason why the NYPD police officers can’t wear a turban and beard and do their job,” he said, mentioning in particular that Sikhs’ beards do not prevent the use of gas masks is not true. “Sikhs can tie up their beards in a crop cut,” he said.

Weprin said the issue with wearing beards and turbans in the police department could force NYPD to accept people with different articles of faith. “They are not being as receptive to people that don’t look like them,” he said.

The NYPD said it hired 898 new police officers in January, 59 percent of whom were white, 24 percent Hispanic, 11 percent black, and 6 percent Asian.

"In diversity, there's strength," said Police Commissioner Raymond Kelly in a Daily News article published in 2009 after an influx of Hispanic police officers were found to make up one quarter of the police force. "It helps the department in all aspects of its work, from community relations and conventional crimefighting to counterterrorism," he said.

But after Jaggi was reinstated wearing his turban and beard in 2004, Kelly told CNN he believed there were benefits to uniformity of appearances of police officers. “I think that's going to be kind of a governing thought, you might say, as we go forward," the police commissioner said.

In conjunction with Liu’s petition, Weprin is sponsoring legislation that he says would allow all uniformed employees in New York, including the NYPD, to wear religious garments such as yarmulkes, head scarves, turbans and full beards.

The bill was originally introduced three years ago, but Weprin said it had gained momentum following the growing need of understanding of Sikhism after six people were killed and three wounded by a white supremacist at a Sikh temple in Oak Creek, Wis., in August, one of the heart-rending fatal mass shootings this year that have led to increasing calls for more gun control measures. Weprin said he will be pushing the bill during January’s legislative session.

Sikhs, meaning “disciples,” follow ten gurus or spiritual leaders, the first being the 15th century founder Guru Nanak Dev who originated from northwestern India. The Sikh scripture is the Guru Granth Sahib, and Sikhs believe everyone regardless of caste, creed, race or gender has an equal opportunity in achieving liberation by becoming a part of God.

In 1699, the Sikh leader Guru Gobind Singh called on Sikh men facing persecution under the Mughal Empire to come forth as warriors to defend their community with uncut hair, representing the sanctity of the body and wearing turbans as symbols of nobility.

The Sikh community in New York City has been described as a rapidly growing immigrant enclave in Queens and primarily based in Richmond Hill. Nearly 21,000 residents of Richmond Hill, Queens, identified themselves as “Asian Indian,” according to 2008-2010 American Community Survey data. A gurdwara under construction in the neighborhood will have close to 65,000 square feet.

Toor, the community advocate, said the turban is an essential part of the Sikh faith because “it signifies that you are a master of your own destiny. It is considered like a crown on your head â€¦ And that someone is above you.”

But he said policies restricting turbans and beards like the NYPD dress code limits the jobs that young Sikhs choose. “The kids are in different fields instead of the uniform fields,” he said.

Indervir Singh, 25, a resident of Elmhurst, Queens, who passed the entrance exam to become a city police officer, said he would not change his appearance to suit the current policy because 500 years ago his Indian ancestors fought and some gave up their lives for the right to practice their religion.

“It’s God’s gift. If God gives you a gift would you throw it away? No, you would take care of it and keep it with love,” he said of his turban and beard.

Singh, who  said he does not understand why the NYPD cannot permit Sikhs who pass the entrance test and are qualified to be police officers, to also wear their turbans. “The policy excludes people like us,” he said.