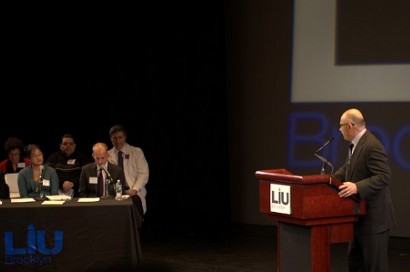 NEW YORK — Public health under Mayor Michael Bloomberg has largely come to be equated with smoking and trans-fat bans, calorie counts on menus and a limit on the sale of large, sugary drinks.

Candidates who hope to succeed Bloomberg, however, will be challenged with helping to rehabilitate public hospitals following Superstorm Sandy, a looming $3 billion city budget gap the could curtail spending and questions over what federal health care reform will mean for the city.

At a forum on public health on Wednesday, four mayoral hopefuls spoke about what they see as the critical needs of the public health system, agreeing that too many of the neediest New Yorkers remain without proper health care.

Democrats John Liu, William Thompson and Sal Albanese, as well as Republican Tom Allon each took turns on the stage at Long Island University in Brooklyn. The two expected frontrunners for the party nominations for mayor, Democrat Christine Quinn and Republican Joe Lhota, did not attend.

Liu, the city's comptroller, said he wasn't optimistic that the city could make up for a reduction in federal dollars caused by the Affordable Care Act.  “There's a big question mark around Obamacare," he said.

There is money to be found in the system to pay for improvements, but it might well take more audits to find it, he said. Liu pointed to numerous cases of health care fraud over the past few years which found the misappropriation of hundreds of millions of dollars.

Attacking corruption was something of a refrain for each candidate. Tom Allon, the sole Republican candidate to speak at the forum and owner of Manhattan Media, referred to Pedro Espada Jr, a former state senator who was convicted of looting hundreds of thousands of dollars from the Bronx health care network he founded. “That kind of stealing is probably still going on elsewhere in the city,” added Allon.

Fixing the city's hospitals is "a question of management,” he said.

That means being “smarter about where our dollars are coming from,” said former New York City Comptroller Bill Thompson, who held the office from 2002 until 2010.

Thompson, who previously ran for mayor in 2009 but lost to Mayor Michael Bloomberg by about 4.5 percentage points, took aim at his former rival by saying the problem of finding money in the budget was exacerbated by unresolved labor disputes with city employees.

Calling it "irresponsible" not to have set aside funding to cover those projected expenses, and with the budget hole fix still unclear, paying for better public health would be an immense challenge, Thompson said. Still, public health remains a priority.

"There are ways of saving money without sacrificing care," he said, noting that the hospital's network system needed to be revised to create a more efficient model. He said that as comptroller, he took the "unusual" step of looking into waste in the public health system.

While the short-term fixes were unclear, the candidates pointed to a common long-term solution: a preventative approach to addressing illnesses. By better educating children and by identifying early warning signs of disease, candidate Sal Albanese, a former Councilman who held office until 1997, suggested the city could save money going forward.

"We need pediatric wellness clinics" for those who cannot afford a doctor's visit, as well as "nurses who can go into a person's home" to help care for newly-born children as young as three months, he said.

Albanese, who previously worked as a health education teacher in the New York City school system, said he received his masters degree in health education free of charge, courtesy of the state of New York in the 1970s, when the state needed to encourage more qualified educators in the field. This kind of future planning should be continued, he said.

A model for the integration of health services in a school system, added Thompson, could be Cincinnati, which incorporates medical education and check-ups. This, he says, helps catch mental illnesses and diseases like diabetes, which may go undetected by parents.

While candidates mostly lauded Mayor Michael Bloomberg's record on public health, Thompson tried to take the fizz out of the soda ban, saying it was "good P.R., but a missed opportunity to do more for public health." That would include addressing the unequal distribution of parks and recreation areas available to the neediest.

Further, nearly all the candidates agreed the mayor erred in moving away from community-based organizations to address health care needs. Having CBOs could eliminate cultural in-sensitivities and other onerous burdens that would be placed on the patient.

By consolidating in the hopes of saving money, said Thompson, Bloomberg's policy left many underserved communities behind. “Health services should be closer to a community,” he said to applause.

CBOs would mean easing language restrictions, which Liu said can result in the death of patients. “I have constituents come to me and say a loved one died because they couldn't explain their health problem,” he said. Liu said he fought for equal language access as a councilman.

Sponsored by 22 organizations, ranging from the Commission on the Public's Health System to New York Immigration Coalition and the New Yorkers for Accessible Health Coverage, the forum offered a handbook to the attendees and candidates that highlighted key public health issues facing the city.

“The answers to all your questions are probably in this book,” Liu joked.

Jackie Vimo, a representative of the New York Immigration Coalition and forum member, called the book a “to-do” list for the next mayor of the city.

Those needs include identifying focusing on immigrant access, chronic conditions, and helping individuals with disabilities. The group further highlighted social determinants that factor into health, such as poverty, nutrition, lack of exercise, and low paying, potentially dangerous jobs that can pose a challenge to finding the time to see a doctor, she said.

According to the Immigration Coalition, almost 2.5 million residents are designated as “medically underserved,” further underscoring the challenge to serving them.

Judy Wessler, director of the Commission on the Public's Health System, said the problem was complicated by a system operating on "fuzzy math."

Hospitals that serve many Medicaid patients do not see enough revenue to remain open without public assistance, she said, but that assistance, which comes from the state, is often misused.

The next mayor needs to help address this, she added.

Hurricane Sandy further exposed the consequences of limited hospital options in cases of emergency when a handful of hospitals were forced to evacaute. Maimonides Hospital took on about 100 more patients as a result of Coney Island Hospital's closure. New York University's failed generators forced the evacuation of hundreds of patients the night of the storm, with some 200 patients transported to five hospitals throughout the city. In addition, the Bellevue Hospital Center emergency room and the VA New York Harbor Healthcare system remained closed for weeks after the storm.

"We had no plan for Sandy," Albanese said. "We're a crisis oriented society."