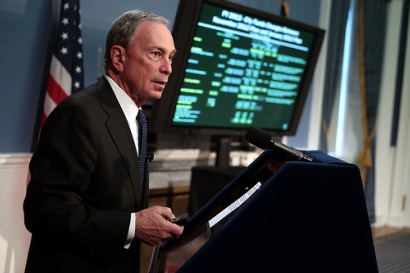 NEW YORK — Mayor Michael Bloomberg has proposed a $70.1 billion budget, the last of his administration, with no new taxes or layoffs and the costs of the recovery from Hurricane Sandy expected to be repaid by the federal government.

But some experts warned that the preliminary budget announced on Tuesday fails to set aside a sufficient reserve to settle expired labor contracts, which could lead the next mayor to make tough decisions about service cuts and tax increases. They say the budget also makes risky bets on one-shot sources of funding.

The nonprofit Citizens Budget Commission has called the unsettled labor contracts the biggest risk to the budget. "What you are looking at is a potential very, very big hit to the budget," said Maria Doulis, an analyst with the organization.

The Independent Budget Office has said settling the contracts could cost the city billions of dollars.

Overall, the mayor struck a note of growing optimism about the city's financial future, with revenues expected to increase modestly, with Wall Street rebounding and the local economy diversifying.

But fiscal policy experts warned the budget takes risks by relying on the sale of a new class of taxi medallions for additional revenue and a $1 billion drawdown from a health insurance trust fund, which would deplete it. Bloomberg's budget forecasts $600 million in revenue from the medallion sale, which has been frozen after current cab owners sued to stop it.

Observers have long warned that patching up the budget using a one-shot revenue source like the sale of taxi medallions was troublesome.

The IBO also warned in December after the mayor first announced that the city would not be burdened by the cost of Sandy aid "may prove to be a risky assumption."

"The possibility that the city will indeed have to shoulder some of the cleanup and recovery costs — as well as expenditures to mitigate devastation from future storms — remains very real," the IBO said.

In his announcement Tuesday, Bloomberg also said the city stands to lose out on hundreds of millions in state education aid because of the failure to reach an agreement over teacher evaluations with the United Federation of Teachers. The city is already expected to lose $250 million in such aid, which will lead to the loss of 700 teacher positions this year.

He went to Albany on Monday to call on state lawmakers to stave off the loss of state education aid, saying the UFT's demands were untenable and would be "a fraud on the public."

“My message today is simple: Do not punish our schoolchildren for the obstructionism of the UFT. Our children don’t deserve it. They have done nothing wrong," his testimony read. "They just need a quality education to survive in an ever more global and competitive world, and they can only get that with qualified teachers at the front of the room."

The UFT has blamed the mayor for the breakdown in negotiations. "Just as we reached a tentative agreement with the DOE, Mayor Bloomberg scuttled it and once again turned his back on our schools," said UFT President Michael Mulgrew in testimony.

The loss of teacher positions and other proposed cuts to services are expected to be at the center of budget negotiations involving the Bloomberg administration, the City Council, policymakers and advocates.

“This Council is committed to reaching a responsible, balanced budget that protects the vital services New Yorkers depend on," Council Speaker Christine Quinn said in a statement after the mayor's announcement. "We look forward to working with Mayor Bloomberg to ensure that a fair and balanced budget is reached on time and truly meets New Yorkers’ needs."

As expected, soon after the budget was announced, advocates, mayoral candidates and other elected officials began weighing in on the mayor's proposal.

The Campaign For Children, an advocacy organization, said Bloomberg was proposing to roll back the same cuts to after school and other programs that were restored in last year's budget.

Public Advocate Bill de Blasio, who announced Sunday he was running for mayor, tweeted: "Yet again, early ed & after-school programs are on chopping block, upending lives & leaving NYers scrambling. It's no legacy to be proud of."

"Mayor Bloomberg’s failure to work with labor unions and drop cooperation in favor of name-calling and vitriol has been harmful to our city; one need look no further than these budget problems," he wrote in a statement.

The preliminary budget will be followed by an executive budget, a budget negotiation in June, and then an update in the fall.

Image by Edward Reed, courtesy of the mayor's office.