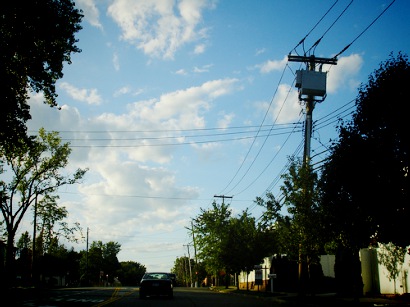 NEW YORK — Almost without fail, when a big storm hits the city, the power is knocked out somewhere. With Superstorm Sandy, it was much worse.

The day after the storm on Oct. 29, 2012, nearly 2 million resident were without electricity, with all of lower Manhattan south from 39th Street darkened along with large communities in Brooklyn, Queens and Staten Island. Wind or falling trees or limbs took down about 140 miles of cable. A record storm surge inundated substations and underground equipment.

In an effort to respond to the tremendous toll on the electrical system caused by the storm, the City Council voted unanimously on Wednesday to explore moving vulnerable overhead power lines underground.

Councilman Leroy Comrie, deputy majority leader and a sponsor of the legislation, said in remarks before the vote that the greatest impact of any study would be on the outer boroughs where most overhead power lines are located. "When we have a storm or ice storm or wind or heavy rain, we are losing power in our communities," he said.

Consolidated Edison, the utility that operates much of the city's electrical infrastructure, is exploring its options for dealing with the problem of overhead wires.

At a Jan. 18 Council hearing on emergency planning and management during the storm, John Miksad, a senior vice president of electrical operations at Con Ed, said the utility was "looking at selective hardening," saying that the utility had looked at burying overhead lines in the past but that "it is very pricey."

"But we think perhaps targeted undergrounding may be something that is appropriate," he said in his prepared testimony. "We're also looking at other system designs, with different polls, different connectors, different wire that would be more storm resilient."

The director of the Office of Long-Term Planning, Sergej Mahnovski, has also underscored that underground wires may be part of the solution — but certainly not the only one — to improving the resiliency of the electrical system.

"Underground networks have their own weaknesses, including vulnerability to flooding and salt deposition in coastal areas," Mahnovski said in prepared testimony dated Jan. 18. "Underground feeders are also more subject to overheating under peak summer conditions."

Since power outages have been the bane of urban communities for so long, the debate surrounding burying power lines underground is long and rich and has largely focused on the high cost of doing so. So while Superstorm Sandy may have exposed the fragility of the city's electrical system in a much larger scope, there was little surprise in it.