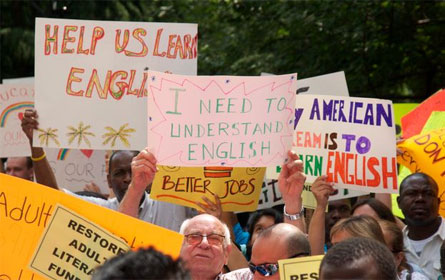 Photo by United Neighborhood Houses
A rally in City Hall Park in June protested the cuts in English as a Second Language classes and other adult literacy services.

Being a beautician is all Jong Ae Shul knew. She ran a beauty salon in Flushing for 25 years, serving mostly Korean-speaking customers six or seven days a week. She didn't need to speak English, and she had no time to learn it.

"I wanted to learn English so I can go to other places by myself," said Shul. "I was scared. I couldn't even take the subway because I didn't speak English."

Retired four years ago, she is making up for lost time.

Shul now studies English at the Queens Library's Flushing branch. And she loves it. She goes there for about three hours three or four times a week to attend classes, reads the textbooks, listen to CDs and get help from the tutors.

All of these activities are offered at the Adult Learning Center, one of the seven such centers in Queens. And the program, which includes English and civics classes as well as adult basic education, is absolutely free. Places in the program are awarded by lottery, and Shul is one of the few lucky ones who won one of the limited spots.

The free English classes are funded by the city. Traditionally, those free classes provided an opportunity for immigrants who otherwise cannot afford them. But the three primary sources of funding for the program -- Immigrant Opportunities Initiative, Adult Literacy Services Initiative by the City Council, and the Department of Youth and Community Development's adult literacy programs -- have suffered cuts that resulted in loss of 3,500 slots for potential students.

During the city budget negotiations this spring, Mayor Michael Bloomberg proposed eliminating the initiative's entire budget of $5 million, which already had been slashed from $11 million in fiscal year 2009-2010, as well as the City Council's $1.5 million. The mayor also wanted to cut $5.18 million in the youth department's adult education programs, which include English classes, civics and adult basic education classes.

After protests by community organizations and elected officials, in late June the City Council restored $1.5 million in funding for adult education programs, but the council's initiative suffered a $500,000 cut while the Department of Youth and Community Development received a $1.6 million cut.

Many viewed restoration as a victory. But the pain of cuts has already been felt.

"Every year we are under the threat," said Susan Dalmas, adult learning program manager at Queens Library.

The library in Flushing regularly runs 34 conversational English classes, ranging from beginning to intermediate. In September, the number of classes has been cut to 27, according to Alla Osokina, director of its adult learning center.

"We will have to find other ways to provide services to our students," Osokina said, noting that there are only four full-time administrative staff serving more than 600 students in English, civics and computer classes. With the cut, the center lost a full-time instructor and the other instructor’s workload has been reduced to half.

In the fall, the center will rely heavily on interns and volunteers to teach classes. "The quality of classes would not be the same as there will be fewer classes taught by professionals," said Osokina.

At CAMBA, a nonprofit community-based organization in Flatbush, Brooklyn, 16 of the 92 three-month classes it offered last year were funded by the Department of Youth and Community Development. This year, four of them were eliminated, and half of the remaining classes were reduced from 17.5 hours to 12 per week.

"As of today, we have 1,027 applicants on our waiting lists," said Jude Pierre, a program administrator at CAMBA.

Meanwhile, Korean Community Services for Metropolitan New York, which provides community services such as day care, a senior citizen center and public health programs, has also cut the hours of the free English classes. The center, on the north side of Kissena Park, runs four semesters per year and has cut each semester from 10 weeks to seven weeks because it is receiving 30 percent less funding than it did last year.

More than 200 students attend the program and 100 people are on the waiting list, According to Annie Shin, the English as a second language coordinator,. The average wait to get into a class is six months.

"They can go to fee-based programs, but many of the schools, like colleges and institutions, are targeting the students who want to pursue colleges or higher education, not basic literacy levels," said Shin. "So even though our students are willing to pay, they cannot follow the course since it is too difficult for them."

Some places are facing a total loss of city funding. Flushing Jewish Community Center, located on Bowne Street, is one of them. It stopped offering ESL classes in July because its contract with the Department of Youth and Community Development was not renewed.

"The funding is completely gone," said Megha Mehta, a social worker at the cent. "The recession hit us badly."

"We are still applying to other agencies," Mehta added. "We were hoping that we could offer something in September. That doesn't seem likely the case anymore."

Many immigrant advocates expect the cuts to continue. They note that the restoration by the City Council applied only to this year.

"Let's not go through this budget dance every year," said Anthony Ng, deputy director of the United Neighborhood Houses, an umbrella group of community centers and settlement houses. "We'd like to see the mayor stabilize the funding, make it permanent."

A Zeal for English

On a recent Friday afternoon, Christine Fisher worked with nine students in a basic conversation class in the Flushing library. Seven of her students are from China, one India and one from Colombia. At least two people needed reading glasses. and four had electronic dictionaries. More than half of the students are unemployed or retired.

Zhi KangYao, 66, who retired from a business association in Shanghai six years ago and moved to Flushing, said his goal is to be able to read and communicate with others in English.

"My generation didn't learn English. We learned Russian," said Yao, who said he has no income and cannot afford to pay to go to school. "This is a wonderful opportunity for me to learn English so I can read the documents I receive in the mail."

Ling Chen, a native of Shandong Province, China, said it took her three tries before she won a spot in the class by lottery.

"I just kept trying," said Chen, who was a kindergarten teacher in China and now baby sits for her daughter. "My goal is to be able to talk to Americans."

Yao and Chen would not be able to attend classes if they had to pay.

"This is a segment of the immigrant populations that by and large do not have resources to pay for these kinds of programs," said Fisher. "If we continue to be a country that welcomes immigrants, we have to be able to support them."

After learning basic English, some of the students find jobs or continues their education.

Ray Li, a former English student at the Flushing library, moved on to attend LaGuardia Community College and then City College of New York. He is majoring in electrical engineering.

"I love this program," said Li, 24, who now works part-time at the library’s adult learning center. "I was new in this country and I found a community here. This place is full of information, not just about learning English. The people who have been here longer always share a lot of tips about living in America with the new immigrants."

Students who reach fifth-grade English proficiency can take classes to prepare for the General Equivalency Diploma or GED exam. Wai Bing Chan, 62, is one of the success stories. After finishing the ESL program, she continued with the pre-GED program and got her high school equivalency diploma last year on the first try.

"It was my biggest accomplishment," said Chan, a native of Hong Kong who came to the United States 15 years ago. "We didn’t have opportunity to go to school because the economy in Hong Kong was not very good. Now I have a chance to study and I don’t have to pay."

"At least now we can communicate with Americans. We don't always have to stay in Chinatown," said Chan. "We know more about the culture."

As for Shul, the retired beautician, she is having the time of her life learning English at the library.

"Here, I can’t speak Korean," said Shul, adding that her English is still broken but she is not afraid to speak it. "I speak and speak. I am really happy."