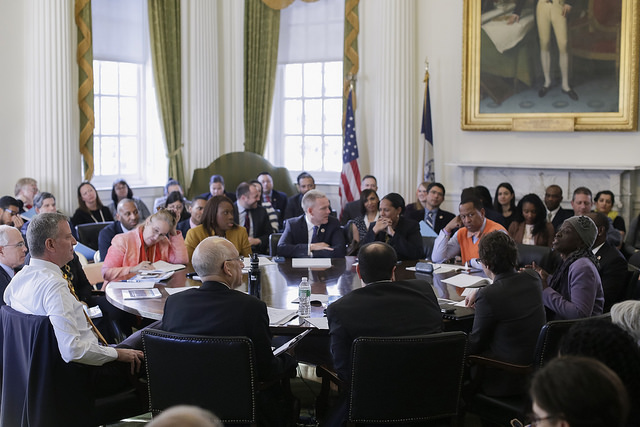 The City Council on Monday issued its formal response to Mayor Bill de Blasio’s $82 billion preliminary budget for fiscal year 2017, capping a month of budget hearings that were fraught with concerns over how Governor Andrew Cuomo’s proposed state budget would affect the city and how prepared the city’s coffers are for a rainy day.

Until last week, uncertainty over significant cuts in funding to New York City outlined by Cuomo had the City Council on its toes, with Council Speaker Melissa Mark-Viverito traveling to Albany to participate in efforts to eliminate them. The de Blasio administration said at the first Council budget hearing that it did not have a contingency plan if the state were to shift nearly $700 million in costs for Medicaid and CUNY in fiscal 2017 to the city. Instead, officials said, they would be making every effort to ensure that the cuts did not stay when the state budget was passed.

In a letter to the mayor on Wednesday, the Council identified its budget priorities but stopped short of issuing its full response given that the state budget had yet been finalized.

At the end of last week, a new $147 billion state budget was passed without the most significant cuts to city funding, and the Council had the all clear to move forward with its priorities unchanged. Out of a budget process so far largely focused on identifying savings across city government, the Council outlined specifics for a city budget that serves immigrants and youth, sets aside more in reserves, and invests in expanded services that it can track.

“The Council’s budget recommendations are the culmination of dozens of comprehensive budget hearings and reflect the needs of all New Yorkers while also planning for our City’s future,” said City Council Speaker Melissa Mark-Viverito, in a Monday statement accompanying the Council’s budget response, which will form the agenda over the next three months as it negotiates a final budget with the mayor’s office by the June 30 deadline. “This is a budget that is smart, fair and fiscally responsible, all while greatly expanding opportunities to New Yorkers across the City,” Mark-Viverito wrote.

The Council is proposing $790 million in new spending and tax reductions but estimates that the increase to the budget would ultimately be only about $127 million once larger agency savings and changes to debt service payments are included. Even with additional spending, the Council estimates a budget surplus of $258 million in fiscal 2017.

The Council identifies $91.2 million in agency savings that the preliminary budget did not account for. A majority of this amount, $80 million, would come from reducing the city’s contribution to fringe benefits for the Administration for Children’s Services (ACS) and the Human Resources Administration (HRA), which have received increased state and federal funding for these costs, the Council says.

The response also calls for reduction in the city’s data processing equipment budget by $14 million and a $6 million reduction in Other Than Personal Services costs at the Department of Transportation. All of these savings figures were arrived at through analysis by the Council’s budget office, which is under the supervision of Mark-Viverito, Council Member Julissa Ferreras-Copeland, who chairs the finance committee, and Finance Director Latonia McKinney.

Although the state budget no longer haunts the city’s fiscal future, the Council recognizes risks remain. An economic slowdown is widely expected by city officials, economists, and budget watchdogs, and the Council’s budget response notes the consequences it could have on consumer spending, tax revenue, real estate prices, and cost of living.

“These preliminary budget recommendations reflect a central challenge in government: making our city more equitable while also planning prudently for the future,” said Ferreras-Copeland, in a statement. “The proposals included address inequality in New York City while remaining fiscally responsible, and I believe they represent the diversity of needs across our city. As the budget process advances, I will continue to ensure that the Council is an equal partner and that the Administration’s investments are transparent.”

The budget is due before the start of the next fiscal year on July 1. Along with the state budget, Mayor de Blasio will take the Council’s feedback into consideration as he crafts his executive budget, due out later this month. The release of that updated spending plan, which the mayor has indicated will likely include a more robust agency savings plan, will trigger another round of hearings at the City Council. Then, the two sides will negotiate out of public view until a deal is struck.

Asked to respond to the Council’s preliminary budget response, Office of Management and Budget spokesperson Amy Spitalnick, recounted by email that “Budget monitors and rating agencies have all applauded this administration's fiscal prudence and focus on targeting investments and protecting against economic uncertainty – and investors agree,” while providing a link to a Bloomberg news article on the subject.

Spitalnick outlined that the administration has “unprecedented” reserves while restoring “funds cut under the prior administration.” Even with billions already in savings, she wrote, “the Mayor has made clear, we’ll continue to build on those savings in the Executive Budget.”

“We look forward to continuing to work with the Council throughout the budget process,” she said.