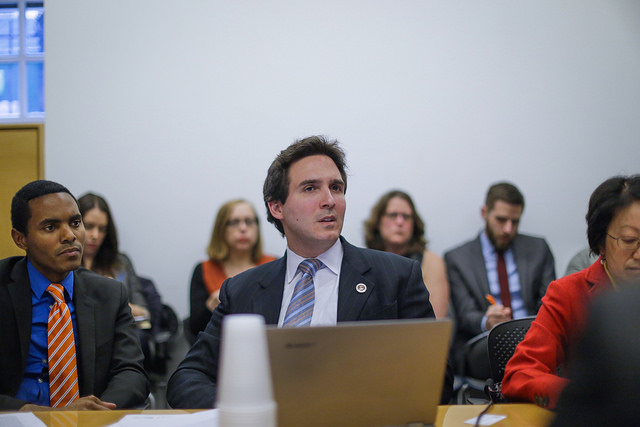 As Mayor Bill de Blasio is mired in controversy over his fundraising activities and proximity to lobbyists, the City Council is moving on bills to reduce the possibility of ‘pay-to-play’ campaign financing and make significant tweaks to strengthen an already-robust public-matching system.

The Council’s Committee on Governmental Operations held a hearing on Monday to examine a package of eight bills that would reform campaign finance rules and improve the city’s public matching funds program, which, though it has some critics, is often held up as a national model.

The bills, introduced in November, aim to implement recommendations made by the New York City Campaign Finance Board (NYCCFB) after the 2013 city election cycle. Perhaps most notably, the bills would eliminate public matching funds for contributions bundled by people who do business with the city, provide earlier public matching funds to candidates, and improve disclosure requirements for companies or people that own entities that do business with the city.

Council Member Ben Kallos, chair of the committee and prime sponsor of three of the bills, was particularly concerned about Intro. 985-A, his proposal to limit the influence of bundlers.

“I think it’s a matter of the public who want their voices to be louder than those of special interests to let their elected officials know that they need to sign on to this bill and they need to bring it to the floor of the Council,” Kallos told Gotham Gazette after the hearing.

Kallos got a boost during the hearing when Council Member David Greenfield asked to be added as a sponsor to the bill. The next step will be to drum up support from other Council members and, most importantly, Council Speaker Melissa Mark-Viverito before the bills can be voted through committee and head to the full Council. The process is still in its initial stages as the committee took expert testimony Monday, Greenfield would become just the fourth Council member, of 51, to sponsor 985-A.

Almost everyone who testified seemed to acknowledge that 985-A and Intro. 986, the early matching funds bill, were the more significant proposals. A number of good government groups also came out in support of the entire legislative package.

Prudence Katze, research and policy manager for Common Cause New York, commended the city and the campaign finance board for progress administering “accessible” and “clean” local elections. “But, we still have many ways to improve and the bills before the Council today all go towards plugging the holes that still exist,” she said.

Dick Dadey, executive director of Citizens Union, also backed all the bills, but said 985-A was possibly the most “meaningful” and should be the Council’s number one priority. “It’s a common sense, much-needed piece of legislation, even more so given the rising scandals, the growing crime wave of corruption we see here in Albany that now seems to have reached down into New York City,” Dadey said.

Campaign Finance Board reps strongly praised all the bills, albeit calling for the early matching funds bill to only go into effect after the 2017 elections so that all involved in the program can be properly prepared. Kallos said he was willing to make this change. “City lawmakers have regularly refreshed and updated the [campaign finance] program,” said Amy Loprest, executive director, NYCCFB, “ensuring it stays relevant as city campaigns and elections evolve.”

Loprest also listed a number of measures the board has recently initiated to improve the system, including the implementation of an online contribution platform to help donors comply with campaign finance regulations, improved disclosure software, increased candidate trainings, and timely enforcement.

“The bills before the committee today will help modernize the program,” Loprest said. “They will remove outdated or unnecessary requirements the law imposes on campaigns, help candidates better plan their campaigns, and importantly, they will strengthen the law’s protections against the influence of pay-to-play.”

In a sign that the legislative package is likely to move forward, Henry Berger, special counsel to Mayor de Blasio, expressed the administration’s support for the eight bills “with a few technical corrections.”

Berger noted, however, that the proposals do not address the CFB’s reliance on post-election auditing and enforcement procedures “which threaten the proper administration of public matching fund payments.” Noting that the CFB only started issuing audit reports for 2013 public fund recipients in May of 2015, he stated the administration’s interest in working with the Council on legislation to ensure that the CFB completes enforcement and payment determinations sooner in the election cycle. “Rather than piecemeal adjustments, the city needs a comprehensive overhaul to give every candidate a full and fair opportunity to respond to and resolve specific allegations in a timely manner before the election,” Berger said. “No candidate should be deprived of any public matching funds he or she has earned on the basis of unresolved allegations.”

The hearing also saw consideration of two resolutions, sponsored by Kallos, calling on the state Legislature to pass the Voter Empowerment Act (VEA) and a constitutional amendment that would establish no-excuse absentee voting in the state. The VEA is a joint effort by State Senator Michael Gianaris and Assemblymember Brian Kavanagh, who was at the hearing. The omnibus bill would provide automatic voter registration and online registration, and change the state’s deadlines for people to register and choose their party enrollment.

When Kallos asked what the city could do to help push these bills in Albany, Kavanagh appealed to Council members to drum up public support and to urge their Assembly member to join his effort before the end of the legislative session in Albany on June 16. The CFB’s voter outreach arm, NYC Votes, is helping to lead a lobbying coalition to Albany on Tuesday in support of the VEA.

“Hope springs eternal,” said Kavanagh, pointing out the extra attention these issues have received because of the primary election day debacle. “What we need candidly is public pressure,” he added.