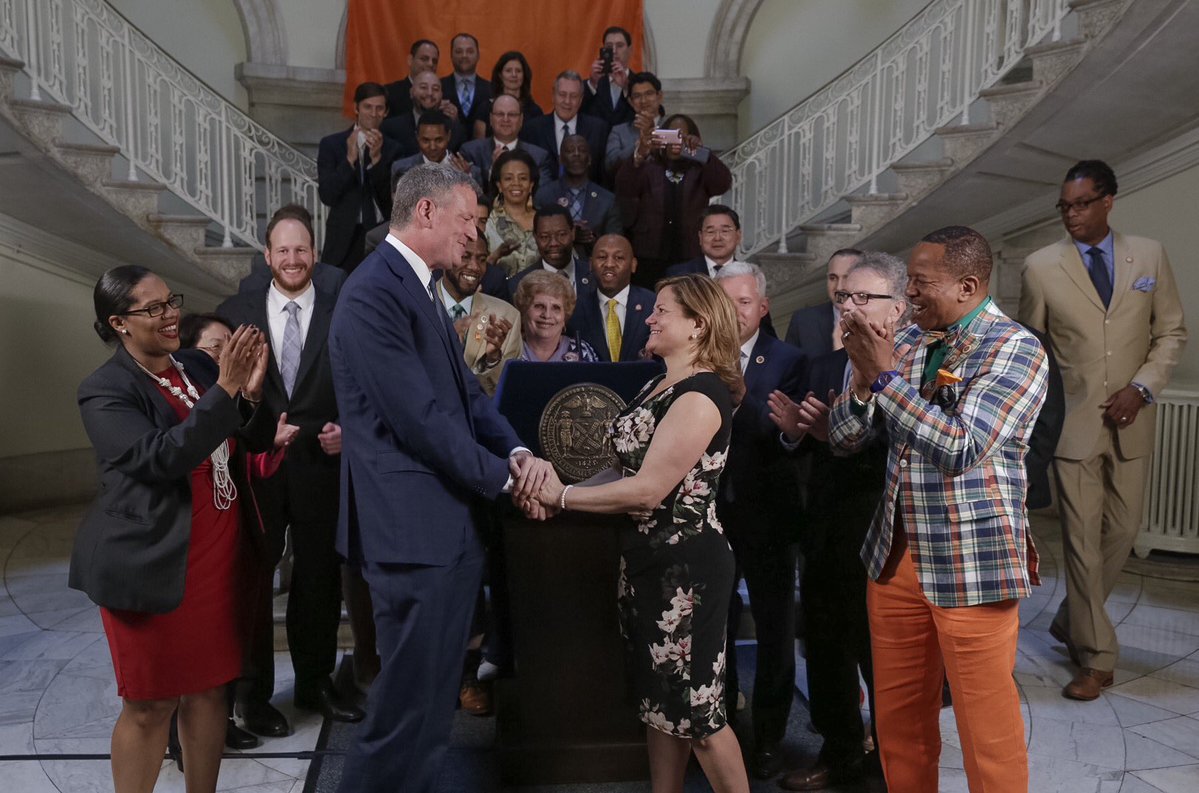 Mayor Bill de Blasio and the City Council announced a deal on an $82.1 billion budget for fiscal year 2017 on Wednesday, marking the earliest date in 15 years that a budget agreement has been reached. De Blasio and City Council Speaker Melissa Mark-Viverito undertook the ceremonial handshake at City Hall after presiding over a press conference announcing the details of the deal, including the significant changes from the mayor’s executive budget plan.

An early budget was largely expected this year. There were few major points of contention for the City Council and the city is currently riding high on strong revenues and large fiscal reserves. The final spending plan is about $100 million less than the proposed executive budget, thanks to new projections and with the administration having responded to the Council’s concerns about additional savings, rainy day funds, and increased spending toward a variety of Council priorities, like library service and summer youth employment.

“We believe in budgets that are responsible, that are honest, that are progressive, and we believe this budget meets those criteria,” said de Blasio at the announcement. He stressed that there had been a “constant effort to find savings and offsets” and that the negotiation with the Council had been collegial even as the administration capitulated to the Council’s concerns in areas that weren’t its priorities.

Heeding the Council, the administration added another $440 million over the next two years to the current Citywide Savings Program, totaling $2.7 billion. The city also increased reserves by another $250 million, which was added to the Retiree Health Benefits Trust fund, for a total of $3.9 billion. The $1 billion General Reserve and $500 million Capital Stabilisation Reserve remained stable. The city is well prepared for an inevitable economic downturn, de Blasio and Council leaders said.

Of the issues and programs the Council had identified after the preliminary budget, the executive budget only included about $62 million in funding. The final plan bumped that up by $393 million for a total of $455 million. This funding will go to investments in city youth, cultural institutions, emergency food assistance, seniors, the offices of the District Attorneys, to name a few.

The budget baselines $39 million for 60,000 slots in the Summer Youth Employment Program, which provides six weeks of paid work to city youth between 14 and 24 years old. Another $21 million is being baselined to maintain six-day service at public libraries, which was first passed last year, though not baselined, and $10 million in additional funding is included for cultural institutions. The five district attorneys will receive $22 million in new city funding.

“This is a smart, responsible budget agreement,” Council Speaker Melissa Mark-Viverito at the announcement. “Not only are we expanding vital city programs...but we’re also strengthening reserves and safeguarding the city’s future.”

While budget monitors and fiscal watchdogs have praised the city’s budgeting and current fiscal health, there have been concerns over the cushion of reserves in the eventuality of a downturn. Comptroller Scott Stringer in particular has warned that the city needs to put more funding aside for the future.

“This budget also plans for the future,” Council Member and finance committee Chair Julissa Ferreras-Copeland reiterated Wednesday. “We now have about about 10 percent of the budget in reserves, and we are building towards 12 percent to be able to withstand any downturn. Today we are proud to shake on a budget that addresses inequality responsibly.” Stringer believes the budget cushion - or savings related to annual expenses - should be 12 to 18 percent. De Blasio said that the city is in great shape, dismissing the notion that reserves are not where they should be when Gotham Gazette referenced Stringer’s recommendations on Wednesday. The mayor said he appreciates that the comptroller is focused on savings, though.

With the “budget handshake” concluded, the final spending plan will head to the Council floor for formal approval at the next Stated Meeting. (There is currently a stated meeting scheduled for June 21 but one could be called at an earlier date to pass the budget.) The new fiscal year begins July 1.

There are still items that need to be worked out, though, particularly the administration’s plan to overhaul the city’s municipal health care system, New York City Health + Hospitals. Speaker Mark-Viverito said the Council would continue its own oversight of the plan and “some of those concerns are still ones that we’re engaging in conversations.”