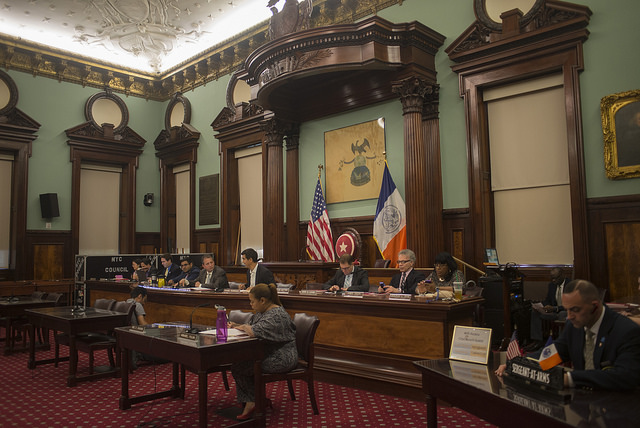 With the latest New York City Campaign Finance Board filing deadline just passed, the 2017 city elections are beginning to take more clear shape. The races for Mayor, Public Advocate, Comptroller, Borough Presidents, and City Council members may be currently overshadowed by the presidential election, but the new city campaign finance filings further reveal who is planning to run for which seats in 2017 and the extent to which candidates for local positions have been successful in their fundraising efforts.

While money isn’t everything - and the city’s public-matching program rewards small donations and helps allow more candidates to compete - the financial activity outlined in campaign filings is indicative of both the amount of support candidates have so far and their chances of success next year.

Many in and around city politics are watching to see who emerges to challenge Mayor Bill de Blasio in his re-election bid. But, that is not the real story right now. The City Council won’t see much turnover in 2017: just eight of the Council’s 51 members are term-limited from running again and must be replaced. But, these are the only seats in city government where an incumbent cannot seek reelection next year - all three citywide officials, all five borough presidents, and the other 43 Council members can all seek another term (this is in part due to the fact that some are allowed a third term after term-limits were temporarily lifted in 2008).

The latest CFB filings show intense competition brewing in several of these eight districts as voters will be asked to replace City Council Members Rosie Mendez, Dan Garodnick, Melissa Mark-Viverito, Inez Dickens, James Vacca, Annabel Palma, Darlene Mealy, and Vincent Gentile. All of these term-limited members are Democrats - 48 of the Council’s 51 members are currently Democrats - so the September 2017 primaries will very likely be the key vote to determine this next class of local legislator.

One other significant theme to watch is that five of the eight outgoing members are women (and women of color) - the Council currently includes just 14 women among its 51 members, something that Mark-Viverito, the Council Speaker, and others have repeatedly raised as a concern going into the next round of city elections.

And while additional candidates could easily declare in the coming months - the primary is not for another 14 months - CFB filings show the following candidates in each of the eight districts where the current City Council member is term-limited:

District 2: Manhattan, Lower East Side - currently represented by Rosie Mendez
Thus far, the only candidate filed to run to replace Mendez is Carlina Rivera. Born and raised in the LES, Rivera is currently a district leader of Assembly District 74 and Mendez’s legislative director.

According to the CFB, Rivera has raised $47,932 in campaign funds, $47,208 of which was raised in the last six-month filing period. Rivera reported spending $1,581 during that time. Rivera has won an endorsement from CoDA (Coalition for a District Alternative), an independent progressive political organization from the Lower East Side, who announced their support for her on Twitter in March.

District 4: East Side of Manhattan - currently represented by Dan Garodnick
While Garodnick appears to be eyeing a statewide run for Attorney General or State Comptroller in 2018 or beyond, according to Politico in January, after he leaves the Council, several candidates are looking to replace the term-limited Council member.

Garodnick has a 2017 city account open (he could mount a run for city Comptroller or another office in 2017 or beyond) but it saw no activity this filing period - it holds an estimated balance of $191,624. Additionally, Garodnick has $888,124 in private funds left in the citywide account he opened in 2013 when he flirted with a run for Comptroller. Garodnick could move city funds into his statewide campaign account, which he has already registered with the State Board of Elections as “New Yorkers for Garodnick.” The account began filing almost a year ago and holds $515,544 as of July 20.

As for Garodnick’s successor in the City Council, according to the latest filings, four candidates are vying to replace him: Diane Grayson, Jeffrey Mailman, Keith Powers, and Martha Speranza.

Mailman, a legislative aide to Queens Council Member Elizabeth Crowley, raised $20,378 in the past six months, and spent $2,198. Crowley has donated to Mailman, who is a member of Community Board 6.

Since announcing his campaign on June 2, Powers, Vice President at Constantinople & Vallone Consulting and a leader of Community Board 6 and the Eleanor Roosevelt Democratic Club, has raised $50,077 and spent $585. On July 18, Powers told Town & Village that his fundraising thus far has been “a grassroots effort that is supported by average New Yorkers and small contributions.”

Speranza, Democratic State Committeewoman for the 74th Assembly District and member of Community Board 5, currently boasts “the earliest and strongest fundraising start to any Council campaign in New York City history” according to a July 20 press release from her camp.

Meanwhile, Grayson is on the opposite end of the fundraising spectrum - she has set up a Facebook page announcing her City Council candidacy, but as of the latest filing deadline she has neither raised nor spent any money. When asked by Gotham Gazette, Grayson explained, “Campaign finance reform is something I care deeply about, and I want to be the candidate that represents many people in the district who would ideally like to reduce money in politics.” Grayson has pledged to run her campaign on a $50 budget, and if elected, donate back $50,000 of her salary “to projects that benefit the community.”

District 8: Manhattan's El Barrio/East Harlem and a slice of the Bronx - currently represented by Melissa Mark-Viverito, also the City Council Speaker
Like Garodnick, Mark-Viverito has money in the bank and no clear post-Council plans. In the past six months, Mark-Viverito raised $186,581 and has an overall estimated balance of $319,911 in her CFB account.

As Gotham Gazette reported earlier this month, Mark-Viverito has already endorsed Diana Ayala, currently her deputy chief of staff, to be her District 8 successor. Ayala’s first campaign fundraiser was held July 7, and according to the most recent filings, her campaign has raised $11,273 and spent $531 in the past six months. Based on their donations, Ayala is also backed by several female Council members, including Margaret Chin, Elizabeth Crowley, and Helen Rosenthal. Ayala also seems to be allied with District 2 candidate Carlina Rivera; they have donated to each other’s campaigns.

So far, Ayala’s only opponent appears to be Edward Gibbs, who trails her in fundraising, even though he started campaigning as early as November of last year. During the past six months, Gibbs, a former convict turned community activist who ran for State Assembly back in 2010, raised $3,545, bringing his estimated balance to $5,562.

District 9: Harlem and other parts of Upper Manhattan - currently represented by Inez Dickens
Dickens is said to be strongly leaning toward a run for State Assembly, namely the seat currently held by Keith Wright, who promised during his congressional campaign, which he lost, to not seek reelection. Many expect the two to attempt a seat-swap.

Short of that, right now the race to claim Dickens’ seat is not much of a race at all. Only one candidate, so far, has made known his intention to run by filing with the CFB: Donald Fields.

According to his Linkedin profile, Fields is currently a managing partner at Fields & Associates, and does not yet seem to be a competitive candidate. Fields’ CFB records reveal that he has only raised $165, while having spent $20. Fields has not raised any money since the CFB’s third deadline of this cycle, which was about 18 months ago. Fields was not made available to Gotham Gazette for comment and it is unclear if he is actually running.

According to his campaign website, John Doyle has been a life-long resident of the Bronx, and is currently working as the Associate Director of Public Affairs at Jacobi Medical Center. Issues that are important to Doyle include government accountability and public safety. Doyle has raised $10,816.34 in the last six months and has raised $33,835.93 in total. He currently has $25,544 on hand, minus expenditures, according to his last filing.

Alex Gomez, according to his campaign website, has spent 20 years of his life working in social service, with “New York City's youthful offenders, and under employed and unemployed youth, young adults and adults.” Gomez, according to his filings, has raised $1,080 in the last six months, and $3,299 in total. Interestingly, Gomez has received $1,117.45 in-kind contributions; these particular contributions do not come in checks or cash, but rather as gratuitous services. The bulk of the in-kind contributions is from Gomez's sister, who created a campaign video that has yet to be released. According to Gomez’s last filing, he currently has an estimated balance of about $3,148. Gomez boasts that he is "the only candidate [in CD13 the race] to not take monies from unions, corporations, real estate developers, businesses or PACs."

According to John Marano’s campaign website, he has worked as a NYPD officer, a NYC Fireman, and served Community Board 10 as its Chairman. Marano volunteers in a number of local organizations. In terms of campaign fundraising, Marano has raised $24,855, all of which was raised in the last six months. He currently has $22,474 on hand.

District 18: Parts of the Bronx including Hunts Point, Parkchester, and Soundview - currently represented by Annabel Palma
Only one candidate has registered a campaign to replace Palma: Dwayne Gathers.

According to Gathers’ CFB filing, he has yet to raise any funds for his campaign. But, Gathers only registered his campaign with the NYC Campaign Finance Board on July 11, 2016. In a phone interview with Gotham Gazette, Gathers confirmed his intentions to run for the District 18 Council seat.

District 41: Central Brooklyn including parts of Bedford Stuyvesant and Crown Heights - currently represented by Darlene Mealy
Two candidates have filed to campaign for the vacancy being created by Mealy’s departure: Deidre Olivera and Boris Santos.

District 43: Southern Brooklyn including Bay Ridge - currently represented by Vincent Gentile
According to CFB listings, there are no candidates who have filed to replace Gentile. That does not mean that the seat will go vacant come 2018, of course.

Last year, Gotham Gazette reported that Justin Brannan, a former aide to Gentile who now works at the Department of Education, is a very likely candidate, and he remains a near certainty to run, though he declined to comment for this story. Gotham Gazette also reported that Linda Sarsour, a political activist and nonprofit leader, could run for the seat. As was the case at the time of the Gotham Gazette story, Sarsour remains focused on her advocacy work, which often deals with national issues. Without indicating her own candidacy, Sarsour - who is Arab American and runs the Arab American Association of New York - did recently tell Brooklyn Paper that, “Our community is having our own personal conversation about it...Someone who is Arab-American is definitely running in 2017. That is a fact.”

Note: this article has been updated to more accurately capture the nature of the in-kind donations to Alex Gomez's campaign.