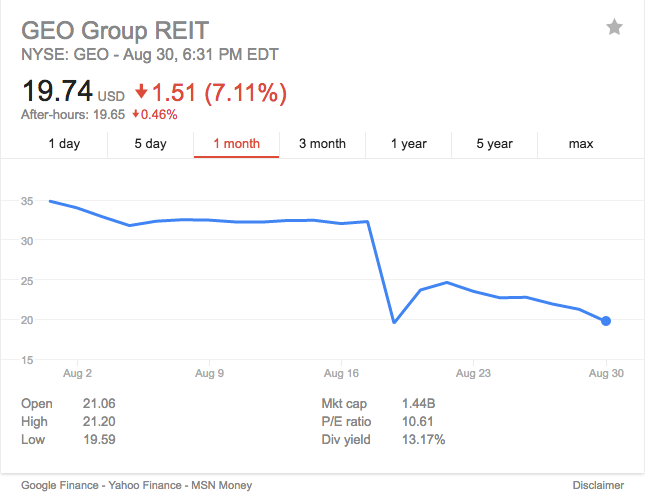 A recent decision by the federal Department of Justice to scale back and eventually end the use of private prisons indirectly impacted New York City’s pension funds, reducing holding values by millions of dollars and leading to renewed calls from activists for the city to divest from the for-profit corporations that operate these prisons.

Earlier this month, the Obama administration took a major step against an industry that has long been criticized for its culture of violence, secrecy, and the devaluation of human life: private prisons. The administration announced that owing to a decrease in the federal prison population, it would begin to reduce its reliance on private prisons run by for-profit corporations.

The decision was also based on a DOJ report that determined private prisons to be costly, unsafe, and inefficient in reducing recidivism.

The effects on the industry were immediate, with stocks of the two largest private prison corporations in the United States, the GEO Group and the Corrections Corporation of America (CCA), plummeting by about 40 percent in a day. They briefly rebounded and then fell again on Monday when the Department of Homeland Security indicated that it would evaluate, and possibly eliminate, the use of private immigration detention facilities.

This news has some impact here in New York, both financially and symbolically. Although New York State does not have any private prison facilities, New York City’s five pension funds together had roughly $20 million invested in the GEO Group and CCA as of May (GEO does have an immigration detention facility in Queens and a re-entry location in the Bronx). Considering the drop so far in the value of those stocks, the investment has likely lost close to $8 million. Although the number itself is a pittance compared to the altogether $160 billion pension fund, it’s largely the principle behind the investment which has raised concerns. Activists say it’s both a diminishing avenue of investment and one that contradicts the proclaimed progressive bonafides of the majority of the city’s elected officials.

“It may be a small amount but morally it’s bankrupt and financially it’s bankrupt too,” said Randy Credico, a WBAI radio host, regular political candidate, comedian, and activist who has been advocating for the city to divest from private prisons for years. He created End Prison Industrial Complex (EPIC) to push the issue with online petitions and has organized protests in prison garb outside Comptroller Scott Stringer’s office. 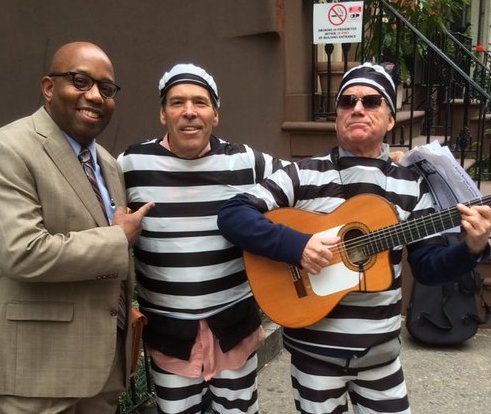 Credico (pictured, middle) said there is a national movement against mass incarceration, among both Democrats and Republicans, and that the only way private prison stocks could go up was if mass incarceration went up. “It’s only gonna get worse,” he said. “These stocks are going nowhere. They prey on human misery. They’re in the human cargo business.”

He called it a “dark mark” on New York’s history that the City is still invested in private prisons and said the city’s pension trustees need to follow the likes of Columbia University, General Electric, the United Methodist Church, Pershing Square Capital Management, and others that have all pulled out of private prison stocks.

Credico, as is evident by his protests, points namely to Stringer, who is the custodian and financial advisor to the five public pension funds in the city, for having failed to recognize a bad investment as well as not having stuck to his progressivism as an outspoken critic of mass incarceration. While Credico’s ire may be focused on Stringer, he is but one player in a larger investment game.

A spokesperson for the comptroller’s office spoke to Gotham Gazette about the process by which investments are made and said that the Comptroller, who is also on the Board of Trustees of four of the funds, does not have absolute authority over investments or even the choice of companies in which to invest. The Comptroller advises the five pension funds and the funds each approve of an asset allocation composed of a mixed bag of assets, including a significant amount invested in public equities. The majority of stocks owned by the funds are held in passive index funds, such as the S&P 500 or Russell 2000. The holdings in private prison companies were likely acquired through their ownership of these indices.

Stringer has sought to use his pension fund leverage on other issues, such as corporate board diversity.

The Obama administration’s announcement has not escaped the comptroller’s attention. “The Justice Department report made clear that the private prison industry’s claims of superior cost savings and effectiveness over government-run prisons do not stand up to close inspection,” Stringer said in a statement to Gotham Gazette. “The private prison industry’s continued failures in safety and security as well as the legal and reputational risks inherent in the enterprise, compel us as fiduciaries to carefully consider whether holding these types of assets is prudent and in the best interest of City workers and retirees.”

Stringer’s statement seems to echo what activists have been saying for a long time. “The concept of asking pension funds to divest is a historical phenomenon that’s very justified,” said Bill Samuels, founder of EffectiveNY, a government watchdog group. Samuels is a part of EPIC, Credico’s advocacy group. He cited the state’s history of divestment movements, going back as early as the 1980s to protest apartheid in South Africa and the more recent push to divest from gun manufacturers and fossil fuels. “These types of issues have been present for decades,” Samuels said.

In the wake of the federal decision on private prisons, Samuels said it would be a logical move for the City to divest and one that is in line with “the most progressive city” in the nation. “If the President of the United States can speak out on it, then every government pension from Cleveland to California to New York City should speak out on it,” he said. “The president made a major decision. I would expect states or cities that haven’t done so to follow suit immediately.” He was charitable about Stringer’s role in the process, conceding that he couldn’t make the decision alone to divest as his state counterpart Tom DiNapoli did in October of last year.

The city’s leadership has in the past been trendsetters on divesting from increasingly unpopular companies or industries. Following the San Bernardino mass shooting in December of last year, when President Obama made a case for gun safety measures and limits on ownership of high-calibre assault weapons, Mayor Bill de Blasio submitted a resolution to the New York City Police Pension Fund to examine divestment from gun manufacturers. The mayor’s message was clear: the city should not be investing in an industry and product involved in “countless tragedies” across the country, and that the president’s executive action was “a turning point in the effort to end senseless acts of violence against Americans.”

De Blasio has criticized the private prison industry for years. When he was Public Advocate, he was a vocal opponent of the GEO Group’s practices at its Queens facility.

Current Public Advocate Letitia James, who sits on the board of the New York City Employee Retirement System, one of the five pension funds, said in a July 3 radio interview with Samuels that the city should divest from private prisons and that she was considering presenting a resolution to the board to that effect. She had also been behind the resolution to divest from gun retailers that the NYCERS board voted to approve in July.

Jamie Trinkle, campaign and research coordinator for Enlace, which coordinates a national private prison divestment campaign, said, “It’s pretty appalling when city governments invest the pensions of public employees into the future incarceration and detention of fellow residents and employees.” She pointed out that the DOJ announcement showed the fragility of these companies as far as the pension fund’s fiduciary priorities are concerned and that the time is ripe for them to divest their stake.

“The city should not be invested in the expansion of state and corporate control of communities of color, immigrants and the poor,” Trinkle said. “Instead they should be investing in community-based solutions that increase the wellbeing of these communities that have been most impacted by criminalization.”

In a letter sent on Monday, City Council Speaker Melissa Mark-Viverito urged the Department of Homeland Security to follow the DOJ’s example and stop contracting with private immigration detention facilities. When asked by Gotham Gazette if the speaker would support divestment from the same private prison firms that run these facilities, a spokesperson for the speaker said that her office hasn’t examined the issue closely but would be open to the idea.