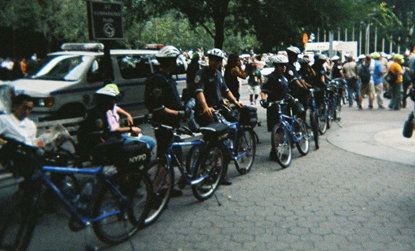 Photo (cc) Brendan Themes
The proposed First Amendment Assembly Act would be a reversal of some of
NYPD's 2003 RNC-related restrictions.

New York has long prided itself as a place of protest, where dissidents of all stripes could take to the streets and be heard. But over the past several years, the right to demonstrate has taken a beating here. Now some City Council members are seeking to reverse that trend.

The council members have proposed a measure that would significantly modify the New York Police Department's new regulations governing permits for parades and demonstrations. The First Amendment Assembly Act, Intro 743, reasserts the council's right to legislate in this area and seeks to make the police more accommodating in allowing protests, demonstrations and other gatherings in public spaces. The stated goal of the bill is to promote "fair and transparent accommodation of competing uses of city public spaces, which means to encourage First Amendment assemblies by de-criminalizing mere participation in, or proximity to, them."

As the bill's sponsors work to garner support for it, a court settlement was reached on a key case involving protest in the city. On April 15, the New York Civil Liberties Union settled a lawsuit with the Police Department. As part of the agreement, the police pledged not to send horses into crowds of demonstrators without providing warning and giving crowds the opportunity to disperse. The department said it would not create penned spaces that "become traps," according to a New York Civil Liberties Union release, and "to assure that protestors have the information that they need to get into demonstration areas."

The suit covered three cases, including the massive anti-war protest of February 2003 where demonstrators were denied the right to march past the United Nations and were confined to pens on side streets. The settlement finalizes a temporary order issued by federal Judge Robert Sweet in 2004 just prior to protests of the Republican National Convention, barring the police from certain restrictive practices.

Under the settlement, two demonstrators, who alleged police mistreatment during the 2003 anti-war protest, were awarded $10,000 and $15,000 respectively.

The City Council bill introduction is the latest move in a long debate that arose out of mass bike rides by the group Critical Mass. Rebuffed by the courts in its effort to restrict the rides under existing regulations, the police department tried in 2006 to create new ones. The rules would have required permits for any group of 20 or more using a public street or sidewalk. They would have also given the police the right to arrest two or more people or vehicles that failed to observe traffic rules for "parading without a permit" in addition to whatever traffic infraction they committed.

While Police Commissioner Ray Kelly claimed that the rules would "in no way impinge on free speech," the administration withdrew them after an uproar from the politicians, the press and civil liberties groups. The Association of the Bar of the City of New York wrote a 19-page report calling the regulations "critically flawed."

In January 2007, the police department issued modified regulations, obligating groups of 50 or more to obtain parade or demonstration permits. While Christopher Dunn of the New York Civil Liberties Union called the new regulations "an improvement," he told the New York Times, "we still do not believe that lawful bike rides, with as few as 50 bikes, should require police permits."

Police spokesman Paul Browne responded, "Some critics will find fault no matter how reasonably the rules are drawn."

City Council Speaker Christine Quinn embraced the new rules, the paper said, promising to "ensure we strike the proper balance between protection of civil liberties with the need for public order."

The council had felt the rules proposed in 2006 " were too restrictive," said Anthony Hogrebe, deputy press secretary for the speaker. "The NYPD made changes based on the concerns we expressed, and we have continued to monitor the new regulations to make sure that both civil liberties and public safety are being protected."

The modified regulations, however, remain unacceptable to many civil liberties groups. The group www.radicalhomosexualagenda.org Radical Homosexual Agenda (click on "Letter to Quinn") demonstrated against Quinn, who is herself an out lesbian and former community organizer, complaining, "These rules justify the police suppression of spontaneous crowds."

What the Bill Would Do

Councilmember Rosie Mendez and eight of her council colleagues have responded to these and other concerns by proposing the First Amendment Assembly Act. "Groups wishing to assemble and stay within the limits of the law should not be required to obtain a permit," Mendez said in a release. "The First Amendment is our permit. Larger assemblies that want the police to assist in managing traffic along their route and ensure security should be able to apply for a permit through a fair and transparent process. This bill sets forth clear guidelines for each instance."

The bill makes the application process easier and requires the police department to respond in a timely fashion to requests for permits. If it turns down a request, the department must provide written reasons for the rejection. The bill also recognizes that some demonstrations arise spontaneously in response to breaking news, leaving no time to obtain a permit. In such instances, "the department shall, consistent with the interests of public safety, seek to assist, facilitate, and otherwise encourage the rights of persons to organize and participate in [assemblies]."

These changes would mark a substantial change in emphasis on civil liberties in a city whose government sharply restricted anti-war demonstrations in 2003, has denied requests for large rallies in Central Park and rounded up people they thought might protest when the city hosted the Republican National Convention in 2004.

Mark Taylor of www.assembleforrights.org Assemble for Rights, a coalition of 22 groups working for this bill, said, "It is a big deal to us that the City Council make these regulations, not the police department."

The New York bill is modeled on a law adopted in 2004 in Washington, D.C., another city that is the scene of large demonstrations.

Civil rights attorney Gideon Oliver, who played a role in drafting the legislation, said, "the most important thing it does is that it decriminalizes 'parading without a permit' and points to best practices not just in Washington, D.C., but in other cities with large populations." He added, "It will provide the police department and other city agencies with the kind of information they need to police events."

Oliver said that a big part of what motivated Washington to write the law was all the money its government had to pay out in lawsuits brought by aggrieved demonstrators. "But Bloomberg doesn't care and the taxpayers don't seem to" here in New York, he said.

Washington's law, according to Taylor, is "very clear with their police department that unless there's violence or major disruption, their job is to facilitate public assemblies and work with organizers. The police are not allowed to wade in and make indiscriminate arrests as the New York Police Department has several times." Many of the arrests New York police made at the Republican National Convention were thrown out of court on that basis.

While New York's department is fully capable of being cooperative in policing gatherings, Taylor said, "sometimes they have a different approach based on the content of speech," such as when the action is against "police violence and corruption" or involves gay activists or people of color.

Last May, for example, police surrounded about three dozen young people on their way to a wake for a teenage friend. The teenagers were cursed at, handcuffed and thrown into police wagons, Bob Herbert reported in the Times "According to the police, the youngsters at the scene were on a rampage, yelling and blocking traffic. That does not seem to be the truth."

The First Amendment Assembly Act may be a heavy lift in a City Council where term-limited members with their eyes on higher office are loathe to be perceived as either anti-cop or as second-guessing their judgment. While many council members hold press conferences and attend rallies complaining about police misconduct or restrictions on civil liberties, few take the initiative to write new laws, such as this one, that address the problem in a more systemic fashion.

The bill has been referred to Council Member Peter Vallone Jr.'s Public Safety Committee and has not been given a hearing date. Neither the police department nor Mayor Michael Bloomberg's office would comment on the legislation.

"We've made it clear to the speaker that if she wants to be a good leader, she can't ignore civil liberties," Taylor said. "We know she has done good things as Speaker, but she can't take a pass on this."

Mendez said Quinn is well aware that Mendez has been developing this legislation and worked closely with the council's legal staff in drafting it. She plans to work on getting a lot more sponsors for the bill and will be asking for a meeting with Quinn on it. "She has to balance needs," Mendez said. "But I expect honesty from her and I know I will get it."