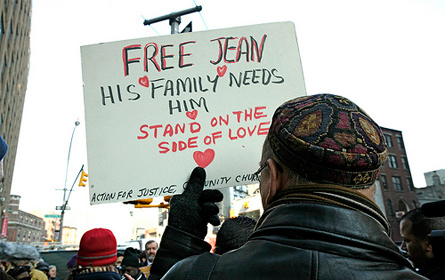 The campaign to free community activist Jean Montrevil, a native of Haiti, began on Dec. 30, 2009, the day he was taken into Immigration and Customs Enforcement custody during a routine check in and placed in the York County Prison in Pennsylvania. His detention sparked outrage among his supporters, resulting in the arrest of 19 people at a rally held to show solidarity with Montrevil and to protest what they deem are unfair immigration practices.

"These immigration laws destroy families and contradict the values we should uphold as a society," said Reverend Donna Schaper of Judson Memorial Church where Montrevil’s family worships. Schaper was among the 19 arrested. Montrevil's plight also caught the attention of several local politicians including U.S. Reps. Jerrold Nadler and Nydia Velasquez.

For now, though, Montrevil is free. On Jan. 23, after the government decided to halt all deportations to Haiti because of the earthquake there, he was released from the detention center.

His reprieve may be only temporary. And meanwhile, thousands of other immigrants still face deportation. As a result of the Illegal Immigration Reform and Immigrant Responsibility Act signed in 1996 by President Bill Clinton, many immigrants have either been deported or face the threat of deportation. The act, which was retroactive, added a number of new crimes to the list of deportable offenses, which originally included only serious crimes such as murder and drug trafficking.

A Rise in Deportations

From Oct. 1, 2008 through June 30, 2009, ICE deported or returned more than 271,200 aliens, a more than 18 percent increase than that of the same time period in the previous year. In 2008, ICE issued 168,800 charging documents to formally begin proceedings to remove criminal aliens from the United States.

Immigration advocates have protested these actions, arguing that deporting someone who has already been punished with imprisonment is unfair, particularly when the person has turned his or her life around. Angad Bhalla, an organizer with the New Sanctuary Coalition, which opposes deportations, echoed the sentiments expressed by many supporting Montrevil and others facing deportation: "He served his time. He has reformed himself. Our priorities are out of whack if we feel that those are the people to deport."

"Jean put a face on this issue," said Bhalla, who has known Montrevil for three years. He praised Montrevil for sharing his story with the public. "For some, the only chance for people to stay with their families is to hide," he said. "It’s rare that people will talk about what they’re going through."

Bhalla is particularly critical of the effect immigration laws have on children. "What gain is there in making orphans out of children and breaking up families?" he asked.

In a letter written before his release, Montrevil said that he saw his children's future as "bleak and very fragile." "We make promises to be there for them, to protect them and cherish them, I may not be able to do that for my babies," he said.

Supporters of the laws, though, say the country needs to control who can stay here. " There are more people that want to come here than there are openings," said Bob Dane of the Federation for American Immigration Reform. "You got to keep your nose clean if you want to stay here."

As for Montrevil, Dane said, "He tossed his chance away. â€¦ He used a slot that someone else could have used and what did he do? He spent his time in jail."

John Vinson of the American Immigration Control Foundation said that, while Montrevil might have deserved his reprieve, the deportation procedures are necessary. "We can show compassion in some cases, but if we don't enforce the law for the most part, we're courting chaos," Vinson said.

Montrevil's problems date back to a fateful decision made over 20 years ago. Montrevil, who legally arrived in Brooklyn as a teenager in 1986, was arrested for selling cocaine, an aggravated felony, in Virginia in 1989 and served 11 years in. While Montrevil was incarcerated, the Immigration and Naturalization Service initiated deportation proceedings against him, and in 1994, he was ordered deported.

They never followed up on that though, and in 2000, Montrevil left prison under supervised parole. Five years later, though, during a routine check-in at his parole office in Brooklyn, Immigration and Customs Enforcement, officials took Montrevil into custody and he spent over six months in detention facilities.

At the time, Haiti was deemed politically unstable and as a result, Montrevil was not repatriated. Instead, he was released and ordered to appear at ICE headquarters once per month. Montrevil started his family, marrying a teacher. He also established a van service, became active in his church and co-founded the New Sanctuary Coalition. All that, though, seemed to be in jeopardy when he was detained last month.

Trinidadian immigrant Ravi Ragbir also is fighting deportation. He said he believes the current immigration laws reflect a "just get rid of them attitude."

"They are inhumane. They are oppressive. I hate them," he said.

Ragbir, who arrived in the United States 20 years ago was charged and convicted of fraud and served two and a half years at a federal prison -- charges Ragbir denies. He also served two years at various detention centers within regular penitentiaries. Though detained for immigration matters, Ragbir says that he had to follow the same rules other prisoners, including violent offenders, followed.

Ragbir, who now lives with his daughter and his former wife, said his experience "emotionally traumatized" his daughter who saw him in shackles during a court proceeding. "She didn’t want to touch me. It was traumatic for her and myself," he said. "I told her mom not to come back and see me. 'Don't bring her. It's better that she doesn't see me through this process.'"

Ragbir is "certain" that he suffers from Post Traumatic Stress Disorder and attributes this to his time spent in detention centers as well as to the unsettling feeling of not knowing what his fate is. "How can I build there, when there is nothing there?" he says about the possibility of having to resettle in Trinidad. He says that moving to Trinidad would be particularly hard on his daughter, whom he describes as an American.

For his part, Montrevil reflects on the strange turn his case has taken. At the celebration service at the Judson Memorial Church on Washington Square, Montrevil said he was scheduled to depart for Haiti on Jan. 6. However, the flight was canceled when another Haitian scheduled to be on the plane came down with the swine flu and dozens, including Montrevil, were quarantined for seven days.

Then the earthquake hit. "I couldn't believe it. I was thinking how I could have been down there, I could have passed away. There are 111,000 people dead, 2 million people homeless, and they say there are still many people trapped under building debris. I kept thinking, I was supposed to be there on Jan. 6," he said.

Montrevil still is not sure he will be allowed to remain in the United States. Even though Janet Napolitano, secretary of the Department of Homeland Security, granted Temporary Protected Status to eligible Haitian nationals, giving them an 18-month time period to live and work in the United States, Montrevil will not qualify because of his felony conviction. He has instead applied for "deferred action" with ICE for the past three years, which would, in effect, have his case put in the bottom of the stack, so his pending deportation orders would not be immediately enforced. ICE has not agreed to his request.