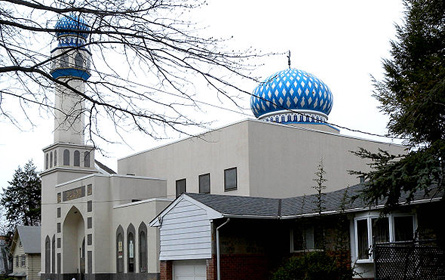 "Allah Akbar, Allah Akbar, Allah Akbar," yelled Mayor Ed Koch in Arabic on an exciting day for New York’s Muslim community in 1987. With his shout (which means "God is great") Koch was present to celebrate the construction of the first mosque in New York City built from the ground up -- the Islamic Cultural Center of New York on Riverside Drive.

Back then, the only significant obstacle to the mosque's creation were funding problems, changing plans and internal feuding, all of which were eventually resolved.

Much, though, has changed in the past two decades. Now challenges to new mosques in New York City have grown to include some fresh problems, as the proponents of a new mosque in Sheepshead Bay have learned.

The proposed mosque, which does not yet have a name, has received the criticism that faces any establishment that tries to plant itself in a residential neighborhood: worries about parking problems, noise and the effect on property values. In the diverse waterfront Brooklyn community, the proposal to build a mosque also has become ensnared in allegations of bigotry on both sides, concerns about terrorism and debates about the Middle East. While the dispute there is the most heated in the city so far, it comes at a time when some other mosques in the metropolitan area have received increased scrutiny.

There are over 140 mosques in New York City alone, and since Sept. 2001, attitudes toward mosque building in New York City and Long Island have been mixed. In 2008, Temple Israel of Jamaica, then located in Holliswood, Queens, peacefully became the Bait-Uz-Zafar mosque. Due to a decrease in the number of conservative and reform Jewish congregations, the synagogue shifted hands with local Muslims of the Ahmadiyya sect to accommodate their growing numbers. Clergy members from several religious groups along with local politicians held a ceremony to mark the transformation from Jewish temple to Muslim mosque.

The Long Island Muslim Society, located in the quiet, suburban town of East Meadow, was at the center of attention in 2002 when it wanted to convert two homes that it used as its headquarters into a traditional mosque and school. The construction plans drew protests from some residents who complained about increased traffic and parking problems. The mosque received a permit to build the structure in 2007 after a long struggle.

The Parkchester Jame Masjidin 2009 became the first mosque in the Bronx to ask permission to use electronic amplification to perform the Muslim call to prayer, the "adhan." The adhan, which lasts for less than two minutes, is supposed to sound five times a day to call worshippers to pray, but mosque officials agreed to request permission to air the adhan only four times a day, skipping the early morning call. The mosque rescinded its request for the permit back in November when mosque leaders flew to Mecca to make the hajj pilgrimage but are once again seeking permission for its use.

The Cordoba Institute has purchased an abandoned building two blocks away from Ground Zero and plans to turn it into an Islamic center. Formerly leased to the Burlington Coat Factory, the building now used to accommodate the overflow of worshippers from Al-Farah mosque in Tribeca,. According to an articlein the New York Times, Mayor Bloomberg’s spokesperson Andrew Brent has said, "If it's legal, the building owners have a right to do what they want."

Not everyone agrees. Some opponents of the mosque have started a website called No Mosques at Ground Zero. It demands that Bloomberg "honor those murdered on Sept. 11, 2001 by not permitting a mosque to be built on Ground Zero." The creators of the website did not answer requests to be interviewed for this story.

Some elected officials are not shy about expressing their own negative views of Muslims and mosques. In 2007, Republican Rep. Peter King of Long Island said in an interview with Politico.com, "We have, unfortunately, too many mosques in this country. I'm aware of ones in New York. To me, they certainly raise suspicion, they should be looked at carefully." On another occasion, he referred to Muslims as "an enemy living amongst us."

And Koch, who appeared to have given his blessings for the construction of the Islamic Cultural Center 23 years ago, recently said on Neil Cavuto's show on Fox News that "hundreds of millions of Muslims are terrorists."

New York City is home to over 600,000 Muslims, according to a study by Columbia University. The Association of Religion Data Archives found, that, as of the year 2000, there were nearly 58,000 Muslims living in Brooklyn, many of whom live in Bay Ridge, Coney Island and near the western part of Atlantic Avenue. There are over 28 mosques in Brooklyn alone.

The vacant lot on 2812 Voorhies Ave, has been purchased by Allowey Ahmed, a Yemeni-American who has lived in Brooklyn for over 40 years, in partnership, with the Muslim American Society. The new mosque will be four stories high and will house a community center as well as classrooms.

When Ahmed submitted plans for the mosque’s construction to the Department of Buildings in July 2009, it called for a minaret. His proposal was rejected but he submitted a second plan, and is now proceeding with construction of the mosque without the minaret. In an article on Sheepsheadbites.com, Ken Lazar, the Department of Building's community affairs liaison, said that religious institutions may build "as of right" so long as they fit in with zoning regulations.

The Muslim American Society has accused some residents of bigotry against Muslims.

A group called The Bay People has distributed leaflets urging people to "Say NO to mosque at 2812 Voorhies Avenue." A petition against the mosque's construction has made its way onto the Internet. The petition charges that the Muslim American Society has associations with organizations and individuals that espouse anti-Semitic views, and that it supports terrorist groups, encourages suicide bombings and rejects Israel’s right to exist. So far, 293 people have signed the petition.

In particular, critics have targeted Mahdi Bray, executive director of the Muslim American Society's Freedom Foundation and an outspoken critic of Israeli policies.

The Muslim American Society denies it has ties to terrorists or anti-Semites. Theresa Scavo, chair of Community Board 15, has called the creators of the flier ignorant people who understand neither the spirit nor the letter of American law guaranteeing freedom of religion.

At a January civic association meeting, Scavo reportedly saidthat those opposed to the mosque might have a better chance if they stuck to issues such as parking and traffic. "If you want to succeed, do not use the word mosque. Do not use the word Muslim. Request the traffic reports. Go take photos of the double parking at the other mosques during calls to prayer. Have [the opponent] done that? No. Because they’re lazy. You can’t just go with your mouth. You need paper,” she said.

The City Councilmember from the area , Lewis Fidler, has defended the mosque, saying "To make a decision that because this is a mosque and for no other reason that this will be a haven for hate or terror is over the top."

At a recent Community Board meeting, Sheepshead Bay residents -- including some who support the mosque and others who oppose it -- packed a large room at Kingsborough Community College. Though discussion of the mosque was not on the meeting’s agenda, the board allowed concerned residents to speak.

One Muslim man said at the community board meeting that the Muslims of Sheepshead Bay do not have a place of worship within walking distance and thus have to travel to worship. "I am sorry to hear what our neighbors are saying, it really hurt. We would like to worship God the same way like everyone else does, according to their own concept of God. This should not be too much to ask in these United States of America."

A resident named Stephanie who called herself a “Sweda-Rican” spoke against the mosque, eliciting several rounds of applause from the audience. "What troubled me most about this was portraying people who don’t think this mosque is a good idea as racist. I am not a racist."

"We have a good reason for our concern. It is simply rational fear. We must be honest," the woman said.

Mohammed Razvi, a Pakistani who founded of the Council of Peoples Organization and is co-founder of the We Are All Brooklyn coalition, urged all residents of the neighborhood to unite. "We should all come together to address those concerns. It's everyone's community," he said to the crowd calmly. "Brooklyn is an example of how peace can be achieved throughout the state, throughout the world. Please uphold that"

"My neighborhood will die," complains Greg Kalman in a thick Russian accent.

Kalman represents The Bay People. He said he is concerned about a decrease in parking in the area and thinks that property values will drop because if the mosque opens and result in an exodus of homeowners out of Sheepshead Bay.

In a telephone interview, Kalman said that he was frightened that tenets of radical Islam will be taught in the mosque. Kalman, who is Jewish, immigrated to the United States from Azerbaijan, a Muslim country in Central Asia carved out of the Soviet Union. Though he says he never had any problems with his Muslim neighbors in his home country or in Sheepshead Bay, he is still wary. "I put a menorah on my window during Hanukkah," he said. "I don't know if someone will come in and break my window."

"I am not a racist," he insisted. "I don’t think that the majority of Muslims are radicalized, but there is the possibility that a small percentage can become radicalized. People are afraid."

He also accused the Muslim community of Sheepshead Bay of being too insular. "I talk to the Italians, the Russians, but the Muslims don’t talk to anybody," he said.

To bolster his charge that the mosque backs the Palestinian group Hamas, Kalman cites a 2000 video of Mahdi Bray attending a demonstration in Lafayette Park in Washington D.C. In the clip, Bray nods and raises his hand as the speaker asks the audience whether anyone is a supporter of Hamas, which governs Gaza. The U.S. government classifies Hamas as a terrorist organization, but some nations, including the United Kingdom and Australia, only consider Hamas' military wing as a terrorist organization.

An outspoken critic of American foreign policy in the Middle East, Bray denies that he harbors any prejudice against Jews and said his work with interfaith organizations is testament to this, "I reject the idea that criticism of Israel makes you an anti-Semite," he said.

Bray also disputes a statement on the online petition saying that the Muslim American Society "has a troubling history of associations with radical organizations and individuals that promote terrorism." He said that the society has developed youth programs to steer youngsters away from the path of religious radicalism.

While Bray urged mosque officials to try to address all the concerns of the community and accommodate their needs, he thinks that complaints about parking, noise and property values are "pretexts" for simply not wanting a mosque. "Those are not the major issues," he said.

An online petition in favor of the proposed mosque has made its appearance on the Internet as well. That petition has so far gathered 583 signatures of support.

"We are the new kids on the block," Bray said of Muslim Americans. "We are going to build this mosque and we don't have to apologize for anything. Let the bigots scream."