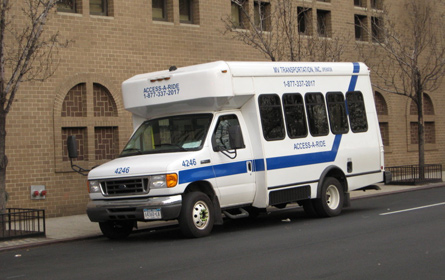 After work, Milagros Franco wheels home in her motorized chair across the 2Â˝-mile pedestrian walkway of the Brooklyn Bridge and then waits for a bus to her Manhattan apartment. "It saves time," Franco said. But she depends on an Access-A-Ridevan to get to work every morning, again, because that too saves time.

Now, though Franco worries that the Metropolitan Transportation Authority's proposed cuts to Access-A-Ride could triple the time it takes her to commute to her job at the Brooklyn Center for Independence of the Disabled.

Access-A-Ride, the New York City Transit's service for people whose disabilities prevent them from using regular mass transit, now carries vans full of passengers door to door. Everyone is picked up at their home or office and then taken to their individual destinations. Under the service changes prepared by the Metropolitan Transportation Authority, some passengers, instead of being taken directly to their destination, would be driven by the van to a bus, subway station or to another Access-A-Ride van.

The MTA also proposes to make access to Access-A-Ride dependent on weather conditions, so that service would change day-to-day and has proposed a number of other changes.

Spokespeople from disability groups charge that the cuts would add hours to a client's commute, making Access-A-Ride almost worthless. They say a trip that would take 15 minutes by a bus or subway now can last two hours on Access-A-Ride. The proposed service changes, they say, would add another two or three hours to the round trip, leaving many people with disabilities stuck in isolation in their homes.

The City Council will holding a public hearing on Access-A-Ride cuts on Tuesday at 1 p.m. at City Hall.

While some people with disabilities can and do use mass transit, approximately 20,000 people use Access-A-Ride every week. The program costs more than $451 million a year, and the MTA sees its proposed $40 million in cuts to Access-A -Ride as necessary to help alleviate the system-wide budget deficit of more than $750 million, according to Aaron Donovan, a spokesperson for the authority. The MTA has proposed an array of cuts including eliminating the free and reduced subway rides for students.

Metropolitan Transportation Authority chief Jay Walder has conceded that many of the reductions will be painful. "It's tearing my heart out right now," Walder said at a hearing earlier this month, "Last night at 1 o'clock in the morning I'm turning over in bed trying to figure out how to make the choices."

The MTA also has recommended applying more rigorous eligibility criteria for using Access-A-Ride, transferring more overnight service to taxis and other car services, making it more efficient and reducing personnel. The reduction in direct service, though, most alarms advocates.

Being driven to a bus or subway stop for part of the trip "would really discourage people with disabilities from going anywhere,” says Linda Ostreicher, director of public policy for the Center for the Independence of the Disabled, New York, a non-profit advocacy and support group. "Access-A-Ride is not able to keep a schedule, is not reliable now. Imagine waiting at home for an Access A Ride vehicle, getting dropped off at a bus stop, waiting for the bus, getting off the bus, and waiting for another Access-A Ride to get to your doctor's office on a day that you feel sick. Then imagine doing the whole thing again on the way home," Ostreicher said.

Evaluating every trip by weather conditions would be "time consuming and complicated," Ostreicher said. "It would require increased staffing, additional training and upgrading the current scheduling systems," and that, she believes, would wipe out any cost savings.

Advocates remain unclear how the transit authority would determine how weather conditions affect an individual's ability to travel on a given day. Many disabilities cause symptoms that vary from day to day, sometimes hour to hour. For example, some people with multiple sclerosis can experience heat intolerance that can cause decreased cognitive function, numbness, fatigue, blurred vision, tremor and weakness. For some people with cerebral palsy, cold can cause a tightening of extremities that makes it difficult to walk. Weather conditions like snow, ice and slush and rain create obvious problems for people in wheelchairs. Bad weather also makes it more difficult for people with low vision and blindness to navigate their path.

Franco said the cuts could affect her dramatically. Now, she takes a 7:45 a.m. Access-A-Ride van to her Brooklyn office, a 10 to 15 minute trip that gets her to her office one hour early.

The commute home is a completely different story. "Either Access-A-Ride doesn't show up, or they show up three hours later â€¦ or they may take a joy ride through the boroughs." Because the two wheelchair-accessible seats on the regular bus usually are already occupied by the time Franco would get on, she generally opts to wheel herself across the bridge.

"You gotta do what you gotta do to live," said Franco. She has had cerebral palsy since birth and has been wheeling across the bridge since attending Long Island University where she earned a bachelor's degree in social work.

On a bad weather day, though, she can't wheel. So she takes Access-A-Ride home on those days. "I can see that if I was subject to the service changes it would take so much time to get to and from work that I would not be able to keep my job. Both my clients and I would be stuck at home. I want to be an active participant in society. I want to help other disabled people," Franco said.

A numbers of local officials, including City Council Speaker Christine Quinn, council Transportation Committee chair James Vacca and other council members oppose many of the MTA's planned cuts. They say the reductions can be averted or reduced by reallocating federal stimulus funds and using capital money for operating costs.

"If these changes go into effect, the mass transit system would not be in compliance with the mandates of the Americans with Disabilities Act," Vacca said. The act makes it a violation of civil rights law for public transportation agencies, such as the Metropolitan Transportation Authority, to discriminate against people with disabilities in providing service. As part of that, the agency must make good faith efforts to operate accessible buses, subways and trains and, in cases where that would result in an "undue burden" to provide paratransit, such as Access-a-Ride.

Obstacles in the System

New York's transit system presents a number of barriers to people with disabilities. While the bus system is 100 percent wheelchair accessible, riders say there are not enough buses to meet demand. And subway and taxi service are not accessible for the majority of New York's disabled.

Service changes could also strand clients with other physical disabilities, infirmities due to age, those with cognitive disabilities that make it difficult for them to remember bus routes and directions, some people with certain psychiatric disabilities, and some people who are hearing-impaired.

Only 70 of some 470 subways station are accessible, according to James Weisman, counsel to the United Spinal Association, a disability rights and veterans service organization.

The others pose various obstacles. Some feature a six to eight-inch gap between the platform and the train. "For people with physical disabilities and the blind, the fear of being dragged by the train is an anxiety that deters its use," Ostreicher said.

Elevators frequently do not work. And for some trips, elevators exist on the downtown trip but not the uptown trip or vice versa. A broken elevator can present a disabled person with a major problem. Weisman explains, "If a passenger arrives at a station where the elevator is out of service, they have to travel to the next accessible station in the direction they don't want to go, go back and re-board a train in the opposite direction and come out on the other side of their original station."

The Metropolitan Transportation Authority says that its 110 accessible subway and commuter rail stations have, among other features, elevators or ramps, large-print and tactile-Braille signs, audio visual information systems, telephones at an accessible height with volume control, and text telephones.

Cabs and Buses for All

Access-A-Ride costs the MTA $66 a trip. The rider pays $2.25 each way. In light of that, some advocates believe the transportation authority and the city government should look for less expensive alternatives that would still give people with disabilities the mobility they need.< For example, Weisman notes, if buses were not accessible, the additional Access-A-Ride van trips would cost the authority an additional $79 million a year.

More accessible taxicabs could also reduce Access-A-Ride trips. The spinal association supports MV-1, billed as the world’s first mobility vehicle. With production slated to begin in October, the taxi meets the guidelines of the Americans with Disabilities Act, without requiring conversions or retrofits. It can accommodate even power wheelchairs and scooters and up to five other adults. Power wheelchairs will board the taxi by driving up the ramp. Manual chairs will be pushed in by the driver. The wheelchair using passenger sits next to the driver in the front seat which is empty space where a wheel chair can be secured.' It would operate by both dispatch and flagging and would be accessible to everyone. They will begin to be manufactured.

If a sufficient number of MV-1 taxis roamed city streets, paratransit riders could get a debit or credit swipe-card and pay $2.25 for a cab ride with the Access-A-Ride system making up the difference. The MTA would still come out ahead.

"Even the longest taxi rides are less than half the cost of paratransit rides," Weisman said.

State Assemblymember Micah Z. Kellner, Assembly member, proposed the swipe-card system back in 2009. He estimated then that it could save taxpayers $50 million a year in paratransit services â€“ $10 million more than the Metropolitan Transportation Authority Says it must cut from the Access-A â€“Ride budget.