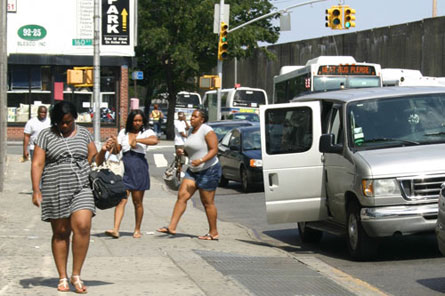 Eric Simit, a Jamaican immigrant, has been driving private commuter vans, most commonly known as "dollar vans," for 15 years in western Queens. He works six days a week -- from morning rush hour to the end of the evening commute, charging $2 a ride.

It's harder to make a profit lately, Simit says, as more vans hit the pavement. With little enforcement, many have found driving a “dollar van” an easy alternative to unemployment.

"It is the fastest way to make money fast," he said.

But Simit, other van drivers and their fast-cash business are becoming a more formal means of transport. In what Baruch College Professor E.S. Savas calls "privatization by default," Mayor Michael Bloomberg with the Taxi and Limousine Commission announced a yearlong pilot program in June, which allows vans to run on the discontinued B23, B71, B39, Q74 and Q79 routes. The target start date is Monday.

Faced with an $800 million deficit, Metropolitan Transportation Authority cut these five Brooklyn and Queens routes, along with several others, earlier this summer, because they were money pits. While the MTA could not break even on the routes despite large tax subsidies, immigrant entrepreneurs like Simit hope to operate vans along them and make a profit.

All five routes cost the authority over $4 per rider -- the Q79 was the highest at $8.08. The vans will charge $2 a ride. Vans save on expenses by escaping the high labor costs, American Disability Act requirements and environmental standards that face the transportation authority.

Supporters of the program, including Transportation Alternatives, see the private vans as the best, if not the only way, to serve city neighborhoods in a time of decreased resources and rising costs. But critics see a creeping privatization of transportation that means less service, lower wages and more pollution.

Dollar vans have a proven record of operating at the fraction of the cost of the Metropolitan Transportation Authority. While less than 300 vans are licensed, thousands operate unauthorized across the city. Most vans illegally shadow city routes and undercut the authority's fare of $2.25, charging only $2.

The Taxi and Limousine Commission plans to have clearly marked vans that seat up to 20 passengers on the road by Monday. Currently, they are evaluating over 20 bids. For each route, prospective companies have outlined the frequency and hours of service, plus a list of stops. The commission will choose the companies which best serve the community, but riders should not expect the same service as the MTA.

“This is not a replacement of the MTA,” says an agency spokesperson.

If the program is successful, the administration plans to expand it.

Transit Workers United Local 100, the union representing many laid off bus workers, seeks to block the program. They have filed a lawsuit, claiming the commission has illegally created a “substitute transportation system” in “essence replicating the bus service” of the five routes. The union says they expect a ruling by the end of this week.

The TWU calls the pilot plan “a backdoor way to cut bus service.” (Ironically, the vans first emerged during the 1980 transit strike when West Indian immigrants began picking up stranded commuters in Brooklyn and Queens. After the strike, dollar vans remained, and again played roles in the MTA Strike and Green Bus strikes of 2005.)

A Taxi and Limousine Commission spokesperson claims the vans differ from the discontinued buses in that "drivers have specific stops but not a set route." Drivers can negotiate stops with passengers and change routes to avoid traffic. Taxi Commissioner David Yassky insists that the program is not a form of privatization. He says the agency’s “commitment to the MTA as the provider of public transportation is absolute.”

But suspicion by critics -- like the TWU -- that the plan is a form of deliberate privatization isn’t easily dismissed. The program was announced as Deputy Mayor Stephen Goldsmith takes his post at City Hall. Goldsmith, the former mayor of Indianapolis, briefly privatized public buses during his tenure. He is also chairman emeritus of the Manhattan Institute, a group that has promoted the competitive contracting of New York City transportation.

Despite the Taxi and Limousine Commission's claim that turning over bus routes to livery vans is just “to fill in the service gaps,” the idea far predates the recent cuts. A 1992 MTA report floated the idea of abandoning bus routes in favor of vans in some areas. Later Mayor Rudolph Giuliani pushed the City Council to loosen van restrictions. For Giuliani the vans were "American success stories" of immigrant entrepreneurs adding needed competition to the MTA.

But already the MTA had estimated vans reduced revenue on some routes by 15 percent. In response to so-called union pressure, the City Council limited the number of commuter van permits and placed heavy restrictions on pick ups -- citing the vans' reputation for aggressive driving and the vulnerability of MTA funding and jobs.

But where the City Council once saw a threat, they now see opportunity. Several council members including Speaker Christine Quinn support the pilot program.

Reductions in labor costs enable the dollar vans to keep running when city buses cannot. A 1995 report commissioned by the US Department of Transportation found that economic benefits are sacrificed if “labor costs are effectively locked in from one provider to the next.” This means the key for dollar vans to operate at a lower cost than the MTA is to pay workers less.

Despite that, many people are eager to drive the vans.

Gregory McDowell was one of them. He is the owner and sole driver for the one van company, Guymack. As he waited for his van to load on a 90-degree day, McDowell, his flowered patterned shirt half unbuttoned, explained the economics of running a dollar van: "$550 every two years for the permit from the TLC. â€¦ $9,000 to $10,000 a year for insurance," he said. (A customer interrupted him complaining of the heat. "I’ll open the back door,” he responded, not offering to turn on the AC.)

McDowell works five days a week, driving about ten round trips a day mimicking the Q4 bus route. Sometimes the van is full. Sometimes it's less than half occupied. On his better days McDowell says he takes 160 passengers.

Drivers can make up to $40,000 a year, said another driver, Milton Brown. But those earnings are never guaranteed.

Alternatively, wages and ballooning pensions have often been a subject of criticism at the MTA (Former parks Commissioner Henry Stern opined recently that the MTA suffers fiscal problems because they are “incapable of containing their labor costs.").While MTA drivers earn more than $60,000 a year with generous benefits, little is known about van drivers' wages even amongst their biggest advocates.

Brown, a Q111 van driver, owns, maintains and fuels his van but works under a company. He paid his boss an initial fee of $2,000 plus $50 a week to use a van permit. If he didn’t have a van, he could rent one from the company for $550 a week. Brown says his earnings vary. During the school year he pockets over $500 a week without any benefits; during the summer he makes less.

Sure the vans are cheaper -- both Brown and McDowell drive Ford Econolines, which cost them about $30,000, a fraction of the MTA’s hybrid-electric buses that go for over a half a million dollars.

But some say they come with an environmental and quality of life cost. For instance, MTA buses are environmentally and disability friendly.

While New York reverts back to the dollar vans, cities like Bogota to Jakarta have won praise for replacing fleets of informal private mini-buses with a system of eco-friendly public buses.

Now riders accustomed to hybrid buses will be picked up by less green, older vans. Mary Barber, a managing director at the Environmental Defense Fund, says they would prefer that the MTA buses remain fully funded, since “the more people you can carry on a vehicle with cleaner fuel, the better.” The TLC has not required vans to meet any special green standards or be handicap accessible.

In addition to reducing labor and capital costs, the dollar vans will also offer less service than the MTA. While city buses may run empty during off peak hours, few dollar vans operate late at night and in the middle of the day. “I prefer the rush hour in the morning and the evening. Midday is break time,” McDowell said.

Also dollar vans do not take unlimited metro cards, reduced fare cards or accept or give transfers. The MTA says only 14 percent of fares are the full $2.25. So while savings will be had by the city, many riders’ pockets will be hit harder.

Bloomberg dismissed such concerns at a press conference saying, “The issue here is not whether it’s more expensive or less expensive; it’s whether the service exists or not.”

UPDATE: The Wall Street Journal reports the TWU has won a bid to run vans on the B71 bus route. Still a judge is set to rule on the union's suit against the pilot program. Also the TLC has delayed the program's start date until September.

Andrew Silverstein is a freelance writer based in Queens.