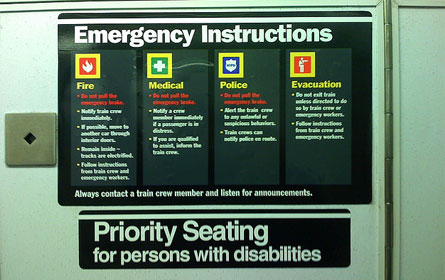 Last month, advocates for the city's disabled filed suit against the Metropolitan Transportation Authority for failure to adhere to requirements of the federal Americans with Disabilities Act while making renovations at Manhattan's Dyckman Street station on the Number 1 subway line. The groups claim the authority violated the act by not allocating 20 percent of the project's budget for improvements in accessibility, including the installation of ramps or elevators. Renovation costs are projected to be about $20 million.

For many activists, this failure is the latest in a long history of discrimination by the MTA and the city -- discrimination that makes it difficult for many New Yorkers to travel throughout their city. According to the suit, whose plaintiffs include the United Spinal Association and Disability Rights Advocates, only 86 -- or 18.5 percent -- of all subway stations are accessible to people with disabilities. That leaves 382 inaccessible.

"It is an absolute disgrace that 20 years after the ADA was passed, more than 80 percent of the subway stations in New York are inaccessible,” Julie Pinovar, an attorney for Disability Rights Advocates, said in a press release. While the agency has "no duty to put elevators everywhere," Pinovar said in an interview, "incremental access such as ramps to Metrocard machines would help.

Beyond subway station access, disability advocates fault the transportation authority for relying too much on -- and then cutting-- the Access-a-Ride program, the city's paratransit service. As for the city, they say it has not done enough to encourage, if not compel, taxi cabs to be accessible for riders in wheelchairs and others with physical handicaps.

Getting to the Platform

The issue of subway access has a long history, dating back even before the Americans with Disabilities Act passed in 1990. The United Spinal Association -- then known as the Eastern Paralyzed Veterans Association -- first sued the Transit Authority in 1979. An agreement was reached in 1984 to make 100 "key" stations fully accessible by 2020. Currently, the MTA is ahead of schedule with 89 -- instead of the planned 67 -- completed in that time frame, according to Deirdre Parker, MTA press liaison. More than 110 MTA stations meet the requirements of the disabilities act. All MTA buses can accommodate wheelchairs and other mobility devices.

Many of these stations, Parker said in an e-mail, are equipped with AutoGate, "an automatic entry/exit gate that allows customers who have ambulatory disabilities ... to enter and exit the subway system." She said some stations that are not accessible also have these gates to help customers who are accompanied by service animals.

Advocates, though, do not think the transit authority deserves much praise for these efforts. For one thing, they say, some stations are only partly accessible. A given station may have an elevator from the street to the mezzanine level but not to the subway platform, or from a platform to the mezzanine but not to the street. In these cases, accessibility becomes a cruel joke. There are countless examples of wheelchair-bound riders having to call 911 and being carried by firefighters or emergency medical technicians just to exit the system.

Stations considered accessible become instantly inaccessible to many disabled people when the elevator goes out of service -- something advocates and others say happens all too frequently.

In 2006, Manhattan Borough President Scott Stringer’s office released a report on the MTA's shabby record of keeping the system's elevators and escalators in working order. Entitled "State of Repairs," the report details the authority's failure to comply with city law mandating elevators and escalators be inspected and tested a minimum of five times every two years. It found an average of 78 percent of elevators in Manhattan did not receive a mandated inspection each year between 2002 and 2005. For elevators in ADA-compliant stations, an average of 74 percent did not receive a mandated inspection. For escalators, that figure was 58 percent.

In 2007, the MTA began posting a list of broken elevators and escalators on its website to help users better plan their travel.

City Comptroller John Liu’s office released an audit of elevator and escalator repairsearlier this year, which revealed among other findings, "More than one fourth (27 percent) of the required preventive maintenance assignment for the test periods reviewed were not performed; scheduled maintenance system work is not constantly performed; five-year safety tests were lacking or not properly performed."

Regardless of the number of accessible stations, advocates believe the transit authority should take advantage of projects, such as the one at Dyckman Street, to bring stations into compliance. James Weisman, general counsel for the United Spinal Association, called the renovation an "opportunity overlooked."

For the disabled, "the station is a transit waste land if you can’t climb the stairs, " Edith Prentiss, vice president of legislative affairs for Disabled In Action of Metropolitan New York and co-chair of the Taxis For All Campaign, wrote in an email.

"There are no buses on Dyckman," complained Prentiss, who uses a wheelchair and lives in the neighborhood. "The only accessible place to fill a MetroCard is the 207th Street A train on Broadway. MetroCard vans and buses are not accessible, either."

The MTA won’t comment on pending litigation, but said its plans for Dyckman Street include:

The class-action suit has been filed in federal court for the Southern District of New York.

This is not the only legal action on disabled access confronting the transportation authority. In August, several disability-rights groups including Disabled in Action of Metropolitan New York and Brooklyn Center for the Independence of the Disabled sued the MTA, alleging its budget cuts disproportionately affected the disabled and elderly and violated a different provision of the disabilities act. Those cuts eliminated 89 bus lines -- particularly routes traveling between boroughs -- and slashed service on Access-a-Ride. Additional cuts eliminating station agents have also been points of contention, since riders can become stranded.

Access-A-Ride has long been controversial, both within the disabled community and between the disabled and the transit authority. Some fault the MTA for relying too much on paratransit, instead of upgrading its subway stations.

Weisman, who was involved in the 1979 lawsuit, said the MTA made an "unfortunate choice and believed the hype [about] paratransit being cheaper than an accessible system."

According to Weisman, transit officials believed Access-a-Ride would only cost $9 million a year, but that figure has now ballooned to $450 million. Disabled riders made 5.8 million trips on Access-A-Ride in 2008. Each Access-A-Ride costs the authority about $66, but riders pay only the standard transit fare. The cuts aim to reduce the number of trips by about 26,000.

Echoing Weisman, Prentiss said, "the MTA made a stupid decision in the 1980s when ... they [were] foolishly relegating people with disabilities to Access-A-Ride, not realizing how the cost would grow over the years if they didn't do more than make buses accessible. For years, bus lifts were as unreliable as subway elevators are today."

The city Taxis & Limousine Commission authorized dollar van services to replace five of the eliminated bus routes, but they are not necessarily equipped with wheelchair lifts. Because of this, groups representing the disabled just filed another lawsuit in federal court, this time against the taxi commission.

Challenging the basis for that suit, commission spokesperson Allan Fromberg wrote in an email, "We've made many public statements to the effect that these vans were never meant to replace the bus lines and in fact could not have possibly done so." Two of the van lines have already been discontinued due to lack of demand.

Some disabled riders feel shut out of traditional taxis as well. Last year's Taxi for Tomorrow Request for Proposal created quite a stir because accessibility was seen as "desirable and not mandatory," said Weisman. Taxi commissioner David "Yassky is a huge problem; [he's] not committed to accessibility." Further, he said, the TLC operates "in a vacuum'' rather than coordinating with the MTA.

Fromberg, though said in an email that the commission does consider accessibility important. "The Taxi of Tomorrow request for proposal covers accessibility," he said, with language about “transfer from the curb to the car” and wheelchair accessibility.

"In every interview or public mention that I can think of, accessibility has always received equal billing to environmental aspects," Fromberg wrote. “I should also mention that the TLC has included the disability community and advocates in the process from the very beginning, which is consistent with our commitment to maximum accessibility.”

Currently, only 240 cabs out of the more than 13,000 in the city can accommodate wheelchairs. This, Fromberg pointed out, is “more than any other city in the nation" -- not surprisingly since New York also has more cabs of all types than any other U.S. city. Manhattan Assembly member Micah Kellner has proposed legislation that would require any new taxis in the city be accessible to people with disabilities.

The taxi commission recently admitted that a two-year $1million dispatch service for wheelchair users was a failure because it was underutilized. While not disputing that, Weisman has pointed out there was no marketing to people with disabilities and the program expected taxi drivers to travel, sometimes covering long distances, to pick up passengers. They did not receive any additional fee for the service.

In general, though, Weisman said, the taxi commission maintains that neither the vans nor the taxi fleet are subject to Americans with Disabilities Act rules because the city does not operate them -- third parties do. "The ADA specifically exempts TLC-regulated industries from accessibility requirements," Fromberg wrote. "There are no compliance issues.”

The MTA also has been under scrutiny for its public education programs, or lack thereof. In 2008, the Permanent Citizens Advisory Committee to the MTA, a transit advocacy group that holds a non-voting seat on the MTA board, released an analysis of accessibility and the MTA. It recommended the agency "develop an accessibility courtesy campaign " because "people with disabilities, especially wheelchair users, are frequently disrespected by the riding public."

The report cited the public's failure to allow disabled passengers priority access to elevators and AutoGate exits. It also said other riders did not give the disabled maneuvering space on subway cars and platforms and often would not give up priority seating on buses.

"Passengers need to be reminded that they share the subways, buses and trains with thousands of other riders and should be courteous and considerate to all travelers, including people with disabilities, " the citizens committee wrote. The subways pose a particular problem with many passengers not even realizing some are designated for handicapped riders.

How much of the problem is New York and how much is an aging transit system? To put the issue in perspective, one can look at Boston’s public transportation system, the MBTA -- which is significantly smaller but also dates back to the 19th century -- has a total of 167 elevators. On average, from September 2009 to September 2010, they worked 96.6 percent of the time, according to Laura Brelsford, system-wide accessibility coordinator.

There are 176 escalators and 223 elevators within the New York transit system, according to Parker. She did not cite the average repair time.

The Boston system faced its own lawsuit brought by local disabled advocates, which was settled in 2006. Now, though, 406 out of 558 or 73 percent of its light, heavy and commuter rails are wheelchair-accessible.

Boston shares with New York its old streets and sidewalks, infrastructure, fragile buildings and historic landmarks, begging the question why is that system so much more accessible? Commented Weisman, it's a question of “priority not technology.”