NEW YORK — The redistricting battles are here again. Every 10 years, the New York City Council embarks upon a quasi-independent process of redrawing its legislative boundaries to comport with the demographic changes evidenced in the U.S. Census.

And every 10 years activists, lawyers, elected officials and political pundits weigh in on what is essentially a bare-knuckles political exercise.

Earlier this year, the worst aspects of redistricting made a comeback appearance in Albany.

Then the three men in the room brokered a late night resolution of state Senate and state Assembly lines that especially flummoxed the liberal activists who were well within striking distance of initiating independent redistricting at the state level, but now have nothing to show for their efforts.

New York City Council redistricting is an entirely different affair. Gone are the partisan battles between D’s and R’s. Instead, political machinations about positioning for mayoral and City Council president runs provide the subtext for who’s on the outside looking in during redistricting.

Term limits clearly add another layer of complexity or, should I say, relief, since it reduces the incumbent protection mantra that characterizes most redistricting wars.

All of it lands in the lap of the Redistricting Commission appointed by the Council and the mayor that provides, at least in part, a buffer between naked political ambition and revenge and transparency.

The process, however, is also beholden to the principles of racial and language minority equality as embodied in the Voting Rights Act, the federal law that has clearly protected marginalized voters from Black, Asian and Latino communities from the abuses of incumbency protection. 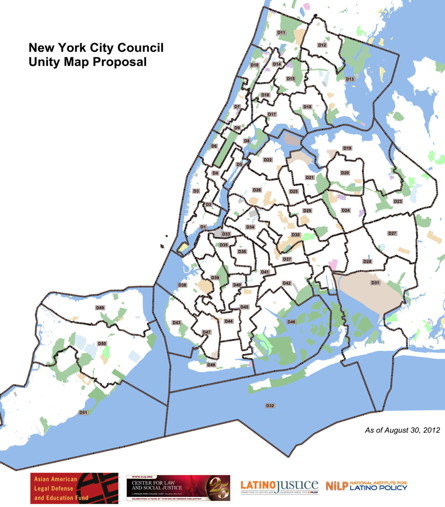 This is where the Unity Plan comes in as a marker of what a compromise plan that strives to comply with federal and state law can achieve in a complex, multi-racial city. Produced by mappers, activists, and lawyers from the Asian American Legal Defense & Education Fund, the Center for Law & Social Justice at Medgar Evers College, LatinoJustice PRLDEF, and the National Institute for Latino Policy, the Unity Plan represents months of mapping scenarios, community meetings, legal discussions, and consultation with minority elected officials.

The Voting Rights Act requires the city to demonstrate that the voting strength of protected minorities in three of the city’s boroughs does not retrogress compared to what they possessed at the time of the plan’s submission for federal approval, or preclearance.

The Act also has a general guarantee on non-discrimination that provides blacks, Asians and Latinos an equal opportunity to elect their candidates of choice.

Finally, the constitutional requirement of equality in population, “one person, one vote” and the case law mandate that prohibits the division of communities of interest created additional guide posts for the Unity Map engagement.

Following these precepts and accounting for the shifts and increases in black, Asian and Latino populations, the overall Unity plan unites communities of interest between Asians in Chinatown and Latinos in the Lower East Side; reduces significantly the fracturing of Asian communities in Richmond Hill and Bensonhurst; creates an additional Latino majority district in upper Manhattan; and solidifies black communities of interest in Jamaica and Canarsie.

The Unity Map is the first citywide proposal received by the Redistricting Commission that attempts to address the multiple requirements under voting rights law.

But it really is an opening salvo in a longer engagement with the public and the commission.

Earlier this week, the commission issued its own preliminary draft, which itself is the starting point for negotiations. At least it better be because the commission’s plan egregiously splits Asian communities in Bensonhurst, Ozone Park, Richmond Hill, Elmhurst and Bayside; black communities in Canarsie and Wakefield; and Latino communities in Soundview, Bronx River, Westchester, Mount Eden, and Highbridge in the Bronx.

In short, the commission has yet to fully account for the distribution of racial and language minorities â€“ something that it must do successfully to obtain preclearance, and something that the Unity Plan proponents will monitor vigorously.

Juan Cartagena is president and general counsel for LatinoJustice PRLDEF, a civil rights and advocacy organization founded in the early 1970s.