Criminals are among New York City’s most popular exports. According to a recent study, about 44,000 state prisoners, or two-thirds of the entire state prison population, are from New York City. Yet only 3,000 of these inmates are in state-run jails that are actually located in New York City. The rest are trucked up to state-run prisons upstate. While inconvenient to their relatives, their relocation is a huge benefit, both economically and politically, to rural counties upstate â€“ at the expense of New York City.

All together, there are some 108,000 people imprisoned somewhere in New York State, according to the 2000 census.

Most of those prisons are upstate, as the accompanying map shows. 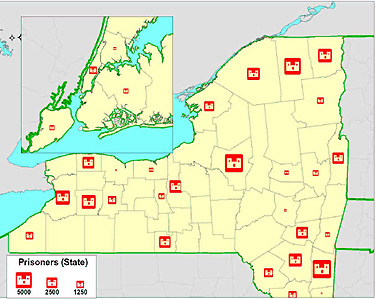 All prisons built since 1982 have been constructed upstate. There are so many inmates in sparsely-populated rural counties upstate that nearly 30 percent of all new residents in Upstate New York in the 1990s were prisoners, according to a Brookings Institution study. Upstate gained 21,000 new prisoners during the decade, an increase that was accompanied by a growing number of prison staff, as well as inmates' relatives. Upstate has a larger share of prisoners than the nation as a whole -- 1.1 percent of its population in 2000, compared to just 0.7 percent of the U.S. population.”

Since the average cost of housing a prisoner in New York is upwards of $40,000 the economic impact of having a prison is enormous. Resources spent on prisoners cannot go for other public activities, so resources are diverted from education, housing and other services to housing prisoners.

Unlike the residents living at-large who surround them they are much more likely male (over 90 percent), black (about 57 percent), and Hispanic (about 30 percent.) Most of upstate New York, of course, is predominantly non-Hispanic white. The only way that such residents are truly welcomed upstate is when they are locked away in cells.

But why are they welcomed even then?

The answer is: they are officially counted as upstate residents.

Services that are provided to them stimulate the local economy, which is frequently in decline.

The prisoners also supply another unique benefit to the upstate region. They allow it to have more voting power than its population would merit if prisoners were not there. Since prisoners cannot vote but are counted in redistricting, they give upstate the benefits of extra people (and cash) without the locality being obligated to address any of their needs. Legally, residency is generally determined based upon both where one is domiciled and the intent to remain there. So a prisoner taken from his home in New York City and counted in an upstate prison, which he expects to leave as soon as he can, is not really an upstate resident. The census could count such individuals where they once lived, as they do overseas military troops. Instead, the census, in effect, gives that population to the upstate New York City rural areas or other areas where prisoners are housed. A new and aptly named web site “Prisoners of the Census” developed by Soros Justice Fellow Peter J. Wagner gives many more details on these impacts.

The impact of this practice in New York State is large. In effect, about 44,000 people are arbitrarily transferred from New York City to upstate, and redistricting for every level of state office is affected. For instance the following Senate districts would be legally underpopulated and need to be redrawn were it not for the prison population:

At the same time several districts in New York City, most likely in Queens, would be over populated, if the prisoners were counted as residing in the city.

According to one commentator New York City prisoners are not residents of upstate â€“ they cannot vote or otherwise participate in the local society -- but merely “unwilling sojourners” there. Many are arrested on drug offenses and held for long mandatory minimum sentences. This might help explain why the upstate legislators, most particularly the State Senators from rural upstate districts, are very strong supporters of keeping the Rockefeller drug laws intact.

Once New York City prisoners finish their sentences, they leave upstate and move back to the city with little or no services or reentry assistance beyond that provided by social services and the probation officer.

In sum, New York City residents who become prisoners based in large part on the Rockefeller drug laws are transported upstate to be exploited both economically and politically in largely Republican areas.