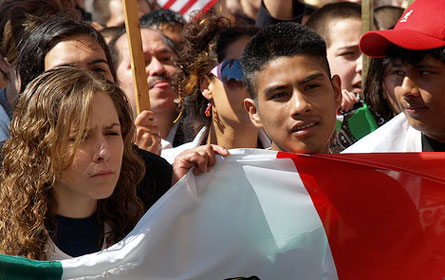 At a community center in Sunnyside, Rosalva Rodriguez, a Colombian immigrant, sits working on a quilting pattern. The room is filled with the sound of consecutive Bingo numbers, called in both Spanish and English to an elderly crowd.

Rodriguez of Woodhaven talks openly about her immigration status. She says she has a green card, and her sons are both citizens. She's extremely knowledgeable about the upcoming 2010 Census, citing its implications and benefits, and says that she will, of course, participate.

But Rodriguez is a rarity among New York's hard-to-count immigrant community.

Many are scared to share their information, reported the U.S. Census Bureau at a recent press briefing. But on a survey where population is directly tied to federal funding and congressional representation, New York officials and organizations want to ensure every person is accounted for. In particular, calculating the city's estimated 500,000 undocumented immigrants has proven to be a substantial hurdle in achieving accuracy. For many of these individuals, the 2010 Census represents a murky unknown -- a vast question mark, which many fear could lead to a one-way ticket home.

"They are scared to participate because they think this survey will work to deport them," says Rodriguez in Spanish.

Adds a woman quilting beside her, "They think the information collected from the census will later go to immigration [enforcement], and then immigration will tell on them."

This is the exact mentality the Census Bureau is trying to combat. On June 2, a coalition of immigrant organizations, government officials and census representatives held a press conference for ethnic and community media.

The panel urged the 50-some reporters to get the word out to their constituents, allay their fears and promote the benefits of taking part in the national count.

"I want to assure you that participating in the census is safe," said Allison Cenac, senior officer in the New York regional census office. "We just want to get New York City countedâ€¦ No one will be deported or lose their homes."

Not only safe, officials said it is highly advantageous for undocumented immigrants to take part, since their involvement would lead directly to increased federal monies for services used daily by non-citizens, such as subways, hospitals and schools. Officials reiterated that the information would not be handed to other government agencies, and that sharing of census data was a punishable offense.

Though the census won't be mailed out until March of next year, the bureau has already started an aggressive campaign to reach undocumented individuals, according to Stacey Cumberbatch, the New York City census coordinator. They've partnered with local grassroots and immigration nonprofits to tailor their outreach to specific ethnic and religious communities. In addressing the wide range of languages -- 146 are spoken in city public schools -- the Census Bureau has translated their website into 18 and will mail out language guides on how to obtain a form in 59 languages, said Cumberbatch.

To increase response among all demographics, the form is the shortest in a participant's census history, and it does not include questions about social security numbers or income. Census representatives are also stressing the role of ethnic and community newspapers in getting the word out.

"No one can get this information to your communities like you guys can," said Juana Ponce de Leon, the executive director of New York Community Media Alliance.

By using these trusted, local mediums as outlets, the bureau is hoping they will get the message across to hard-to-count communities. If not, said one official, the effect would be "devastating."

"If undocumented folks do not participate they do not exist," said Cumberbatch.

An overwhelming number of organizations and politicians have heeded the call of the Census Bureau and have urged participation in their communities.

But Reverend Miguel Rivera, chairman and chief executive officer of the National Coalition of Latino Clergy and Christian Leaders, is leading a boycott against the national count. His organization represents over 20,000 pastors in 34 states, who are asking their undocumented constituents to protest the census unless "comprehensive immigration reform" is established first. Rivera claimed one million members, about a quarter of the group's affiliates, have already expressed support.

"Yes, our presence here and an accurate count are very important, but only if we have the same rights as everyone else," said Rivera. "The reality is, for the last eight years, and many more, we have been waiting for some solution."

Rivera said a boycott would have occurred with or without his help. He argued, however, that an official protest pushed by the coalition would effectively "bring the immigration issue to the forefront of dialogue" and "finally put pressure on Congress." Additionally, he claimed there are no benefits for the participation of undocumented immigrants in the census, aside from allocation of resources to public schools.

Census organizers and community groups promoting an accurate count are calling the movement counter-productive and illogical.

"It's slightly absurd," said Alan Kaplan, civic and electoral participation program coordinator for the New York Immigration Coalition. "It will lead to an undercount of a population which desperately needs to be counted correctly in order to show their power, their strength, and get their federal dollars."

"This effort threatens to undermine our badly needed representation at all levels of government," said Cintron. "It's extremely important that all of us be counted so we receiveâ€¦ a bigger share of individuals that will represent us."

But, Rivera contended, this is the exact point he takes issue with. He said that since undocumented immigrants are counted, yet cannot vote, they are not able to choose who is representing him. The result, he said, is an increase of delegates pushing an anti-immigration agenda in areas with a strong conservative base, like parts of Long Island.

"The people who actually get to vote are the ones who are grateful for that effort from undocumented people," said Rivera.

Back in Sunnyside, Rodriguez says she understands why Latinos would join this boycott, considering restrictive laws and the aggressive policies of agencies like the Immigrations and Customs Enforcement.

"It's logical. It's logical that people think this because they have seen what the government has done," she says. "They have seen two men at the door at four in the morningâ€¦" she adds, her voice trailing off.

Kaplan said regardless of the national clergy coalition's support, in the end, their efforts will hurt their own communities.

"Whatever media coverage, whatever their gain, it's going to be discounted by the fact that their communities will be underrepresented."

According to a 2008 report by the Pew Hispanic Center, there are 11.9 million "unauthorized immigrants" living in the U.S. Though Hispanics constitute about three quarters of that figure, Kaplan said it's critical that efforts to count non-citizens reach even the smallest factions.

"We're not only dealing with Latinos in the city. We're dealing with small groups who aren't necessarily being reached out to," he said.

Kaplan named other groups like the African population in Staten Island and South Asian and Arab immigrants in Queens -- each present specific challenges to be counted.

Lester Farthing, director of the regional census office, said that the attacks of September 11, 2001 produced a particularly difficult problem for an accurate count.

"We realize our greatest challenge is working against the fears of what happened with 9/11," said Farthing.

Mohammed Razvi, executive director of the Council of Peoples Organization agreed that the aftermath of the attacks created an atmosphere of distrust among South Asians toward the government.

"They already had a misconception and the atrocities that occurred after 9/11 where people were apprehended just because of their name, without a warrant or any wrongdoing made it even more of an uphill battle," he said.

Razvi said this further compounded their tendency of being underrepresented.

"We are so unbelievably undercounted. I think we were undercounted for almost 100,000 people [in 2000]," said Razvi. He offered a reason: "I think this is the misconception of people coming from a third world country that the government coming and taking your information is a dangerous thing."

Razvi is working against this fallacy by holding town meetings, talking to imams and recruiting community members to become census representatives.

Getting the attention of each diverse group, said Cumberbatch, needs a different approach.

"It may be the mosque, it may be the soccer league," she said. "It's where people live, work, play, worship. We try to look at for different groups on how to access."

It appears undocumented immigration participation in the 2010 Census comes down to one thing.

"It's trust. That's it and nothing else," said Razvi. "That's the way to move forward. It's unfortunate that these are the communities that need the most services that they are entitled to but lack of involvement in the census hinders the service that they will be given."

Cintron said this is why organizations, politicians and the government have started galvanizing support nine months before the first census is mailed out.

"It's going to impact us for ten whole years and that's why we want to start this now and why we're having this conversation now. We have to figure out ways to get people interested."