The soaring values of apartments and houses in the city gave many New Yorkers a major real estate obsession during the first part of this decade. After residential real estate prices took over a decade to climb back to their levels of 1987 (the beginning of the last real estate crash), property values began to soar in 2000 and continued their heady ascent until recently. Now, of course, real estate price increases are yesterday's news as buyers dry up, inventories of unsold properties mount, sub-prime mortgages readjust and foreclosures increase.

This fall in the housing market will have many effects in New York City. But some New Yorkers, particularly lower-income people, blacks and Hispanics, will feel more pain than others.

The End of the Boom

Meanwhile, according to U.S. Federal Reserve chair Ben Bernanke, losses from sub-prime mortgages (higher interest loans taken out by people who cannot qualify for conventional mortgages) have far exceeded "even the most pessimistic estimates."

These will probably mean pain for the New York City. As residential real estate prices decline, tax revenues will fall. Some residents will lose their homes, and others will be strained near the breaking point to pay their mortgages or will take advantage of various state and federal loan "stretch-out" or "work-out" provisions that have yet to be enacted.

The rise in housing prices was fueled by new mortgage products that allowed people to buy homes with no down payment upfront. Many of these loans did not require income verification. Then the mortgages were packaged and sold as securities to financial institutions. The failure of many people to repay their loans set off the recent credit crunch.

What does the housing bubble and likely bust mean for New York City. Which residents are most affected?

For one, the credit crunch and its reverberations on Wall Street could ultimately affect the bonuses of Wall Street traders and brokers.

The effects, though, go far beyond that. New York City, despite many claims to the contrary, actively participated in the housing bubble of 2000 to 2006. Data from the Census Bureau’s 2006 American Community Survey, released on September 12, 2007 provides a view of the many ways that New Yorkers are vulnerable to any meltdown in real estate value and accompanying credit crisis in the mortgage industry.

In New York City in 2006, almost half of all those with mortgages spent more than 30 percent of their income on housing costs, including mortgage, taxes, insurance and utilities. More than one quarter paid over 50 percent. Of those who purchased homes with a mortgage in the last two years, half were paying at least 32 percent of their income for housing costs, and one quarter were paying 55 percent or more.

The high home ownership costs often reflect the introductory terms of loans that make them "affordable," for the first few years. When such loans readjust, the costs increase.

The picture looks particularly difficult for people purchased homes in 2005 and 2006. They made their purchase at what appears to be the top of this particular housing bubble. They may be in for a serious financial loss, as mortgages readjust while the underlying value of their properties decline. Those who have been in their houses for years generally do not pay as much of their income for housing costs, and though they may lose paper value, they will be able to continue to live in their home, as long as they did not refinance it using a new mortgage product.

Those most at risk of losing their homes because of high housing costs are more than proportionally minority, less educated, either very young or very old, and most especially with much lower incomes than those living in affordable situations. (See Table for the results.) The median income of those paying less than 30 percent of their income on housing is $120,900. For those paying between 30 and 50 percent of their income, though, the median is $74,390, and for those paying over 50 percent the median income is $39,900. 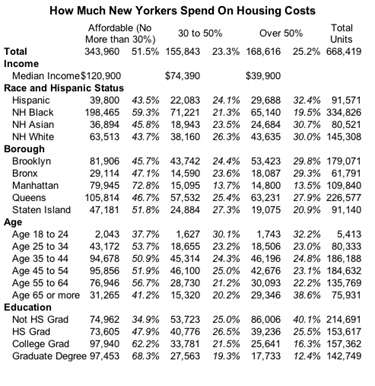 Not surprisingly, the areas with the highest proportion of income going for home ownership costs are in Queens (especially Jackson Heights, East Elmhurst and Corona), Brooklyn (notably Borough Park, Greenpoint/Williamsburg, Bushwick, East New York, Ridgewood, Cypress Hill, Highland Park and New Lots) or the Bronx (in particular Morris Heights, University Heights and Fordham.) Manhattan homeowners do not appear to be spending more than they can afford to anywhere the extent of those in the other boroughs. (See map.)

In short, the housing bubble, fueled in part by sub-prime mortgages affects New Yorkers in different ways. However. even many New Yorker who do not work on Wall Street or have a sub-prime mortgage may feel the pinch. As residential property values decline and tax revenues fall, all New Yorkers who depend on city services or who work for the city or state will face stringencies. Thought the housing bubble may have been exciting for many, particularly those selling mortgages or moving into houses they probably could not afford, its hangover is likely to affect everyone.

(Note on sources: This analysis was largely based upon the Public Use Micro Data Sample, or PUMS, from the 2006 American Community Survey, while some data are drawn from tabulated data from that survey and the 2005 survey and the 2000 Census. All responses are based upon self-reports of income, house value, race, education, etc. The data are subject to sample variation.)