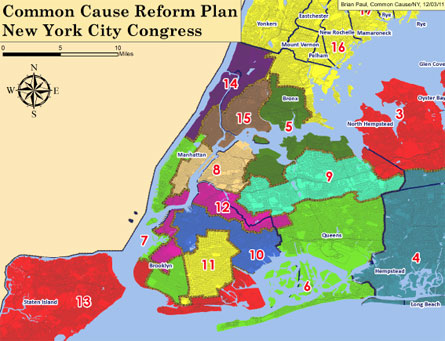 Map by Common Cause
Common Cause maps the city's Congressional Districts.

This week a number of Assembly Democrats got a peek at what their new district lines will look like if the Legislative Task Force on Demographic Research and Reapportionment has anything to say about it. And LATFOR, with legislative leaders, has for decades had the final word on drawing district lines for the state. The process of redistricting was conducted in secret, lines were drawn to protect incumbents and maintain the senate Republicans’ majority, legislators were consulted on what would be convenient for them. The people were as far away from the process as possible.

Even when their plans were challenged in the court as politically motivated or inherently in violation of the law, LATFOR and the majority leaders came out on top.

But this time things have changed. Thanks to the internet, the process by which legislative districts are carved up is no longer such a mystery. Mapping technology allows any citizen with a computer, some spare time and the proper information to draw up their own set of maps. Earlier this week Common Cause issued their own lines and teamed up with Newsday to present the public with an interactive mapping tool so that they can try it themselves.

"We have been outspoken about the problems with the current process, which is characterized by partisanship and political self-interest," said Common Cause’s executive director, Susan Lerner, during a conference call with the press. "Our goal has been to show that there is no practical impediment—it’s only a political one—to achieving fair, non-politicized district maps."

"It is kind of like pulling back the curtain,"said Sen. Liz Krueger, who has been looking forward to seeing Common Cause’s lines for months. She apparently wasn’t the only one.

Assemblyman Jack McEneny, Democratic chair of LATFOR, said that he and his colleagues have been waiting to see what Common Cause produced, and the plan is to utilize parts of their maps.

"We have been anticipating them for some time," said McEneny. "We will take a look at them and see what good parts we can incorporate into our plan. Then I would expect we will begin to have public hearings in January."

As for what it feels like to have the public breathing down his neck while he is doing a job that used to be draped in secrecy, McEneny said, "Things have changed. It is part of democracy to be second guessed. We grow up thinking things are either good or bad, but there is a lot of gray here, a lot of competing interests and groups who value certain things over others."

The Power of Politics

Although they are happy to see the public given a chance to be more informed and involved in the redistricting process, members of other good government groups are skeptical that Common Cause’s efforts will change the end result.

"I think they (Common Cause) looked at lines in a non-partisan manner, and that is refreshing. It looks to me that they managed to keep communities of interest together without regard to incumbents, and that is refreshing. But I don’t think it will make a darn bit of difference. I don’t think LATFOR has regards for anything but incumbency protection," said Barbara Bartoletti of the League of Women Voters.

"I think the maps are very instructive of how impartial districts could be drawn but I’m doubtful they will be utilized by LATFOR because of the political reality," said Dadey.”

Gov. Andrew Cuomo has promised to veto any lines that are drawn up by LATFOR, but he has also indicated that a veto would cause chaos—chaos that he would like to avoid. For months Cuomo’s office has been negotiating for a compromise that would avoid a veto. So far nothing has come of it. Cuomo’s office did not return calls for comment.

If such a deal came together it is unlikely to make use of Common Cause’s maps, as they are based on the kind of change that would happen if politics were not involved, whereas current negotiations are based on what will get senate Republicans to the table to agree to some sort of compromise.

Dadey said that he has spoken with the three parties involved in the negotiations. "Even though we may add a level of openness to the 2012 process it will be a political decision and Common Cause’s maps are apolitical," said Dadey.

The idea is to achieve a deal that would see less drastic change this year but perhaps something more substantive for the next round of redistricting in ten years. There is a sense among some at the negotiating table that Common Cause’s lines could frighten Senate Republicans away.

"To achieve reform we will need the unusual convergence of interests that include the Senate Republicans. Any reform any reform must treat all parties fairly now and in the future," said Dadey.

Others see things differently. They think the lines might make Senate Republicans more apt to make a deal that would avoid a veto, which would mean putting their future in the hands of a judge—especially when a judge could use Common Cause’s lines as an example of what districts might look like with without legislators drawing them.

But other advocates point to New York’s demographics and the fact that a majority of New Yorkers are registered Democrats.

Krueger thinks that Common Cause’s lines will serve as a guide post for LATFOR, Cuomo, or the courts if it does come down to a veto. Now that the public has been informed about the process, Krueger thinks it will be hard for LATFOR to ignore the fact that people are watching and won’t accept the excuses LATFOR used to make, excuses like, "There was no other way we could have drawn them."

Common Cause isn’t the only group allowing people to try their hand at redistricting. Fordham University is holding a competition for teams to redraw New York’s district lines. One of the participants is a ten-year-old child from Michigan.

Just How Bad is it?

A recent report by Citizens Union showed just how integral the redistricting process has been to keeping incumbents in their seats and maintaining the balance of power in Albany. The report showed that 96 percent of incumbents have been reelected since 2002. In 2006 100 percent of incumbents were reelected. The report shows that the current redistricting process makes elections far less competitive and as a result reduces voter turnout. Furthermore the report shows that minorities are underrepresented. "There are 15 different Assembly districts in New York City where the Asian-American population exceeds 20 percent, but there is only one [Asian] representative in the Assembly," Citizen Union’s Alex Camarda.