The life that has returned to New York City waters has swollen old grudges stemming from turf and tactics. It is not the Sharks and the Jets (not yet, at least), but the tension is undermining the city’s ability to compete with other harbor cities at a very critical time.

Tens of millions of dollars in federal funds are at stake, with the federal transportation bill known as TEA-21 (Transportation Equity Act for the 21st Century) set to lapse this fall. Recently the Bush administration released its $247 billion nationwide vision for transportation infrastructure, construction and repair over the next six years. (Click for a copy of the new bill, which the administration is calling SAFETEA). New York may miss an important opportunity to upgrade and repair its decaying waterfront piers and improve air emissions from ferries, as rival harbors such as Seattle and San Francisco (in pdf format) have been doing in recent years. 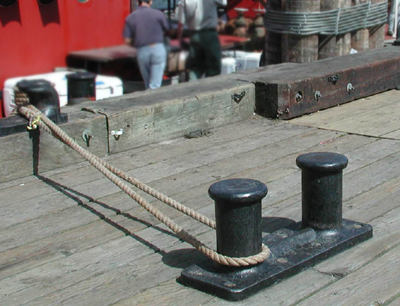 Bollards and fender piles are the nuts and bolts of water transit, as seen here at Bear Mountain

While New York has largely come together since September 11, 2001, the family of waterway users is becoming estranged. A recent New York City Council hearing showed just how frustrated people are with each other, as speaker after speaker ganged up on ferry giant New York Waterway for the volume and size of wakes that their ad hoc fleet is throwing off as they run back and forth across the Hudson.

Some of the worst offenders seem to be the fishing vessels that have chartered for some of the runs in the last 20 months. “We’ve got to get those fishing boats out of town,” said Tom Fox, president of New York Water Taxi, a 10-month-old upstart operation that just took on the Brooklyn to Lower Manhattan route that NY Waterway dropped when the Federal Emergency Management Agency stopped paying to subsidize it,

New York Waterway came well equipped to defend itself, as company president Arthur Imperatore , Jr. and three other representatives delivered a powerpoint presentation showing how much money the company is investing in a tracking system being developed by Stevens Institute of Technology in Hoboken so that the route and speed of every vessel in their fleet could be monitored in real time. “No one is spending more money than we are on trying to solve the problem,” Imperatore said.

But this did not satisfy others at the hearing. “I’ve never seen such a blatant case of blaming the victim in my life,” said one vessel captain.

This David versus Goliath story has been playing out for years, and costing New York as well. The last round of the federal transportation funds included special set asides for the states of Washington (in pdf format), Alaska and New Jersey totaling nearly $100 million. New

York got no such set aside, and outside the considerable Staten Island Ferry investment ongoing, the other three boroughs have spent the last six years cobbling a ferry network together with the capital budget equivalent of krazy glue and duct tape: funds from the Port Authority of New York and New Jersey and, since 9/11, the Federal Emergency Management Agency.

For a city that grew up from the shore, we have a real landlubber’s perspective on transportation. Looking around, California (in pdf format) is already hoping to add themselves to the gang of three to be eligible for the Ferryboat funding. And just when other transportation players around the country are lining up together to grab their share of the federal pie, New York Harbor interests are undercutting each other. Wake up, people, the boat is leaving the dock!