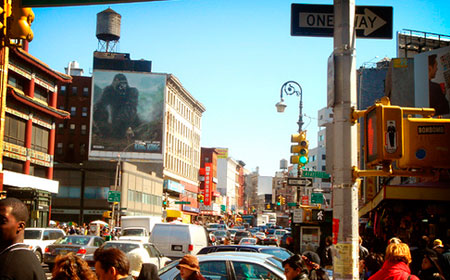 A second-generation Chinatown native, Willie Rosado longs for the old neighborhood feeling of Chinatown. He misses getting a roast pork bun down the street where everybody knew everybody.

"It is not the old neighborhood anymore," said Rosado, the son of a Puerto Rican father and an American-born Chinese mother. "Many mom-and-pop restaurants are closed. The area is getting very crowded and all my friends moved out."

Rosado is not alone in his nostalgia. Christina Mei, a native of Taishan, Guangdong Province, moved to Chinatown in fifth grade. She attended P.S. 42 and I.S. 131, and frequented shops and restaurants in Chinatown.

"Now you see all the new condos," said Mei. "They are very expensive. Local residents don't have the money to buy them. Those non-Chinese people are paying over a million dollars for one-bedroom apartments."

Some 26 luxury residential buildings have recently been built or are under construction in Chinatown, along with 25 new hotels, and 118 new high-end boutiques and cafes, according to a report by the Urban Justice Center and Committee Against Anti-Asian Violence, or CAAAV. The report also pointed out that there were 195 commercial construction permits filed with the Department of Buildings in Chinatown between January and November 2008.

So, has gentrification finally arrived in one of New York's oldest ethnic neighborhoods?

Many said the transition began years ago. "Gentrification in Chinatown is not a new phenomenon," said Esther Wang, project coordinator for the Chinatown Justice Project at CAAAV. "What we have seen in Chinatown in the past few years is that development has really picked up."

"In the real estate market, Chinatown is probably the last frontier", said Justin Yu, president of the Chinese Consolidated Benevolence Association, popularly known as Chinese Community Center on Mott Street. "But most of the designs of the new buildings are contradictory to what we have."

"The gentrification of the New York Chinatown community has been going on for the past five years or so," said Paul Gong, who founded Friends of Columbus Park and is a former president of the Asian American Youth Center. "Only a few can afford this expensive living environment. So that means new tenants, new people other than Chinese, new stores and a whole new environment catering to our new neighbors."

"All this has resulted in many Chinese moving and settling in Brooklyn," said Gong, referring to the satellite Chinatowns in Sunset Park and Sheepshead Bay. "It has become harder to afford and live in Manhattan. Poor and recently arrived immigrants and low-income Chinese are being forced out of New York [Manhattan] Chinatown or are forced to live in overcrowded conditions where multiple families share a tiny apartment."

Residents worry that the city's recent rezoning of the Lower East Side next door could accelerate the process. That neighborhood, of course, has seen a major transformation as cafes, bars and boutiques as well as high-rise condos have sprouted in the area. In November, City Council approved a plan that limited the height of new buildings to no more than 80 feet and provided for affordable housing. The rezoning triggered fear among Chinatown residents that developers of luxury high-rise buildings -- now restricted in the adjacent Lower East Side -- will push their projects south to Chinatown.

When the council approved the Lower East Side rezoning, the Bloomberg administration reportedly indicated it would try to protect the character of adjacent areas, particularly Chinatown. Meanwhile, in order to present a more united front and build consensus, more than 30 community-based groups, including Manhattan community boards 1, 2 and 3m formed the Chinese Working Group last year.

"One of the purposes is to speed up Chinatown's rezoning," said Yu. "The best thing is to preserve the characters of our community, protect the rights of the local residents to stay here, and we would also like to attract some new investors to build new construction."

The group holds a monthly meeting and has several sub-committees that specialize in various issues such as education, recreation, economic development, and transportation. In one to two years, it hopes to come up with Chinatown’s own community or 197-a plan, offering its own ideas for local development, improvement and growth. The Chinatown plan will include a rezoning proposal as well as other measures to improve Chinatown. The rezoning of the Lower East Side followed this model.

The community organizers said they want new development, but not at the expense of the low-income residents.

"Development is inevitable. There has to be development for progress to take place," said Charles Lai, executive director of the Museum of Chinese in America. For example, he thinks that dilapidated buildings constructed at the turn of the 20th century need to be repaired or replaced to be fit for human habitation. "But the flip side of development is who is allowed to work, live and play in the neighborhood," Lai continued. "When people are pushed out, it is not good."

Margaret Chin, a long-time community advocate who is running for the City Council, agrees. "There is a lot of history in Chinatown that needs to be preserved, but it doesn't mean that we should be living in dilapidated housing," she said. "We want new housing in Chinatown. But it has to be affordable so that people who live in the community can stay in there."

Some in the community say the new buildings do not fit in with the neighborhood's overall look. "We would like some new buildings but the condition is that the design has to be similar to what we have," said Yu.

Starting from only a few city blocks in the late 1800s, Manhattan's Chinatown is one of the largest Chinatowns in the world. It has served as a neighborhood for working-class Chinese and recent immigrants -- and as a major tourist attraction.

"When you go to Chinatown, you'll see how vibrant it is," said Wang. "New York City is a city that is known for being diverse and cosmopolitan. ... When those values are trumped instead to favor real estate values, everybody loses something really important in terms of cultural vibrancy and the things that make a city a great city."

Still recovering from the economic impact brought by the devastating 9/11 attacks in 2001, Chinatown faces many challenges in addition to the current recession. But community leaders are optimistic.

Meanwhile, the residents and New York's Chinese community seek to adapt to new conditions. Working to protect Chinatown involves "preserving the historical fabric of what is old Chinatown and what that means to people who are from here and grew up here, but also integrating the new generation of Chinese Americans," said Beatrice Chen, director of education at the Museum of Chinese in America. "That's why there are different types of shops and businesses that you wouldn't normally associate with the old-school Chinatown."

At the end of the day, unlike Little Italy which has few new immigrants, the steady streams of incoming immigrants from China will probably ensure Chinatown's growth.

"Chinatown is an established community," said Wang. "Immigration from China to New York City is going to continue and that's a factor will keep Chinatown a pretty vibrant community for a long time."