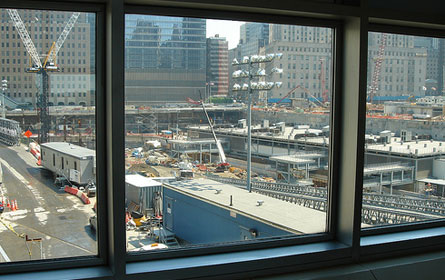 Once again redevelopment of the World Trade Center site is looking more like an epic struggle in a Greek tragedy. Even those characters who may be aware of their fate are locked into the logic of the post-9/11 hubris and are forced to play along as the saga reaches its ultimate consequences. Mayor Michael Bloomberg’s recent attempt to fix things could have been the miraculous deus ex machina of Greek tragedy, in which gods drop onto the stage at the end to avert tragedy and make a happy ending. But that didn’t happen and now Gov. David Paterson has volunteered for the rescue mission.

The latest turn in the drama suggests that it won’t be over any time soon. After the breakdown of negotiations with the Port Authority of New York and New Jersey, developer Larry Silverstein called for arbitration to settle a dispute over financing. Silverstein, the major leaseholder, wants $2.6 billion in loan guarantees from the authority to build two towers that it is estimated will cost $4.2 billion to build. The authority says it will guarantee $1.2 billion for one of the towers, but only if Silverstein raises $625 million privately.

Silverstein blames the authority for the financial deficit because it has fallen behind schedule in construction of the transit hub and the Vehicle Security Center on the site. For its part, the Port Authority says that it would be too risky to put so much money behind the construction of such a huge amount of new office space in the current market, where private lenders have withdrawn.

So while both public and private sectors are at an impasse, the press and public stand on the sidelines witnessing what may well be the second disaster at Ground Zero -- not just the failure to rebuild but the looming possibility that the whole plan will never be implemented and New York will wind up with a new set of twin towers on the site that will create for lower Manhattan many of the same problems that the World Trade Center once did.

Maybe it is time to go back to the drawing board, reconsider the original plan, buy out the private parties and start again by asking the question what’s best for both New York and world peace, as many civic groups did after 9/11.

The Failed Plan for Ground Zero

From the start, the logic of the World Trade Center plan was to put back on the site most of the 11 million square feet of office space that was lost on 9/11. After eight years of planning, disputes over insurance money and financing, battles among architects, and a regular drumbeat of assurances from the protagonists that things are moving forward, the market for office space has caved in. Crain’s reports a 44 percent drop in rents for Manhattan office space in the first half of 2009. Projects already in the ground face a troubled market and revenue shortfalls.

But the current market is not the only problem. The way the plan was devised has exacerbated the situation.

Short-term planning was in charge right from the beginning. "Rebuild the tower" was the rallying cry of Silverstein, who owned the largest long-term lease on the site, and it was raised to patriotic heights by then-Gov. George Pataki, with support from the Real Estate Board of New York. Despite reservations, the city’s new mayor, Michael Bloomberg, went along with that goal.

An initial burst of civic interest, discussion and debate following 9/11 produced many proposal for innovative alternative development of the site. In response, Pataki moved swiftly to approve a slightly scaled-down version of an office park with some 10 million square feet of office space. The international design competition managed by the Pataki-controlled Lower Manhattan Development Corp. was all about how to make it look good, with a memorial and cultural center thrown in to assuage the demands of the victims’ families to preserve the site as a memorial and the desire of the local neighborhood to make it a mixed-use development.

The reaction of architectural critic Ada Louise Huxtable to the first round of plans for Ground Zero was prophetic. She said they were dedicated to "the restoration of all the commercial real estate by dumping it back in the same place in a slightly different form." She concluded, "This is dĂ©jĂ  vu all over again for those who remember the urban renewal destruction of lower Manhattan in the 1960s.”

Back then, urban planners, architects, office workers and local residents objected to plan for the original Twin Towers because of the way the project was separated from everything else in lower Manhattan by its vast, barren and wind-swept plazas. While the latest design for the site features signature buildings by famous architects including Norman Foster and Richard Rogers, the recent collapse of the real estate market suggests that for the foreseeable future only two of them -- at most -- will be built.

The Revenge of the Twin Towers?

Only two towers? Are we looking at an historic repeat of the original Twin Towers? And the new buildings, with anti-terrorist design features including monstrous bases encased in steel and titanium, will make the pre-9/11 versions look like pastoral wonders.

With the rest of the master plan for the site postponed indefinitely, the towers could again be surrounded by vast empty spaces or, at best, a couple of lonely memorial sites and a small cultural center. And the office buildings could have lots of empty space. The original Twin Towers, which opened in 1973, had so many vacancies that public offices were brought in to fill them up. No wonder the Port Authority doesn’t want to subsidize Silverstein up front.

So after eight years of wrangling over exactly how to dump the office space back on the site, this may be a good time to stop and go back to the drawing board. Maybe the critics were right in the first place. Perhaps it would be better to look at the site as an opportunity to express the diversity of interests and needs of New Yorkers. Since most victims of the attacks were not New Yorkers and 9/11 had repercussions far beyond Ground Zero, the focus might appropriately move beyond those who happen to own the land. Maybe New York could learn from the leading examples of rebuilding on sites destroyed during war, like Hiroshima, Japan â€“ a city that dedicated its plan to the cause of global peace and is today a destination for visitors from around the world.