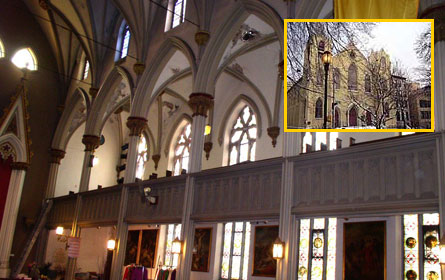 Photo from Save St. Brigid
St. Brigid's Church in the lower east side was recently saved from demolition by an independent wealthy donor.

The battle between preservationists and building owners in New York City seems perennial. To an average observer, this struggle escalated over the last 15 years as two consecutive pro-development mayoral administrations and a red-hot real estate market combined to make building construction accelerate at a pace that has made heads spin. Despite their tremendous efforts, proponents of historic landmarking have witnessed countless examples of architecturally important buildings renovated, altered or destroyed.

At the very core of the city's land-marking laws overseen by the 11-member Landmarks Preservation Commission lies a fundamental paradox that allows one city agency to function in virtual isolation from what another agency may be doing. The landmarks commission must give advance notice of possible designation to a building owner -- or for a historic district, owners. This, along with the time lag before any landmarks proposal goes on the calendar for consideration, creates a de facto loophole in the law.

Specifically, the Department of Buildings can grant work permits even when the landmarks commission has a building within its sights, a trick that has given more than a few developers time to alter a building sufficiently to make preservation irrelevant. Much has been written over the years discussing this loophole, including an editorial in the New York Times last December, urging legislators and the mayor to take action to prevent this from continuing. Now, some members of the City Council are heeding that call.

Manhattan Councilmember Rosie Mendez has a bill, which she first submitted to the Landmarks, Public Siting and Maritime Uses subcommittee in 2007, that seeks to improve communications between the landmarks commission and the buildings department.

Calendaring refers to the scheduling of a full Landmarks Preservation Commission public hearing on a property. Only the commission chair can determine whether or not a property comes before the entire commission. The landmarks commission does have 40 days from the time a property owner applies for a building permit in which it can decide to designate a property and so stop the permit from being issued.

Intro. 542A was given its second public hearing in June after languishing for two years following an initial one. "We're hoping this time ... we're getting through," said Mendez's chief of staff, Lisa Kaplan, who said she is unsure what the bill's current status is. "It's not clear where were going from here," she said, adding that the council's legal team is reviewing the bill's wording.

It is also unclear exactly why the bill received another hearing after all this time. Andrew Doba, a spokesperson for Council Speaker Christine Quinn, said the legislative process takes time "to get things to where we want them to be ... where there is widespread consensus." Doba added, "There are quite a lot of moving parts in this ... complicated bill."

Mendez was spurred by the long-running fight to preserve the CHARAS building in her East Village district. That former public school had been converted into a community and arts center and was subsequently sold by the Giuliani administration. Even though community activists successfully rallied to convince the landmarks commission to award CHARAS landmark status, the new owner took advantage of pre-existing permits to remove vital architectural characteristics after the designation.

Many preservation groups support the proposed changes in Mendez's bill. In testimony at the June hearing, Andrea Goldwyn, director of public policy for the New York Landmarks Conservancy, cautioned, that what she-called "pre-emptive" permits should not be allowed to prevent or circumvent the designation of worthy historical sites and structures."

For its part, the landmarks commission has expressed some support for Intro. 542-A. In his testimony, commission counsel Mark Silberman said, "The bill attempts to address a serious issue, of property owners pulling permits for inappropriate work in an attempt to foil landmark designation. Fortunately, this is a rare occurrence."

The legislation would allow a property owner to have the permit withdrawal overturned by the city's Board of Standards and Appeals if it would cause the owner economic hardship or if the owner has already made a significant investment in the property. Despite this, the Real Estate Board of New York testified against 542A arguing that the proposed appeals process would be "very expensive." Even in the event the Board of Standards finds in a developer's favor, the Real Estate Board argued, the lag between the challenge and the decision would create delays, cost the developer money and could jeopardize financing.

The bill "would impede development and renovation, delay many desirable projects and reduce construction jobs," the board's representatives testified. "It’s simply unfair to owners working in good faith to rescind a validly issued permit and it’s hardly a recipe for lowering development costs and revitalizing our economy."

A Question of Timing

Meanwhile, Queens Councilmember Tony Avella has submitted two landmarks-related bills, while wrangling with city lawyers on a third. That bill would go even farther than Mendez's, essentially overriding the buildings department and allowing the suspension of existing work permits. "There's no reason why it's [not] in the public interest to drop demolition permits" at any point during the landmarking process, Avella observed.

Landmarking activists have repeatedly expressed concern about the timing and sequence of buildings department work permits on one hand and landmarks status on the other. In an April letter to Robert Tierney, landmarks commission chair, about the pending South Village Historic District, Greenwich Village Society for Historic Preservation executive director Andrew Berman wrote that his organization has "very strong concerns about ... the very real potential for further and accelerated losses depending upon how the designation of the first phase of the proposed district is handled."

While testifying against 542A, the Real Estate Board of New York also addressed the time factor. "Building calendaring can come unexpectedly and quickly, making the building permits [a] meaningless pieces of paper. ... It is not always clear what buildings the [commission] is considering," it said.

The situation for owners and developers gets even dicier, the board testified, because the commission may leave matters open-ended. "After calendaring, it’s unclear when, if ever, they will make a decision about the designation. ... Some buildings that had not been designated after several reviews still have gotten reviewed again. Years of preparation work and expenditures on the part of a developer can be lost in a few weeks when the [landmark commission] decides to take yet another look at a property."

Avella's Intro. 1034 creates a specific timeframe for the landmarking process and directs the commission to schedule (calendar) a nominated building for consideration within 90 days, after which a public meeting must be held. If at that meeting three or more commissioners agree with the designation, the commission would have 60 days to make it official.

Avella's other bill, submitted in 2008, requires "experience-based qualifications" for landmarks commissioners. As presently written, the landmarks law requires the commission to be comprised of at least three architects, one historian, one city planner or landscape architect, and one realtor along with at least one resident of each borough. As Avella pointed out, there's no requirement for any member to have experience with historic preservation. The closest they get, Avella said, "is the historian -- but [no one] has to have any knowledge of our historical or architectural heritage."