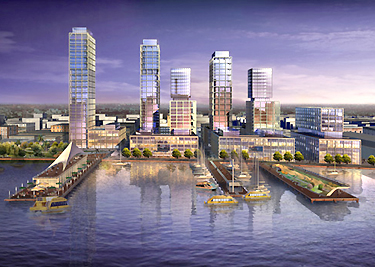 People fighting for the character of Brooklyn's waterfront see a tragedy -- and suspect a crime -- in the spectacular fire that engulfed 15 abandoned industrial buildings on Greenpoint's waterfront May 2. "I'm in a state of mourning over the loss in Greenpoint," says industrial archeologist Mary Habstritt.

The buildings were likely to obtain landmark status, she says. The character and history of the industrial waterfront could have been maintained while transforming the site into a residential and business area befitting the burgeoning residential character of Greenpoint.

That isn't what the developer wanted. He planned to raze the old buildings to put up 2.6 million square feet of residential towers, townhouses and retail. The 10-alarm fire that ravaged the 21-acre site and took days to put out will probably make it more convenient, less complicated and less expensive for him to proceed as he had wished.

A day after the blaze, the Daily News reported that Fire Commissioner Nicholas Scoppetta immediately suspected arson. A tell-tale sign was that the fire began in the quiet pre-dawn. Another indication of suspicious origin was that many buildings quickly went up in fierce flames, even before the first fire trucks arrived.

Based on her knowledge of construction methods in the past, Mary Habstritt, who is president of the Roebling Chapter of the Society for Industrial Archeology, had additional reasons to see an arsonist's hand. She says that in the 1890s, when some of the buildings on the site went up, there weren't sophisticated methods, as there are today, for preventing and fighting fires. Giant timbers, heavy and dense enough to withstand all but the hottest fire, spanned the floors and were set into holes in the brick walls. If a fire did rage through, the timbers should have fallen out of the walls, leaving the outside structure intact. But in this fire, Habstritt says, walls collapsed.

These buildings had resisted flames for more than a hundred years, says Habstritt. "They were constructed to resist fire. You couldn't get those timbers burning without help."

A former tenant of one of Guttman's Brooklyn loft buildings, Anne McDonald, also harbored suspicions as soon as she learned of the fire, she says. The Guttman building she had lived in at 247 Water Street in the DUMBO area of Brooklyn (whose troubled history has been recounted in the Village Voice)had burned in 2004. The fire was investigated but evidence as to arson was inconclusive. Four other Brooklyn buildings owned by Guttman have burned since 1991, according to the New York Times, all of them judged as arson.

Guttman, who owns properties all over Brooklyn, Staten Island and Queens, has never faced arson charges. Gotham Gazette's calls for comment to Guttman's home in Lawrence on Long Island and to his Brooklyn real estate office were not returned. His attorneys have told the media that he had nothing to do with the fires. They speculated that squatters or vagrants started the fire. One of his attorneys noted that Guttman did not have property damage insurance on the buildings.

Some 20,000 people live in a state of legal limbo in lofts on the waterfront in Brooklyn, says McDonald. In SoHo in the 1980s, when artists moved into the lofts abandoned by light industry in the neighborhood, the legislature legalized residential use by artists. That led to the transformation of the neighborhood. No such legal dispensation aids Brooklyn loft tenants. Not everyone would want the law amended to include Brooklyn. That would lead to an even faster-paced change to the neighborhood with higher rents.

"Usually, the landlord and tenant are complicit" in the illegal residential use of loft spaces, says McDonald. "It's a little bit of a gray zone."

After leaving Guttman's building, McDonald found a new loft space in the East Williamsburg Industrial Park. The landlord there upgraded the property and recently received a certificate of occupancy, allowing residential living.

Residential living in industrial property is the kind of thing that should have happened to the Greenpoint Terminal Market, say preservationists. The Municipal Art Society, a preservation group, had applied for landmark status. At least some of the buildings would have been preserved. There would have been accomodation for new high rises as well.

Habstritt and other preservationists see the loss of irreplaceable landmarks that convey the vital hurly burly of New York's industrial past. The value of the Greenpoint Terminal Market was in unique features, such as the dramatic bridges from building to building over West Street. There was the historical value, too. The buildings once held the largest rope and twine factory in the world. The waterfront location was practical. Materials to make rope came from imported materials unloaded from ships right by the factory. The place showed how it was the working waterways that made it possible for New York to become the great city it is. "We were really convinced that we were on the way to saving it," says Habstritt.