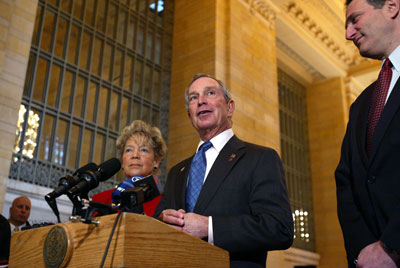 This is excerpted and adapted from the new book “Mike Bloomberg: Money, Power, Politics,” by Joyce Purnick (PublicAffairs, $26.95, 272 pages). Purnick, a veteran New York reporter and editor, has covered six New York City mayors in her years at The New York Times, the New York Post and New York magazine. She headed The Time's City Hall bureau and wrote the award-winning "Metro Matters" column for 10 years.

In her biography of Michael Bloomberg -- which tracks his life from his boyhood in Massachusetts to the start of his bid for a third term -- Purnick examines how the self-made billionaire became mayor, and his bold approach to running the city.

Joyce Purnick will take your questions here at Gotham Gazette this week. Please email any question to: info at gothamgazette.com; we will post her responses later in the week.

One hallmark of Michael Bloomberg's tenure, journalist Joyce Purnick writes in her new biography of the mayor, has been to pursue "bold projects full of political risk." That includes shaking up the city's schools and all but banning smoking. The following edited excerpt from "Mike Bloomberg: Money, Power, Politics" (PublicAffairs) looks at one instance where Bloomberg could not make his vision a reality.

Michael Bloomberg wanted his mayoralty to be defined by big moves -- the ban on smoking, the revitalizing of the schools and, most spectacular of all, luring the 2012 Olympics to New York.

New York has never hosted the Olympic Games. The very idea of staging the Olympics in New York drew yawns. While New Yorkers backed the idea of the Olympics bid, there was no excitement, no wellspring of support for it in the city.

Deputy Mayor Daniel Doctoroff was having none of New York's trademark diffidence. He'd had a light-bulb moment in 1994, while watching a World Cup soccer match at Giants Stadium. "The stands were packed with screaming, flag-waving Italian and Bulgarian New Yorkers. I wondered, why hasn't New York ever hosted the Olympic games?"

Doctoroff founded NYC 2012 to promote an Olympics bid. Bloomberg became a donor, a board member and his mentor. Tall and handsome, Doctoroff left a managing partnership of an investment firm to join the administration as the mayor's $1-a-year deputy for economic development. Bloomberg was profoundly influenced by him -- unduly so, as far as critics were concerned.

Doctoroff knew that mishandled, the Olympics could be a drain on the city's finances. But handled right, the games could remake a city. As Doctoroff saw it, sections of New York would stir to life in preparation for the games through upgraded zoning and improvements.

His centerpiece was an ambitious plan to transform a neglected section of Manhattan from 30th to 42nd Street west of Eighth Avenue into a sparkling new neighborhood. The Olympics plan was to be a catalyst for new roads, a Park Avenue-like boulevard, office towers, hotels, luxury apartment buildings, parks, a subway extension and expansion of the Jacob Javits Convention Center.

At the heart of the plan would be a "multi-use facility" with a retractable roof to lure the Olympics, return the Jets football team from New Jersey and accommodate conventions. The Jets were to contribute to the stadium's cost, but it would take at least $600 million more in public funds and the approval of the state power brokers in Albany -- the infamous "three men in a room."

Just about any major undertaking in New York State involves the governor and the leaders of the two legislative chambers. They control the obscure Public Authorities Control Board that must coordinate all public spending, and any one of the three has veto power.

Gov. George Pataki, a Bloomberg ally, posed no problem. The leader of the Republican-dominated Senate, Joseph Bruno, could probably be won over if the leader of the Assembly came along. Unfortunately for Doctoroff and Bloomberg, the third member of the Albany troika was the speaker of the Democratic Assembly, the powerful, elusive and cagey Sheldon Silver.

When it comes to almost anything of political importance in New York State, the frustrating guessing game is always, what will Shelly do? Silver knows politics like Bloomberg knows finances. It took the mayor a while to realize it, but he had met his match.

Doctoroff and Bloomberg, impatiently pursuing the Olympics, ignored the local community boards, bypassed the City Council and focused instead on gaining support from high-rolling business executives and construction union.

Their strategy, however efficient, failed to build consensus. Their project arrived in Albany with few allies, leaving Silver even more flexibility than usual.

Developing the far West Side of Manhattan was not to Silver's liking. He wanted state resources funneled to Lower Manhattan. Ground Zero lies in the heart of his district, as does Chinatown, which suffered greatly after 9/11. Months passed before Bloomberg and Doctoroff realized the speaker had to be energetically wooed -- and by the time they tried it was too late.

The Olympics plan had plenty of opposition, as development always does in New York. Community residents and some city planners were sure that an Olympics-size stadium was far from the best use of such valuable land, while businesses and leaders of industrial unions embraced it as a generator of jobs and economic activity.

The battling factions might have neutralized each other if not for the most potent of the opposition. It came from the rich and powerful Dolan family. The Dolans, Silver contributors, control Cablevision and Madison Square Garden. They saw the stadium as competition to their arena and mounted a costly campaign against it.

Silver raised concerns about the plan but portrayed himself as neutral, the better to wrench a series of concessions from Bloomberg. As his associates winced, Bloomberg attended the bris of two Silver grandsons, paid a condolence calls when the speaker's brother died, renewed his support for a new public school downtown and endorsed a package of generous business subsidies for lower Manhattan.

The day before the crucial vote, Bloomberg and Silver both attended a charity breakfast in the Roosevelt Hotel. The two met in a side room and the mayor pushed, cajoled, persuaded and refused to give up.

Next day, Silver and Bruno's representatives to the Albany control board abstained from voting to fund the stadium. And so it died. When asked it the stadium deal was really done, Silver replied with a wicked grin, "It was never alive."

Bloomberg was furious. "You think you have an agreement with him and then Shelly sticks out his hand and says, 'Wait a minute. One more thing.' The city suffered at Silver's hand," he charged.

New York's Olympics submission no longer had its dream stadium. The Olympics dream collapsed, and the designation finally went to London.

The stadium failure stands as Bloomberg's greatest miscalculation and embarrassment. Doctoroff and Bloomberg misjudged not just the politicians but also ordinary people.

The public did not want that stadium. One poll found that 58 percent of New Yorkers opposed the stadium and an even larger percentage was less likely to vote for Bloomberg because of it.

Paradoxically, by shattering Bloomberg's Olympics dream, Sheldon Silver saved Mike Bloomberg from himself. His veto was cast five months before Election Day. It removed the greatest obstacle to the mayor's election.

From the book Mike Bloomberg: Money, Power, Politics by Joyce Purnick. Excerpted by arrangement with PublicAffairs, a member of the Perseus Books Group. Copyright Â© 2009.

Correction: Due to an editing error at Gotham Gazette, this article originally said the stadium vote was five days before Election Day; it was five months.