When Mayor Michael Bloomberg announced a plan for New York City in the year 2030, he said it was needed because the city will be getting much bigger, the infrastructure will be getting older, and the environment will be at risk. Plan NYC 2030 (or, the way the Office of the Mayor actually writes it, plaNYC) is based on the prediction that in the coming decades there will be a million new residents requiring some 265,000 new housing units.

Only once before has there been something similar â€“ a master plan known as The Plan For New York City, in 1969 â€“ but it was never approved. For the first time in the city’s history, City Hall is focusing on:

â€˘ the long-term environmental and health effects of growth (both past and present)
â€˘ how the city’s energy and transportation systems can sustain quality of life and new growth
â€˘ the potential impacts of global warming.

It remains to be seen, however, whether this unique planning effort is itself sustainable, and will lead to policy changes that last beyond 2008, when voters will elect a new mayor. That will depend on the extent to which the process can include and engage people in the city’s diverse neighborhoods and reflect their needs and aspirations.

Focus on Growth: What If NYCâ€¦Shrinks?

The basic premise of PlanNYC2030 is the prediction that there will be another one million residents by the year 2030. Who says so? How do we know? Well, demographers at the NYC Department of City Planning (DCP) say so. How did they figure it out? They did a pretty good job of detailing the way the population changed in recent census periods, breaking it down by age group and borough. They calculated birth, death and migration rates. But to establish the baseline trends â€“ the rates of population change â€“ they used the trends from 1980 to 2005. It just so happens that this period is one of relatively high growth rates, compared to prior decades for example. But they could have gotten the same result by taking a ruler and drawing a straight line on a graph; actually any one of us can do that. 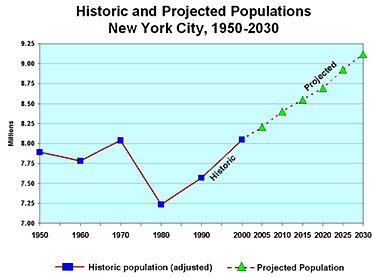 DCP’s demographers may be right in projecting continuing growth at the same rate. Or they may be wrong. Global, national and regional trends could shift in unforeseen ways as they have in the past. Migration trends are the most subject to variation. But even if the city’s demographers are right, this is a questionable way of using population projections to do planning.

In the January 2007 issue of Planning Magazine, a publication of the American Planning Association, Chris Williamson notes, “A projection that assumes past development rates will stay on course is really a policy recommendation to continue developing at past ratesâ€¦.If a city plans to a projection, is it also implicitly recommending growth policies for future city councils?”

There is nothing wrong with doing plans to meet projected growth, but the public should know from the start not only what assumptions are made in doing the projections but that the projections would be different under other assumptions. For that reason many planning offices prefer to run several scenarios using different assumptions. Williamson notes, “Planners and others who create and use projections should be aware of the implied assumptions and should prominently list and discuss them rather than let them remain unstated or buried in a technical appendix.” The assumptions for NYC2030 are indeed buried in a technical report prepared by DCP.

The city’s growth scenario will appeal to the economic sectors that thrive on growth â€“ real estate, finance, construction, and some services. By starting with this scenario and not exploring other possible scenarios, NYC2030 is silently making a major policy decision that favors what some have called “the growth machine.”

What if the population remains stable? This question would force planners to focus on the improvement of life in the city as we know it, and away from the task of accommodating new construction. Is it unthinkable that the population could even decline a bit? While the thought of a shrinking population base conjures up images of widespread neighborhood abandonment during the 1970s, that doesn’t have to happen in the 21st Century. Many European cities, for example, have lost population or remained stable without suffering abandonment. It all depends on public policy.

NYC2030’s projected growth rates by borough are also based on implicit policy decisions. The Bronx is projected to grow at the slowest rate and Staten Island the fastest. Staten Island, the borough with the most available land for development, would absorb much less growth than it could. That’s a decision that continues, without further discussion, a city-wide land use policy that concentrates density around a small number of downtown centers instead of building centers for neighborhood living throughout the city.

The Mayor’s decision to focus NYC2030 on sustainability is both unprecedented and bold. Other cities like Boston, Chicago, Seattle and Los Angeles are ahead of New York, but it’s never too late to raise the basic sustainability question as defined by the United Nations: how can we meet current needs without compromising the needs of future generations?

NYC2030 starts with reasonable assumptions that with or without growth the city faces ten daunting challenges:

Goals are proposed for each of these areas.

Noticeably missing from the list, however, are things like education, city services (especially sanitation), public health, noise, and neighborhood preservation -- items that typically appear on the top of the lists of complaint by New Yorkers.

However, NYC2030 does put on the agenda issues that are of crucial concern to many community, advocacy and environmental justice groups but have often been left out of high-level policy discussions. These include the asthma epidemic, brownfields reclamation, power plant siting, and the lack of open space, all of which are of special concern to low-income communities.

The Role of Neighborhoods and Community Boards: Whatever Happened to the City Charter?

The mayor’s office has launched a series of meetings for community leaders and civic groups in each of the five boroughs to discuss the plan. However, it is not at all clear whether this will lead to any changes in the plan, and if so who will make those decisions. NYC2030’s website makes it all sound like a harmonious process in which we all join arms and march into the future. New Yorkers can submit their comments on the website, but how do these get digested and acted upon?

This leads us to a bigger question of how the plan gets approved and implemented. Will it get submitted to the City Planning Commission, City Council, or the voters for approval? Will the plan be anything more than the Mayor’s swan song before he moves on to his next job? Will the next mayor care? Where is the city’s capital and expense budget process in all this? And the city’s 59 community boards?

NYC2030 evades entirely the mechanisms set up in Section 197-a of the City Charter to produce and approve plans. City Hall may not like those mechanisms but they are the only ones we have. Without them the Mayor’s plan could become just one chief executive’s boardroom strategy that provides some guidance but has no teeth.