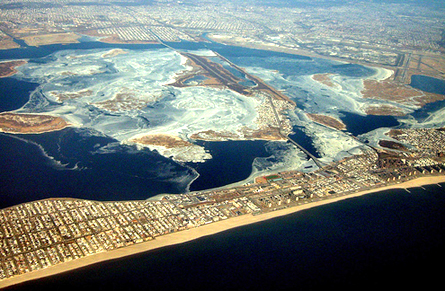 The Rockaway Peninsula: Isolation within the city limits

For close to a quarter of a century Richard George has sat at the kitchen table of his bungalow in the Rockaways and filed reams of lawsuits to attempt to preserve the Queens beachfront community known as “the poor man’s Riviera.”

For years, George’s efforts were geared largely toward the preservation of the bungalow colonies — the 119 remaining wooden cottages built on landfill in the Atlantic Ocean at the turn of the century and used by New Yorkers seeking a quick and affordable getaway for decades afterward. Lately though, the stakes have been raised. As the city offers incentives to developers to build housing on some of the last remaining plots of vacant land in the city, George fears great â€“ and what he sees as catastrophic â€“ change in the community.

About a half dozen developments have just gone up or are planned for the area. One, The Wavecrest II, a seven-story apartment complex, sits directly adjacent to George’s bungalow on Beach 24th Street. George claims such buildings are swallowing the views of the Atlantic and even making it harder for residents simply to go to the beach. The developers have blocked or built over streets, so getting to the sand or boardwalk can require a long, roundabout walk.

In response to these pressures, in late 2003, George, along with John Baxter, the somewhat eccentric owner of the Baxter Hotel in Far Rockaway, filed suit, charging that the city’s actions in the area violated its own Waterfront Revitalization Program. They lost the case but plan to appeal.

“Developers rule the roostâ€¦.No matter what they do, they win. The city allows developers to build almost anything they want,” Baxter said. “We know we are never going to win, but we are going to keep filing these lawsuits until somebody listens to us.”

For his part, George is particularly peeved about one of the largest developments, Arverne by the Sea, located on 117 sandy beachfront acres. A contract for the land was awarded late last year to Benjamin Beechwood LLC in hopes it would include 2,000 apartments and help Mayor Michael Bloomberg meet his goal of providing 165,000 new affordable homes in the city.

“Today we see the future of Rockaway,” said Queens Borough President Helen Marshall, at the ribbon cutting ceremony for the development two years ago. “After a generation of hopes and promises these homes are proof that the renaissance of the Rockaways has finally begun. It will continue to flourish with thousands of new homes, recreational and retail facilities and a great natural resource—the beloved beaches of Rockaway. Arvene by the Sea provides attractive quality housing with the Atlantic Ocean for a front porch.”

But as is so often the case in this rapidly changing city, existing residents see something quite different. “They want to demolish these structures [the bungalows], which are constructed to fit in with the landscape --they are low rise, the materials have lasted almost a century, they are protected from hurricanes—and replace them with these monstrous structures,” George said.

“What’s happening in Rockaway is the same thing that is happening all over to beachfront communities in the city,” said Baxter. He fears the developed will go on to create create private gated communities. “That’s what they are doing,” he said

A resident of the Rockaways for 45 years, Baxter is among the old timers who believe the developments will spoil the character of the Rockaways. But while almost everyone agrees that change is coming, if not already here, some think it is precisely what the area needs.

PEOPLE ON THE EDGE

An isolated peninsula straddling the borders of Queens and Nassau County, the Rockways include communities like Broad Channel, Jamaica Bay, Belle Harbor and Far Rockaway. It was originally developed as a summer vacation resort for luxury and middle class residents to escape from the hotbox of the city. But in the 1960s, the city constructed a number of low-income housing projects in the area. These projects, which include the Edgemere houses and the Beach 41st Houses, were plagued by turf wars and drugs as residents struggled with poor access to good schools, hospitals or social services. 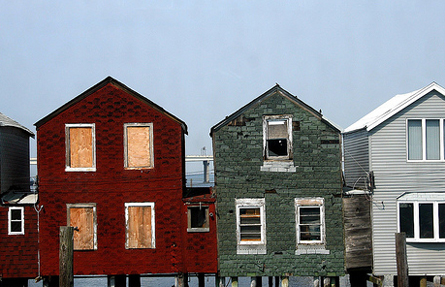 Now, with record high housing prices throughout the city, a number of New Yorkers are willing to consider the distant community a viable place to live. “I find it kind of funny that they are starting to ship rich people out here because there is nowhere left for them in the rest of the city anymore,” said Lenore Martins, a resident of the Beach 41st Street houses in Far Rockaway.

Rich may be overstating it. Though Arverne by the Sea includes luxury housing, its 2,300 one and two family homes and mid-rise condominiums largely will offer middle-class housing, giving those lucky enough to win a lottery a chance at ownership. When completed the mixed-use development will include 270,000 square feet of commercial space, retail stores, a supermarket, a YMCA and parkland.

“This new oceanfront community complete with affordable housing, commercial and recreational spaces, will bring jobs and homes for the entire Rockaway peninsula. We will help thousands of teachers, police officers, firefighters, nurses and other moderate and middle-income New Yorkers to realize the American dream of owning their own home,” Mayor Michael Bloomberg said at the groundbreaking of the Arverne YMCA late last year.

Many Rockaway residents believe the YMCA and the other amenities that will accompany projects like Arvene, including possible ferry service, would bring sorely needed economic development and resources to the community 20 miles from Manhattan.

“I would be happy if the ferry service came to the Rockaways,” said Martins. “Of course, you do know they are not bringing the ferry service out here for us, but because of that new little development they are bringing in. â€¦ But if that’s what it takes, that’s what it takes.” She added the development could be a “good thing if it helps get us some services all the way out here.”

But other residents resent the luxury housing.

“My problem is basically that they are building all these high-dollar developments when they have never paid one bit of mind to us. They didn’t care that the young people here don’t have any chance at a good education, or about all the drugs run through here or the people dying on the streets,” said Peter, a resident of Beach 41st who preferred not to be further identified. 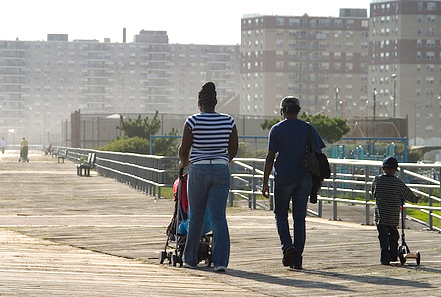 The Boardwalk: Strolling on the "poor man's Riviera"

There have been rumors of tension between residents of the low income housing projects and those of Arverne by the Sea. “I think there was a scare over some gunfire a while back,” Martin said. “Unfortunately that kind of thing happens out here sometimes. It’s been different out here for a while. The people that moved into the developments either have to be willing to stomach it or have to have a sense of humor about it—look at it as the great Wild West or something.”