Daniel Doctoroff, the energetic and affable deputy mayor for economic development and rebuilding, announced in early December that he is resigning after six years in that post. The press and others immediately reacted with talk of a legacy comparable to that of Robert Moses, the 20th century master builder who developed many of the city’s roads and bridges, public housing, and parks. Mayor Michael Bloomberg stated that Doctoroff’s development projects, unlike those of Moses, were not linked to the bulldozing of neighborhoods. 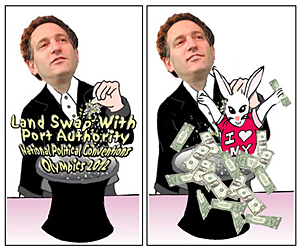 Doctoroff’s other admirers pointed to major development projects that took shape under his mandate as evidence that the deputy mayor had overseen an urban “renaissance” â€“ Hudson Yards and Midtown West, the rebuilding at Ground Zero, the Bronx Terminal Market, new stadiums for the Yankees and the Mets, and proposals for Willets Point in Queens, the Columbia University expansion and Atlantic Yards in Brooklyn. While Doctoroff’s efforts to bring the 2012 Olympics and a professional football stadium to the city ultimately failed, his record as an indefatigable advocate for growth and development is unmistakable. His detractors no doubt breathe a sigh of relief that many more of his grand visions are far from becoming reality. The New York Times, the Observerand other local papers talked of a mixed legacy.

Whatever Doctoroff’s accomplishments may be, the comparison to Moses is a stretch, and the talk of Doctoroff legacy premature by decades. Moses spent over half a century building public infrastructure while Doctoroff spent little more than a half-decade promoting mostly private commercial and residential development. Moses built enormous amounts of low- and moderate-income housing while Doctoroff’s affordable housing program has not been robust enough to prevent a net loss in affordable units. Moses developed broad citywide plans and strategies for his projects, Doctoroff relied heavily on zoning changesto spur private market growth. Moses of course thrived at a time when public subsidies for development were abundant, while Doctoroff worked at a time when development was expected to be initiated by the private sector with the government serving as facilitator, junior partner and deal broker. Making any judgment about Doctoroff’s legacy would be premature until the full impact of his projects and initiatives on the lives of New Yorkers can be assessed. Doctoroff made many proposals -- particularly his major one, the redevelopment of Midtown West -- that he himself claimed would take several decades to reach fulfillment. Much can change in that time. Also, it will be difficult to separate Doctoroff’s legacy from that of the mayor with whom he worked so closely.

There is one major striking similarity between Moses and Doctoroff â€“ they both claimed a monopoly on grand visions and overlooked the diverse ideas emerging from the city’s neighborhoods. Doctoroff reached out to civic leaders and neighborhood groups in a way that Moses never did. But rather than encouraging a two-way dialogue between City Hall and those who might oppose its decisions, Doctoroff's outreach usually resembled a public relations campaign to sell people on decisions that were already made. According to Greenpoint/Williamsburg community activist Phil DePaolo, when the city was pushing its waterfront zoning in that area, “Doctoroff met just with the groups that would get housing and not with others.”

The mayor’s claim that Doctoroff, unlike Moses, spurred development without bulldozing neighborhoods is only partially true. Unlike Moses, Doctoroff did not enjoy the huge largesse of a federal urban renewal program that would have enabled him to buy up private property. In today's era of privately initiated development schemes, real estate developers for the most part have to do their own land assembly and bulldozing. The public sector's role is to approve the rezoning to make the development possible, and Doctoroff was more than willing to do that.

By standing by without intervening, Doctoroff gave the city’s blessing to a number of major projects in which the Empire State Development Corporation, a state authority, promised to use its powers of eminent domain to bulldoze residential and industrial properties. Forest City Ratner’s Atlantic Yards project in Brooklyn and the Columbia expansion in West Harlem are the most notable of these projects. In Willets Point, Queens, the city itself proposes to use eminent domain to displace 225 businesses and 1,800 jobs in favor of a hotel, convention center, and giant commercial and residential complex. Any claims that Doctoroff promoted development without displacement must ignore the secondary displacement that occurs when large-scale private development forces rents and property values so high that people cannot afford to stay in their neighborhoods.

Perhaps the strongest argument for a Doctoroff legacy is PlaNYC2030, launched on Earth Day 2007. This long-range plan was clearly a priority for the mayor, but Doctoroff’s office played a central role in developing it. It is the first attempt at a strategic long-range plan in the city since the 1969 Master Plan, which was never approved. It is certainly too soon to assess the results of a plan that looks to the year 2030, but Doctoroff’s approach raises questions about how long the proposals will survive after he and Bloomberg check out of City Hall.

The emphasis on sustainability and environment in the 2030 plan seems to flow from a long-term vision of large-scale real estate growth. Not long before the 2030 plan was released, the city’s Web Economic Development Corporation released a study by former City Planning Commissioner Alex Garvin that projected a vision of future growth around major transit hubs and over rail yards, leading to the dubious premiseunderlying the 2030 plan that the city’s population would increase by one million people. The Garvin report also noted significant deterrents to growth â€“ lack of quality public space, traffic congestion, and pollution â€“ that would later become a major focus of the 2030 plan.

In the plan, Bloomberg and Doctoroff pushed the concerns about long-term sustainability to the forefront in strategic planning for the first time. But without the predicted growth what will happen to sustainability and environmental and public health objectives? And will the laudable environmental goals be achieved only in those areas targeted for new development?

Even more problematic, however, is the fact that the next mayor, and his or her deputy mayors, could easily discard or overlook the 2030 plan. Even if they formally acknowledge the overall goals of the plan, they can ignore many specific objectives and programs. While any mayor has the power to undo the actions of his of her predecessor, the way Bloomberg and Doctoroff devised the 2030 plan make its future especially risky.

The plan was the product of the mayor’s office and its consultants, not an open, public process of decision making. Instead of subjecting the plan to extensive discussion, debate and a vote, Doctoroff's staff made colorful presentations throughout the city, received comments on those presentations and rarely engaged in a back-and-forth dialogue. Certainly encouraging discussion, debate and votes by all of the city’s 59 community boards and the City Council might have been messy. The result, however, would likely have been a richer and more developed plan reflecting the visions of many more New Yorkers. This, in turn, would have left made many more people committed to its goals and objectives. While the plan might have taken longer to approve, it would have stood a better chance of getting implemented.

The deputy mayor’s tendency to favor public relations over community dialogue seems to have been central to his style. A community board member in Brooklyn, who asked to remain anonymous because she is looking for a job in the public sector, told me, “Even in the Giuliani administration, which wasn’t interested in talking with communities, we could talk frankly with some city officials, but with Doctoroff it was all showâ€¦.It was all about him, his rezoning and his development.” This person noted that when Doctoroff first met with community representatives to promote the Olympics 2012 plan, he was much more open to discussion, perhaps due to the premium placed by the International Olympic Committee on having sites that would remain as lasting legacies after the games are over.

Many press reports about Doctoroff’s resignation and new position as president of Bloomberg LP, the media company founded by the mayor, centered around potential conflicts of interest because of Doctoroff’s intention to remain involved in the Hudson Yards, Queens West and other large-scale developments that he helped to shape. City conflict of interest rules restrict the direct involvement former city employees (paid and unpaid) can have with projects they worked on while in government. While Doctoroff is waiting for a ruling by the Conflict of Interest Board, most commentators seem to have missed the more important issue.

The more serious question for city policy â€“ and this is clearly a legacy question â€“ is whether Doctoroff has successfully blurred the lines between public and private sector to the point that public officials at the highest levels no longer have to be held responsible for representing anything that might be vaguely denoted as the “public interest.” Doctoroff’s close personal ties to the CEOs of the city’s largest developers, who have benefited from rezonings, tax relief and subsidies from the city, may not strictly violate any laws, but when the discussions that matter and lead to policy decisions are made in the board rooms and not the community boards, the temptation to act in the interest of private developers is great.

In an interview with Dominick Carter of NY1, Doctoroff spoke proudly of the expanded “portfolio” of agencies that Bloomberg had placed under his command at the start of the mayor’s second term. But was this former investment banker thinking of the agencies under his mandate in terms of the banker’s bottom-line or the public official’s mandate to serve the city and its neighborhoods?