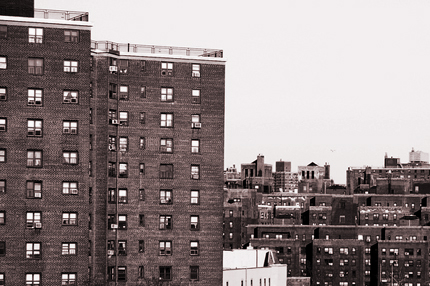 Photo (cc) Paul Goyette
Affordable housing is becoming harder to find across the board.

A city cannot be truly sustainable if people do not have safe, healthy, and affordable places to live in it, so any serious plan for the city's future must focus on providing homes for households at every income level - especially the 36 percent of New Yorkers with incomes of twice the federal poverty level or less. These are the people with the greatest unmet needs, and their needs can only be met through planning and government action, because the market on its own will always fall short.

Unfortunately, however, we are moving in the wrong direction. The supply of housing affordable to the city's low-income households is eroding rapidly, not only in a few gentrifying neighborhoods but everywhere.

Even public housing is under threat. The New York City Housing Authority has a $195 million operating deficit due to severe underfunding by three levels of government - city, state, and federal.

Worst of all is the loss of affordable rent-controlled, rent-stabilized, and unregulated housing. The U.S. Census Bureau's New York City Housing and Vacancy Survey shows that we are now losing 30,000 rent-regulated apartments affordable to a family of four with a yearly income of twice the federal poverty guideline. And we are losing similar unregulated apartments at a rate of 28,000 per year. The New Housing Marketplace Plan is producing some new apartments at a comparable rent level (up to $968 a month in 2005), but not nearly fast enough.

The High Cost of Lost Housing

This loss of affordable housing is hitting low-income households hard. Even in economic good times, income gains are being outstripped by rent increases. And in bad times, disaster is right around the corner. The Housing and Vacancy Survey shows that poor households have persistently high rent burdens. In 1996, the median poor household in an unsubsidized apartment paid 63 percent of its income as rent. In 2005, that figure was 62 percent.

Meanwhile, near-poor households, with incomes from 101 to 200 percent of the federal poverty level, have been falling farther and farther behind. In 1996, the median household in this group paid 36 percent of its income as rent, but by 2005 that figure had risen to 42 percent. The sad truth is that these New Yorkers are rapidly falling into the dire situation of the poor. Two thirds of near-poor households and one third of poor ones are working, but high rents are consuming the benefits of work.

These rent burdens translate into real hardships for low-income people. For six years, the Community Service Society has been conducting an annual "Unheard Third" survey of low-income New Yorkers. The survey makes it possible to see the impact of the affordable housing shortage in terms of hardships like falling behind in rent, having utilities cut off, doubling up with another family or staying in homeless shelters.

The survey shows that in 2002 and 2003, 46 percent of poor households experienced at least one housing hardship. By 2006 and 2007, that figure had risen to 50 percent, despite the fact that the city's economy improved markedly during this time period.

Reversing this disastrous loss of affordable housing is the first order of business for housing policy. If the city's population is going to grow by a million by 2030, as city planners project, that probably will include some 125,000 more low-income families, unless there is an unanticipated change in the city's job mix as well as patterns of migration and demographic growth.

The bottom line is that we need to turn a loss of over 60,000 affordable apartments a year into an increase of 6,000 a year. This challenge will require an enormous increase of commitment beyond the New Housing Marketplace.

Solutions like inclusionary zoning and the creative use of government-owned land and existing subsidy streams can help. But real progress also will require a combination of stronger regulation and major new subsidies. That, in turn, will take a significant increase in political will.

For years, city and state office holders have been allowing the rent control and rent stabilization laws to weaken. Programs to create new housing have produced too few apartments, and too few of the apartments created have been targeted for poor and nearly poor households. Now we need stronger rent laws, and large new subsidies to serve low-income New Yorkers.

These are politically controversial, but if we aren't discussing them, then we aren't really planning for New York City's future.

Tom Waters is a housing policy analyst at the Community Service Society.Â