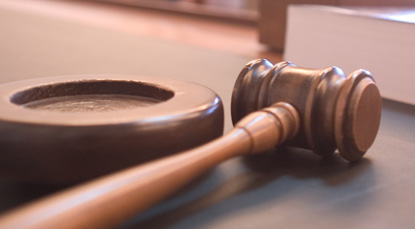 Question: Why it is safer to be accused of a crime and face prison, than to be a tenant facing eviction?

Answer: Because all criminal defendants have a right to legal representation and tenants do not.

It has been 45 years since the Supreme Court of the United States in Gideon v. Wainwright guaranteed defendants the right to counsel in all criminal cases. But this right has not been extended to indigent civil litigants generally, and the courts have repeatedly rejected an expanded right to counsel.

Those who can afford to pay legal fees, whether in criminal or civil cases, always have had lawyers available to them and always will. The constitutional right to counsel in civil proceedings -- whether the litigants can afford it or not -- largely has been limited to situations threatening loss of physical liberty and to certain Family Court and mental health proceedings, usually involving state action.

A resolution of the American Bar Association urges federal and state governments to provide legal counsel as a matter of right, at public expense, to low-income "persons in those categories of adversarial proceedings where basic human needs are at stake, such as those involving shelter, sustenance, safety, health or child custody, as determined by each jurisdiction." No state, however, has enacted the legislation that would create a civil right to counsel.

New York's Family Court recognition of the right to counsel is the broadest in the country, affording counsel in cases involving foster care placements and removals, and denial of paternity for example. A parent who could face jail for being delinquent in child support payments is entitled to counsel, but a custodial parent seeking child support is not.

But the biggest problem, according to Andrew Scherer, executive director of Legal Services of New York City, is in housing evictions and now foreclosures. Suffiicient legal resources, including attorneys, do not exist to meet the tenant demand for representation, and they do not exist partly because there is no right to legal representation.

There are 27,000 to 30,000 evictions in New York City every year, almost all them involving tenants without lawyers. Since there is no right to counsel, "all existing resources put together are not nearly enough to begin to meet the need," says Scherer.

"Government policy establishes when landlords can evict tenants and when they cannot. But then you need the courts, and courts cannot do their work fairly and accurately without counsel on both sides. We value fairness and without lawyers there is no due process," says Laura Abel, deputy director of the Brennan Center for Justice, New York University School of Law.

According to a 2001 study by the City-Wide Task Force on Housing Court, 98 percent of landlords are represented by attorneys in Housing Court. On the other hand 88 percent of tenants are not. But Abel cautions that it is misleading to think that means that even 12 percent are represented, because many tenants who would not have lawyers do not even try to fight their cases. In other words, a very small number of tenants have legal counsel.

Two bills introduced in the New York City seek to provide legal representation to tenants. Councilmember Rosie Mendez would create a mechanism for providing free legal services to indigent seniors (over 62) facing eviction or foreclosure. Councilmember Alan Gerson has introduced a similar bill that is not limited by age. No hearings have been scheduled or action taken on either measure. That may be partly for fiscal reasons since implementing either plan could cost $10 million to $15 million a year.

Abel believes the money would be well spent. "The city will save money or come out even," she says, "because the city loses money when people become homeless, families and children seek shelter, have increasing health problems, receive welfare, go to jail and are dislocated."

While housing is a particularly acute need now, it is not the only area where poor people need representation. "Achieving a right to counsel in civil legal matters involving human needs will correct a fundamental inequity in our justice system," says Scherer, a leading advocate for "a civil Gideon." "By virtue of being poor, you have legal problems." He estimates that one quarter of New York City's population is poor and so qualifies for free legal services in housing, welfare, unemployment, disability and similar issues.

Abel has described the situation as "an issue of democracy and fundamental fairness because a society is not truly democratic, and its justice system not truly just, when its poorest citizens have no access to the protection of its laws. When the result is that families are unable to meet their basic human needs, it can fairly be called an ongoing state of emergency."

While New York State has 147,096 lawyers, with approximately 91,727 of them in New York City (as of 2006, the most recent year for which statistics are available), most represent fee-paying individual and corporate clients. Only about 500 to 700 have jobs representing the underserved population in civil cases, according to Scherer.

Although it is impossible to estimate how many would-be clients don't even try to get legal representation, Scherer says New York's Legal Services turns away four people for every one the organization is able to represent, with 225 lawyers handling 25,000 cases a year. The Legal Aid Society and some other specialized organizations serving particular constituencies based on health, jobs or other identities also provide counsel in civil cases.

While some provisions allow judges to appoint counsel when they deem it appropriate, it does not provide for those lawyers to be paid. This makes the statutes all but meaningless since judges have no way to recruit lawyers willing to work without pay.

Advocates of a "civil Gideon" appreciate help from pro bono volunteer lawyers. The volunteer help only goes so far, however. The privilege of having a license to practice law does not require lawyers to represent indigent New Yorkers or do any unpaid work.

Despite that, many large firms do provide some pro bono services, whether out of social commitments they may have or to assist recruiting, since recent law graduates may find these matters more interesting and compelling than their day-to-day assignments. The firms also are mindful of their standing with the American Bar Association and such publications as the American Lawyer, which rank firms' pro bono activity. The New York State Bar Association encourages all lawyers to devote 50 hours a year to pro bono service and offers "a certificate suitable for framing," as well as a pin and a ribbon.

Major firms may do protracted and complex litigation involving such issues as Guantanamo detainees, international trafficking in the sex trade and asylum seekers. Others may serve a particular nonprofit organization or community organization dealing with domestic violence or the arts, doing transactional work including contracts and leases.

However, these firms and their volunteer lawyers are not usually prepared to handle individual emergencies, such as evictions and foreclosures. They generally do not provide one-on-one services.

And pro bono work does not establish a right to counsel.

In 1975, the Court of Appeals, New York's highest court, said, "Courts and litigants must make do with what exists and with what lies within the powers and capacity of the courts and the Bar." That remains true -- and it means that there is no meaningful right to counsel in civil cases.