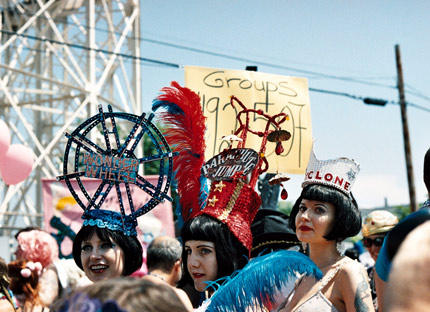 In a city with its share of eccentrics, Coney Island's annual Mermaid Parade is like an early-summer extravaganza: a chance for people of a creative and competitive bent to one-up each other while everyone else revels in how wonderfully strange New York City can get. This year's parade was no different. A 10-year old girl navigated the Boardwalk on stilts while a bearded man in a wedding dress, a fellow in a giant lobster suit, and assorted mermaids, pirates and sea monsters watched from below.

Most — but not all — of the attendees at a Department of City Planning meeting the following Tuesday had changed out of their parade costumes. The meeting was held to gather public comment on plans for the area's much-discussed redevelopment. A animated handful of Coney enthusiasts spoke against a controversial change to the city's earlier zoning proposal for the area. Mermaid Parade queen Savitiri D. deemed the event so important that she staged a hunger strike in a Surf Avenue storefront during the three days between the parade and the meeting.

Almost everyone who spoke agreed that the historic seaside amusement area is in need of radical change. The question is what those changes will entail and how much of the area's unique character will -- and should -- remain.

In 2005, Thor Equities announced ambitious plans for a part of the city that has been notoriously difficult to redevelop: Coney Island's century-old amusement zone. The victim of decades of decline, it went from being the home of Luna Park, Steeplechase and Dreamland to an economically flagging neighborhood dotted with public housing and high-rise apartments. Sitt's plans called for a major turnaround fueled by an indoor waterpark, hotels, up-market retail and new rides. He is gamblig that visitors' will trek to the fringes of Brooklyn for a Las Vegas-style, year-round entertainment district.

The project generated even more controversy in June when the Department of City Planning announced a revised version of a zoning plan first put forward in November of last year. Both the original and revised versions of the city's plan zoned the northern and western sections of Coney Island for mixed residential and retail uses. Meanwhile, the eastern side of Coney Island—the core area between the Parachute Jump and the Cyclone—would be redeveloped as a massive entertainment center, with new rides, a steel roller coaster, a waterpark and a hotel. Landmarks like the Parachute Jump, the Cyclone and the Wonder Wheel would be preserved while the boarded-up Childs' Restaurant and the historic B&B Carousell and Shore Theatre would be renovated and reopened.

The city would take over the land that currently serves as the site of Astroland and would use the property for privately owned rides. The placement of the rides on public parkland would insure that the area remain an amusement park. A long-awaited community center and the expansion of parkland on the southern end of the amusement area were also incorporated into the plan.

The city's zoning plan intends to preserve the amusement area "in perpetuity," although the updated proposal reduced the zone mapped for open amusements from the original proposal of 15 to 9 acres (it now includes 60 acres though most of that is vacant), while expanding the section for enclosed amusements and "entertainment retail." Dick Zigun, the sideshow producer, self-appointed mayor of Coney Island and former director of the Coney Island Development Corp., sees this as a danger sign. He fears the city proposal would open the door for a "mega-mall" in an area that the earlier plan had designated for amusements only.

Zigun resigned his position as a director of the city's Coney Island Development Corp. in June shortly after the city announced the changes to its initial zoning proposal. In his resignation letter, he wrote that the revised proposal endangered the core of the amusement district. "There is almost unanimous dislike of the new plan among amusement park owners, workers and fans," wrote Zigun. "You underestimate the protests, yelling and lawsuits headed your way from a land where legit businesses call themselves Cyclone, Thunderbolt and Tornado."

At the June 25 meeting, opponents of the plan included Reverend Billy from the Church of Stop Shopping, the president of the International Federation of Competitive Eating, performers from Zigun's Sideshows by the Seashore and the vice president of the American Coaster Enthusiasts. All of them claimed that a reduction of the amusement area would threaten the character of Coney Island and make it impossible to build a large, world-class amusement park. They also argued that "entertainment retail" was a backhanded attempt at building a mall, a point emphasized by the anti-consumerist Reverend Billy and others.

Coney Island Development Corp. president Lynn Kelly said that opponents of the revised plan have badly misrepresented it. According to Kelly, right now only five of the 60 acres currently zoned for amusements at Coney Island have rides and games on them, while the rest of the area lies unused. Amusements and other attractions in the "new" Coney Island would not be limited to the nine acres of outdoor rides, she said, but could extend into the eastern portion of the study area. "The fear that Coney East is going to turn into a mall is absolutely wrong," she said.

Purnama Kapoor, the Brooklyn head of the Department of City Planning says that "entertainment retail" will allow for year-round attractions that will complement outdoor amusements.

The real threat to the amusement area, in Kelly's view, comes from people dead-set against long-term change in Coney Island. She cited the anti-development attitudes that led opponents to cheer when pictures of vacant lots were displayed during a city planning presentation. This could be Coney Island's best chance, Kelly said, with the Bloomberg administration, Sitt and much of the community all lined up to support development. If the plan falls apart or Thor, Coney Island's largest landowner, gets impatient with the opposition, she said, the developer could sell its property or lobby the city to allow housing in the core area.

If that happened, it would not be the first time that a Coney landowner opted for housing instead of amusements. In 1964, developer Fred C. Trump (the father of Donald Trump) ordered the destruction of Steeplechase Park in order to construct luxury housing in the area formerly occupied by the decades-old amusement park. Although Trump could not get the area zoned for housing, he is notorious for personally throwing a brick through the glass faĂ§ade of the park's beaux-arts Pavilion of Fun, leading a festive demolition of the building before it could be designated a historic landmark.

The loss of Steeplechase initiated decades of decline for an area that was once one of the country's premier amusement destinations—decades that would shrink the amusement area to 5 percent of its original size and see the demolition of other major Coney landmarks, such as the Thunderbolt roller coaster in 2000. Many in the local community support the city plan, seeing it as a means of maintaining the neighborhood's amusement zoning designation and restoring some of Coney Island's past glory.

"Nobody wants to see the loss of the amusement district" says Community Board 13 district manager Chuck Reichenthal. "The economy of the whole area can benefit as it's expanded and updated." He explained that the upcoming rezoning process has to ensure that the amusement industry has enough space to operate and that the neighborhood remains an affordable place to live and have fun.

Gregory Smithsimon, a professor of urban studies at Barnard College, agrees that any new development at Coney Island should appeal to as wide a socio-economic range as possible. Yet according to New York Magazine, Thor's prospective billion-dollar investment in Coney Island will only pay dividends if retail space and hotel rooms are rented at rates that would attract high-end retail and vacationers with disposable income.

Smithsimon believes that this speaks to one potential weakness in the Coney redevelopment. "It seems as if the only way we know how to do development these days is for upper income users," says Smithsimon. "But that's not urban planning, it's the Wild West."

According to Kelly, the development corportation has attempted to address that issue by including parks, beach improvements, a community center and affordable housing in the redevelopment project. Kapoor said redevelopment will bring overdue improvements to the neighborhood. "It will bring a new park," she says. "Right now the area mapped for the park is a parking lot for the Cyclones' stadium."

Although the rezoning has already generated heated public meetings, opinion articles and debate, the public review process that will allow developers to finally break ground on the new Coney Island has not started yet. In fact, a final zoning text has not even been formally submitted for review.

Prior to land use review, the city investigates the environmental impact of any proposed development and issues a document explaining how the project will alter its surroundings. Right now, the Coney Island redevelopment is midway through the environmental review, which should produce a final zoning text in December. After that, the local Community Board, the Department of City Planning, the City Council and the mayor's office all must approve the zoning before construction can begin.

This process takes around seven or eight months, which means that final approval could come in the spring of 2009, putting the latest of Coney's "master plans" only a few years away from becoming a reality. No matter what happens, it is likely that Coney Island will be a much different place by the project's predicted completion date in 2019.