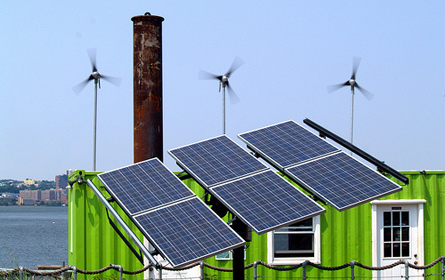 In a nondescript basement office on Essex Street, sandwiched between a check-cashing place and a video store, three business partners nurture their fledgling solar panel company, poised hopefully on the cusp of opportunity.

Edward Yau, a civil engineer, and brothers Jack and Steve Shao, an economist and electrical engineer respectively, all in their 30s, created Tensor Energy Co. last summer. They plan to import Chinese-made solar panels to sell here, and also to provide technical and design support to homeowners and businesses looking to install the systems.

So far, business has been slow to start, but the partners have secured a few contracts for the spring -- a home in Brooklyn, another in Queens and two small commercial jobs. They see opportunity at "the intersection of government policy and public awareness," said Yau.

Much like this startup company, the Bloomberg administration's plan to create a green economy in New York based on jobs that directly improve the environment is gearing up as well. The administration said in October it that intends to double the city's green-sector jobs from 13,800 to 27,600 by 2018.

How successful the city will be or what specific jobs will materialize is difficult to pin down at this point. The city's Workforce Investment Board currently is evaluating how to track jobs created by the mayor's green economy plan, according to a spokesperson for the city Economic Development Corp.

Getting Off the Ground

"All the policy is there and we're now putting in place infrastructure to make it happen," Shobowale said during a recent interview. "We're not in fourth gear cruising down the highway yet, but we are moving out of first and picking up speed."

He pointed to two projects funded this year by the Economic Development Corp. -- one a pilot program in Hunters Point in the Bronx to see how wind turbines work in the city and another providing grants totaling $200,000 to five institutions that agreed to invest additional money in solar-thermal heating systems, including New York Hospital Queens in Flushing and the Julliard School at Lincoln Center.

The push for more sustainable technologies has "now expanded beyond just environmental folks thinking about it, but people see the economic benefits as well," Shobowale said. "There are jobs to be created and businesses to be created out of this."

The Economic Development Corp. and its renewable energy projects are just pieces of the city's larger, multi-pronged plan for a greener economy. In its vision presented to the public last October, the city called on 10 agencies and departments -- including parks, buildings, the City University of New York and the mayor’s office -- to take on specific tasks.

The theory is that multiple programs run by different departments -- from tax incentives to career training to building code changes -- will fit together like cogs in a piece of machinery that eventually will churn out jobs.

Take, for instance, the project in Hunts Point, which was awarded to Urban Green Energy, a New York City wind turbine company with factories in China.

Nick Blitterswyk, the company’s co-founder and CEO, sees great potential for wind power in New York City. In fact, he said the city’s rooftops served as inspiration when he and his partner formed the company, which does business around the world. He is grateful that the city is exploring wind as an energy source. However, he said the current project -- to measure wind speeds from a warehouse roof and then to install one test turbine in May -- is small in scale. The company is using existing staff and has not hired anyone as a result of the contract, he said. Larger contracts here have been slow to materialize.

"We haven’t had as much pick-up as we'd like," Blitterswyk said. "There have been a lot of businesses that don't want to be first. They want to see it done first by someone else."

Shobowale said the turbine pilot program is just a first step. It allows the city to study the potential of wind power and then set protocol so its use can be expanded. Before the city can move to large-scale use of alternative energy sources such as wind turbines, he said, building codes need to be adjusted.

The administration recognizes the need to make code changes in order to facilitate the greening of the city. A year and a half ago, the city commissioned a task force, led by the non-profit Urban Green Council, to recommend changes to building, construction and energy regulations to help the city meet the administration's goal of reducing New York's carbon emissions by 30 percent by 2030.

The task force delivered its 600-page report to the mayor’s office and the office of Council Speaker Christine Quinn in February for their review and future action, said Russell Unger, executive director of the Urban Green Council. Several of the recommendations -- including one that suggests all new commercial tenant space over 10,000 square feet be metered for electricity -- were already included in the city's Greener, Greater Buildings Plan, which became law last December, he said.

One other piece of legislation stemming from the Green Council's report was adopted in March when the mayor signed into law a bill that creates an Interagency Green Team and Innovation Review Board whose mission will be to facilitate the use of new green technologies and construction techniques in the city.

The Green Council report's other recommendations range from requiring builders to insulate the exteriors of high-rise buildings to adding temperature controls individual apartments so residents no longer have to open windows in the winter to cool down overheated homes. "The vast majority of the proposed changes to the code would kick in when someone does construction or renovation," Unger said.

These code changes, if adopted, would lead to more jobs in the city, Unger said. He explained that as more people make energy-saving improvements to their buildings, the cost of materials will drop, leading even more people to take the same steps therefore driving the demand for more workers such as architects, engineers and heating and lighting specialists.

"If everyone is doing it, it is going to reduce the cost of materials therefore lowering the barrier to doing work," he said.

One setback in the mayor’s green economy plan came last December when the administration -- faced with intense opposition from building owners -- dropped a provision in the Greener, Greater Buildings legislation that would have required building owners to pay for capital improvements to increase energy efficiency.

Under the legislation that passed, larger buildings have to undergo energy audits but owners are not required to make improvements. As a result, a plan originally estimated to produce some 19,000 jobs would create far less than that by many estimates.

The owners of Tensor, too, are anxious to see prices for green technology drop, especially in their area of solar PV panels. Even with federal, state and city tax incentives, Yau said homeowners still balk at the initial investment even if they will get most of it back through tax credits and abatements and savings on energy costs.

According to Yau, an average single-family home would need a four-kilowatt system, costing as much as $35,000. An immediate state rebate would cover $10,000, leaving the homeowners to make an investment of up to $25,000.

"There is a market," Yau said. "The people who are installing panels are more affluent and environmentally conscious. They have the cash but lot of people get sticker shock over the fact that they have to lay out $15,000 to $20,000."

To help overcome that, Yau said the administration could facilitate financing for homeowners who wanted to install alternative energy systems, and it could quickly institute those code changes.

"The city needs to make the lives of installers easier," he said. "This type of project is viewed like a home improvement. You need Building Department permits, and regulations are not necessarily geared to solar projects."

Yau thinks that he and his partner are on the right track in focusing their sights on the New York metropolitan area. With the West Coast way ahead in green energy, he sees a vacuum on the East Coast that needs filling, and any assistance from the city would be welcome.

"If there is a will, they can help make it happen," Yau said.